Stocks are now very oversold with some long-term support levels coming into play. Over the last seven trading days, IWM is down 8.69%, SPY is down 6.75% and QQQ is down 5.59%. 10-day RSI moved below 30 for SPY and IWM, but remains above 30 for QQQ. Prior readings below 30 produced oversold bounces in March and June for SPY. As far as long-term support is concerned, IWM moved just below its March-June lows. SPY broke its June low, but remains above its March low. QQQ is well above the March June lows. On the chart below, SPY formed a "V" bottom in March and a consolidation bottom in June. Given the technical damage of the last three weeks, I think the market needs time to heal before we will see a sustainable bounce. This means we are likely to see a consolidation or choppy range before we can expect a bounce. 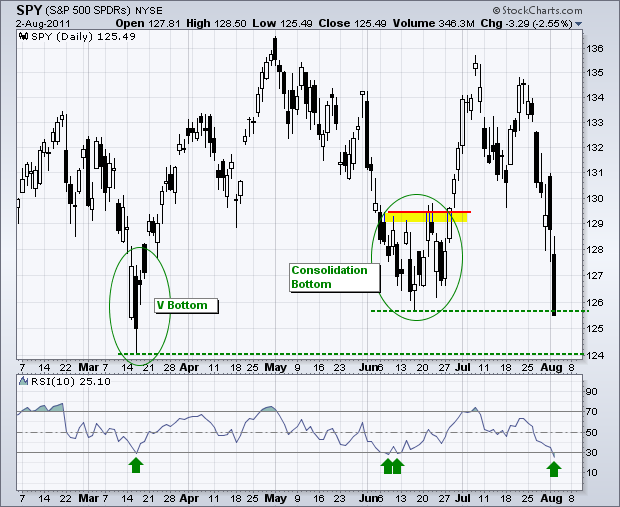 The 60-minute charts show sharp downtrends in IWM and SPY. These downtrends are so sharp it is difficult to establish a solid resistance level upon which to base a reversal breakout. IWM and SPY are basically in falling knife mode – with the blade pointing down. An oversold bounce is the most that can be expected at this point. I would like to see some more price action unfold before setting key resistance and potential support. QQQ may be fairing better, but remains in a sharp downtrend as well. 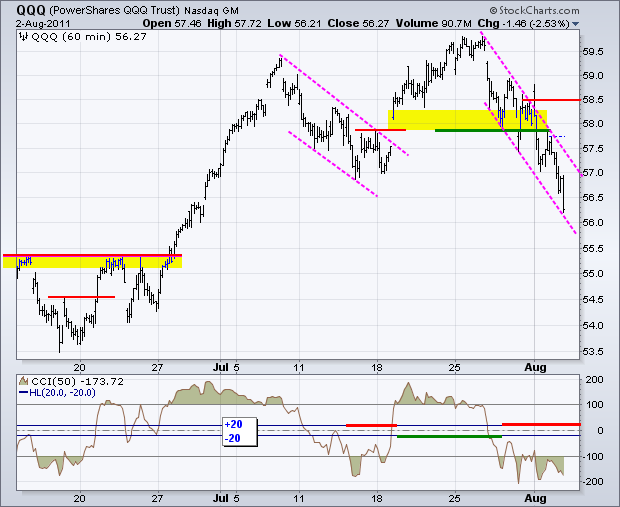 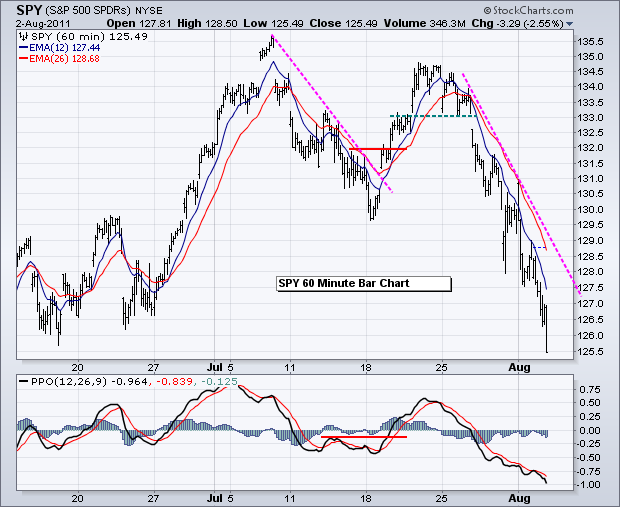 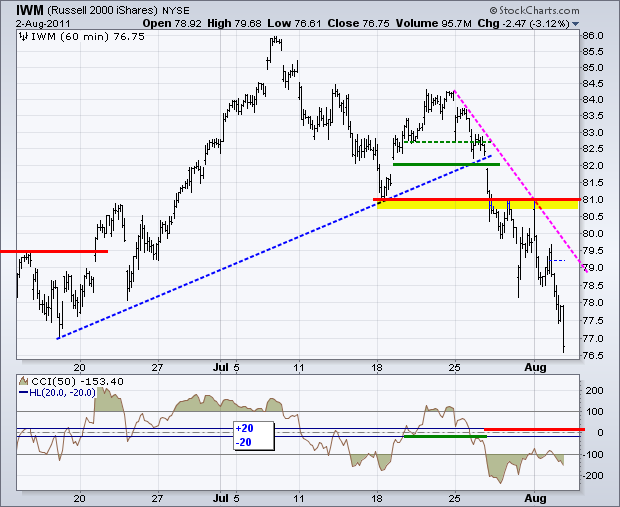 The 20+ year Bond ETF (TLT) soared with a 3% surged above 101.5 on Wednesday. It is to infinity and beyond for bonds (and Buzz Lightyear). Treasuries are benefiting from a flight to safety and weak economic numbers. Bonds are as overbought as stocks are oversold. 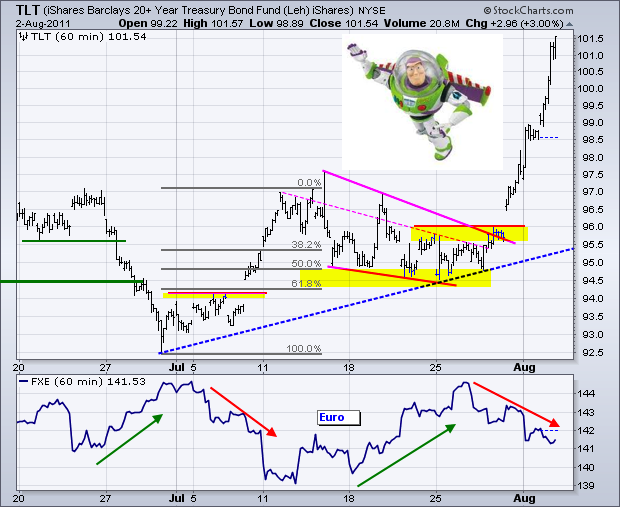 Despite a surge in bonds and decline in stocks, the US Dollar Fund (UUP) barely budged and failed to break above resistance. I would have expected a bigger move in the Dollar with the risk-off trade taking center stage. The inability of the Dollar to breakout is a bearish sign. A rising wedge has taken shape and a break below the wedge trendline would signal a continuation lower. Note that the Euro Currency Trust (FXE) has a falling wedge over the last several days. 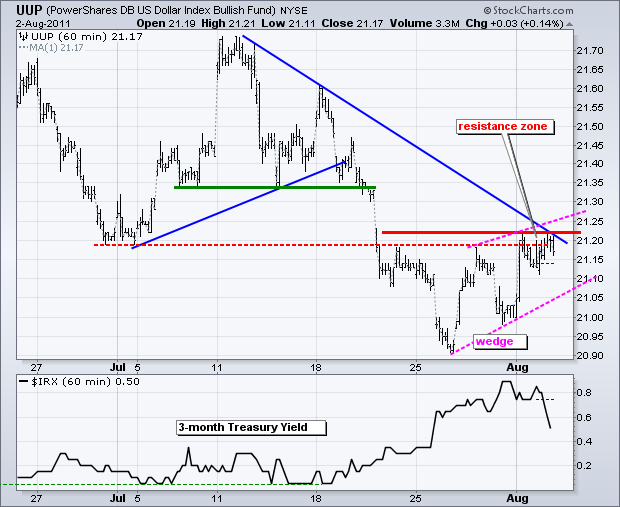 The 12-Month US Oil Fund (USL) moved lower along with stocks. USL is also getting oversold and ripe for a bounce or consolidation. However, oil is likely dependent on the stock market for direction. 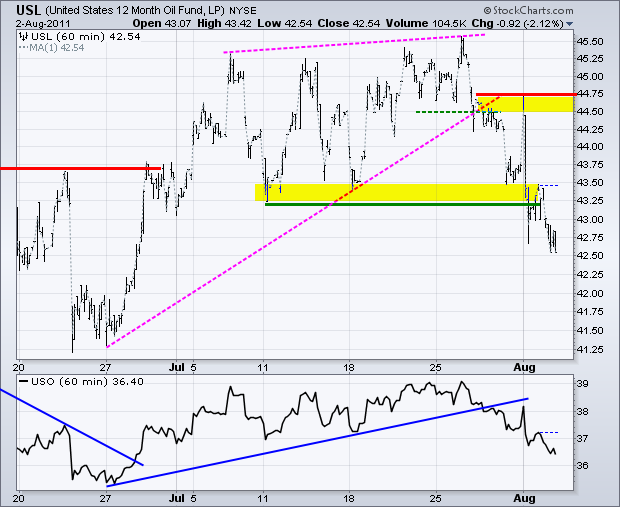 The Gold SPDR (GLD) surged above 161 as the safe-haven bet. Gold remains the alternative to stocks and currencies. Bonds still have their safe-haven status. Think what would happen to gold if bonds lost this safe-haven status. First support has been raised to 157 and key support remains at 154. 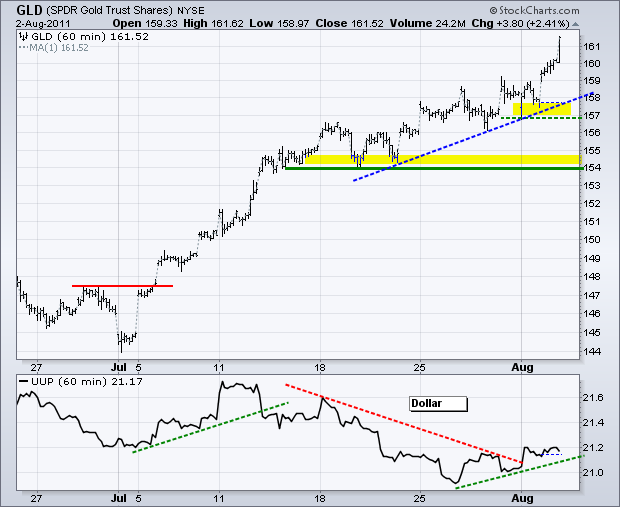