Trading turned quite volatile on Monday as stocks opened sharply higher, moved sharply lower and then recovered somewhat. Despite all this pushing and shoving, the major index ETFs closed slightly lower and all sector SPDRs were down for the day. Stocks did not follow through on the strong open and this is negative. Overall, there was more selling pressure than buying pressure on Monday. Volatility may continue because we have a slew of economic reports to look forward to this week.

The first chart shows QQQ opening above 58.5 in an apparent break above the flag trendline. This break did not last long as the ETF quickly moved back below 58. Led by Apple, QQQ has been the strongest of the major index ETFs. It is still holding up the best, but big techs are not totally immune to selling pressure. The short-term trend is down as long as the flag/wedge falls. Look for a break above 58.5 on the price chart and +20 in CCI to reverse this downtrend. 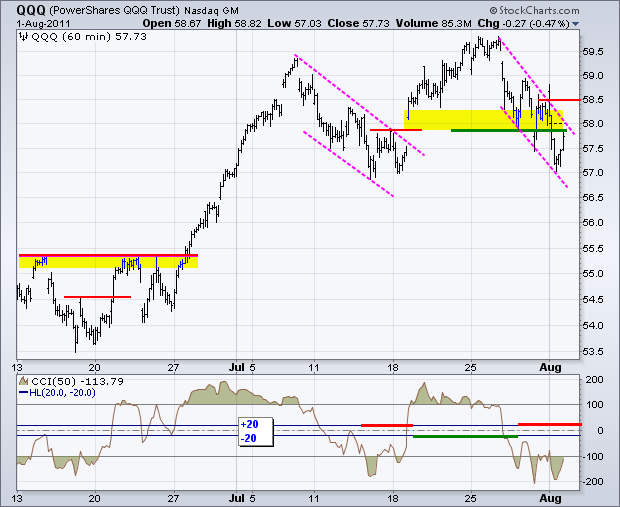 SPY opened near 131 and promptly moved below 128.5 as strong selling pressure took hold. With this pop and drop, I will lower the resistance zone to the 131-132 area. SPY is clearly oversold after a sharp six day decline, but showing no signs of firmness. The Percent Price Oscillator (PPO) is also oversold as it moved to its lowest level since August 2010. The PPO level (.75) means the 12-period EMA is .75% below the 26-period EMA. In other words, the 12-period EMA is the furthest below the 26-period EMA since August 2010. 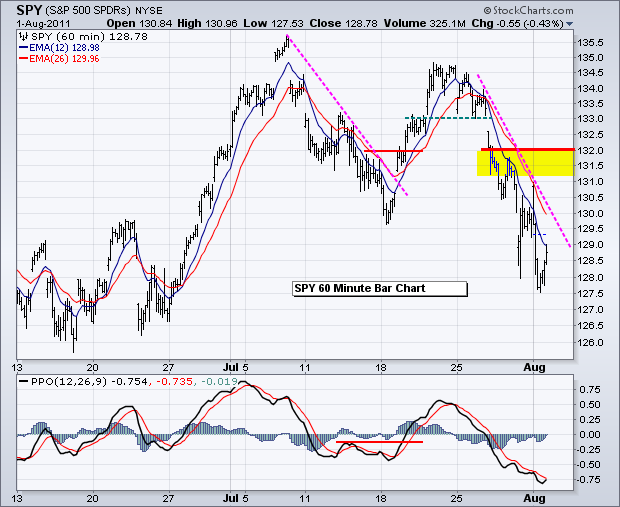 IWM surged to 81 on the open and then plunged back below 79. Even though the ETF held above last week's low, there are no signs of strength here. Key resistance is set at 81 for IWM and +20 for CCI. 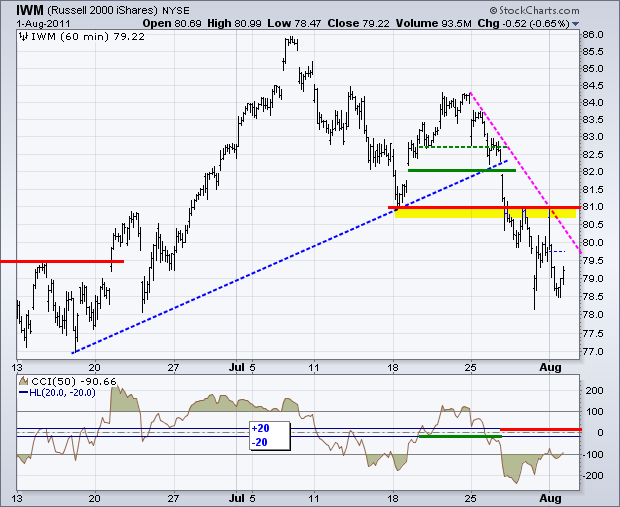 The 20+ year Bond ETF (TLT) has been reacting to the economic situation all along. Even with the debt-ceiling debacle and the hollow threat of default, bonds held their ground and even moved higher the last two weeks. With stocks under pressure and the ISM Manufacturing report falling well short of expectations, bonds surged again on Monday. TLT broke above its June-July highs and hit a 52-week high. No signs of weakness here. 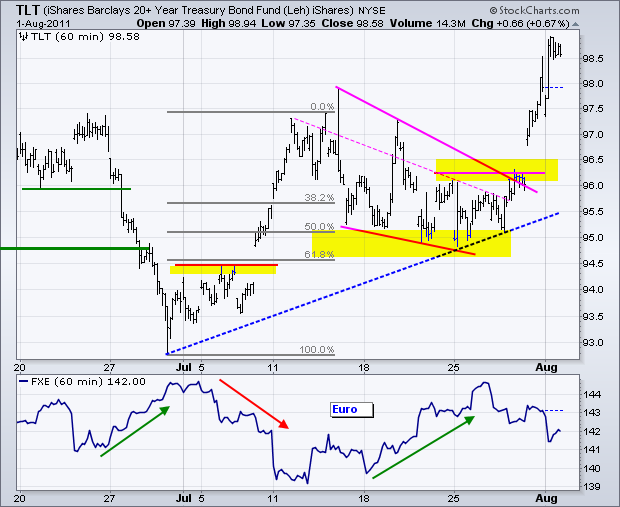 The US Dollar Fund (UUP) moved higher as a flight to quality took hold on Monday. This means money was moving out of the Euro, which caused the Dollar to move higher. It was not so much that money was buying the Dollar. Euro/Dollar has become a contest of the least ugly, not the prettiest. The Yen ETF (FXY) and the Swiss Franc Trust (FXF) are the real safe-haven stars. A rising flag/wedge has taken shape the last few days in UUP. This is tricky. While the wedge/flag is a bearish corrective pattern, further weakness in stocks and strength in bonds would likely push UUP higher. At what point does this four-day uptrend become a bigger uptrend? I would say a break above 21.25 would argue for a trend reversal in the UUP. Last week's highs and the July trendline mark resistance here. 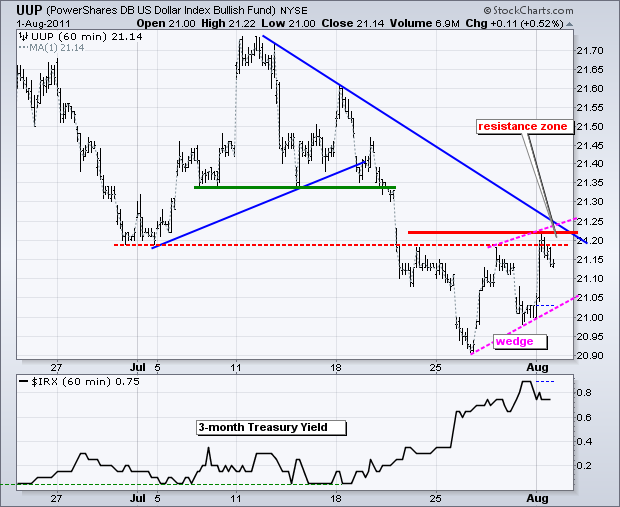 The 12-Month US Oil Fund (USL) is going the way of the stock market and is influenced by the Dollar. USL surged on the open, but fell back as selling pressure took over in stocks. USL broke support at 43.25 and I will now mark key resistance at 44.75. Bonds are also watching oil. Weakness in commodities lessens inflationary pressures and is bullish for bonds. 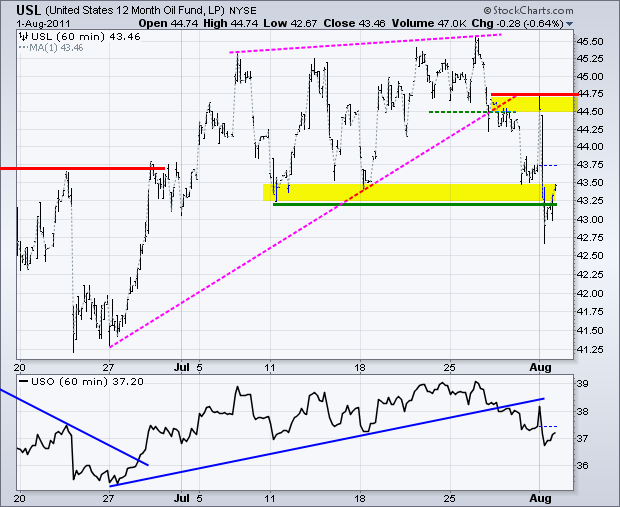 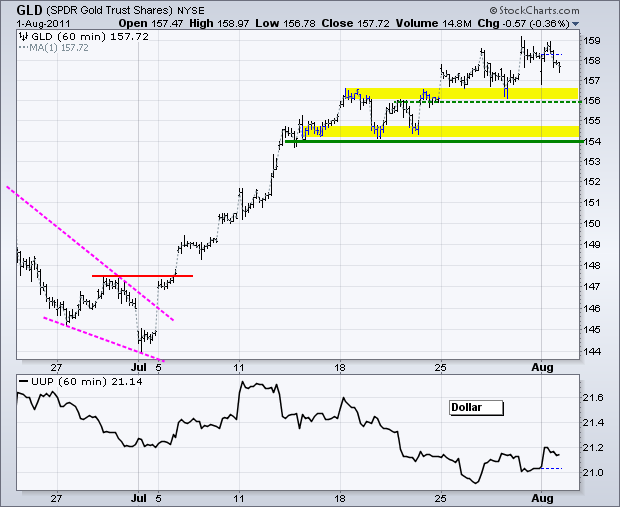