Stocks got an oversold bounce with small-caps, materials and energy leading the way on Friday. Despite this bounce, these three are lagging the broader market overall, which means this is a case of the worst hit groups getting the best bounce. Relative weakness in small-caps and the deterioration in breadth remains a concern for the stock market. Even though the trends since 19-Dec remain up, relative weakness in small-caps could be a leading indication that we are on the cusp of corrective period. Corrections can evolve as pullbacks that retrace a portion of the prior advance, sideways consolidations or a combination of the two. On the 60-minute chart, the S&P 500 ETF (SPY) peaked above 141 on Monday and then worked its way lower the rest of the week. A falling flag of sorts could be forming with broken support turning first resistance at 140. A move above this level would break falling flag resistance and signal a continuation higher. Barring such a breakout, broken resistance and the 50-61.80% retracements mark the next support zone for this correction. 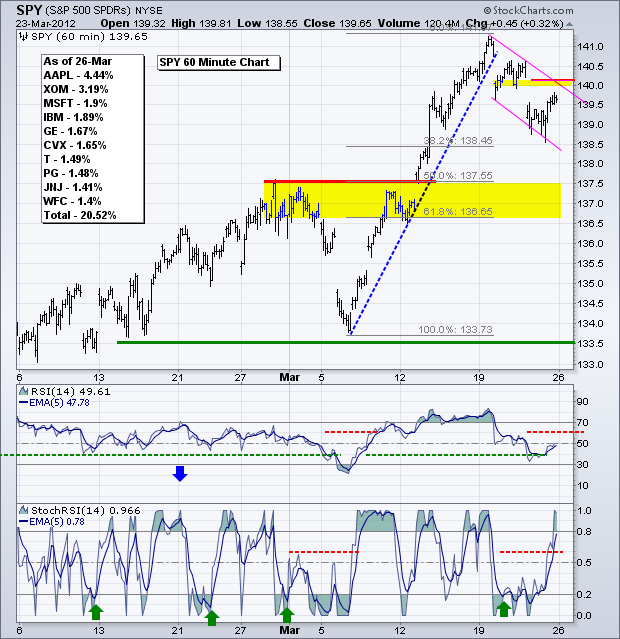 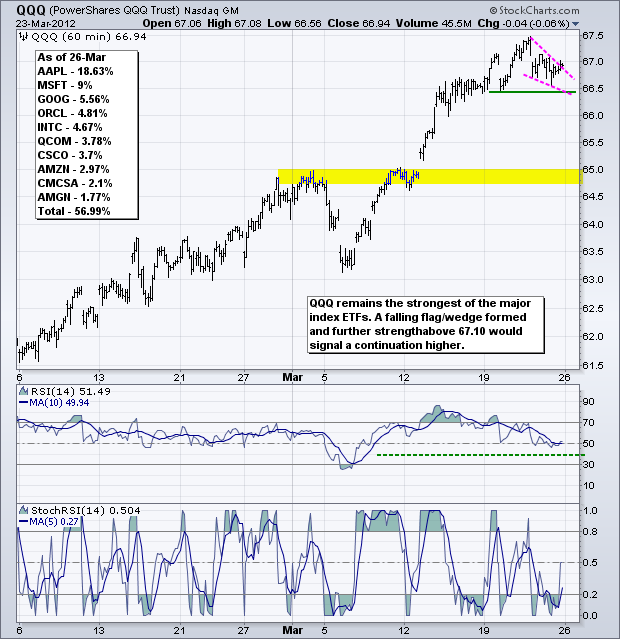 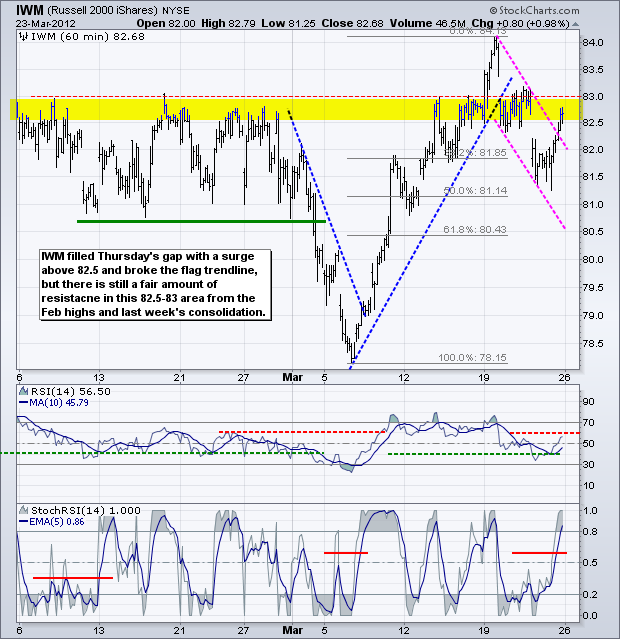 Treasuries remain stubbornly strong. Perhaps the slowdown in China and overbought conditions in US stocks are putting a bid into treasuries. The 20+ Year T-Bond ETF (TLT) broke resistance at 112, consolidated with a small flat flag and continued higher. Broken resistance and the Fibonacci clusters mark the next resistance zone in the 114.5-115 area. The flag lows mark support at 111.90. 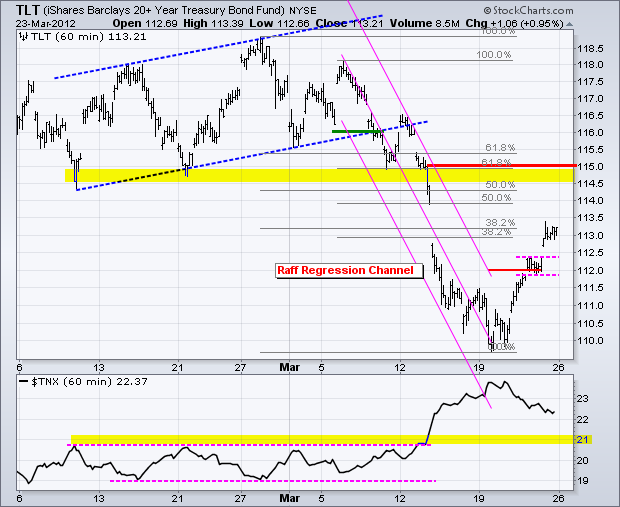 The US Dollar Fund (UUP) broke rising flag support and declined to the 61.80% retracement line on Friday. The trend since mid March is down and this flag break signals a continuation lower. I am marking resistance at 22.15. A move above this level would break the mid March trendline and negate the flag break. RSI resistance remains at 60 and a break above this level would confirm a bullish breakout in UUP. 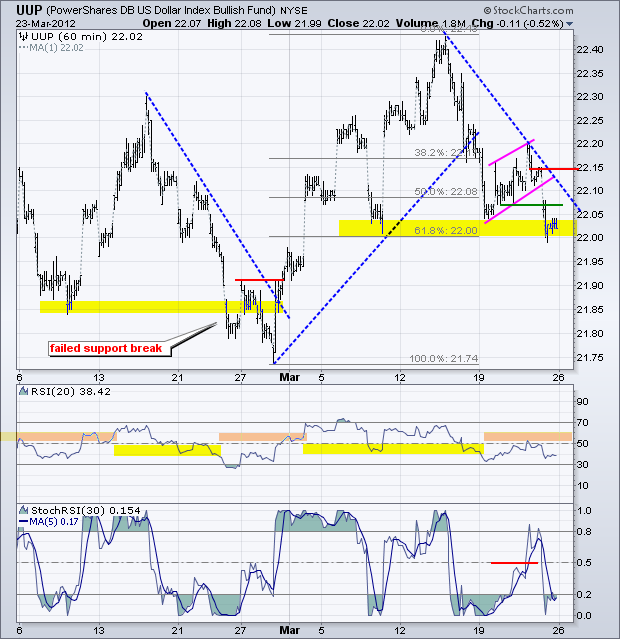 After a big surge in February, the US Oil Fund (USO) corrected with a slight downtrend the last four weeks. On the daily chart, this pattern looks like a falling flag, which is a bullish correction. However, the correction does not end until there is a decisive break above 41.50 in USO and 65 in RSI. Until such a break, further weakness or flat trading is expected. 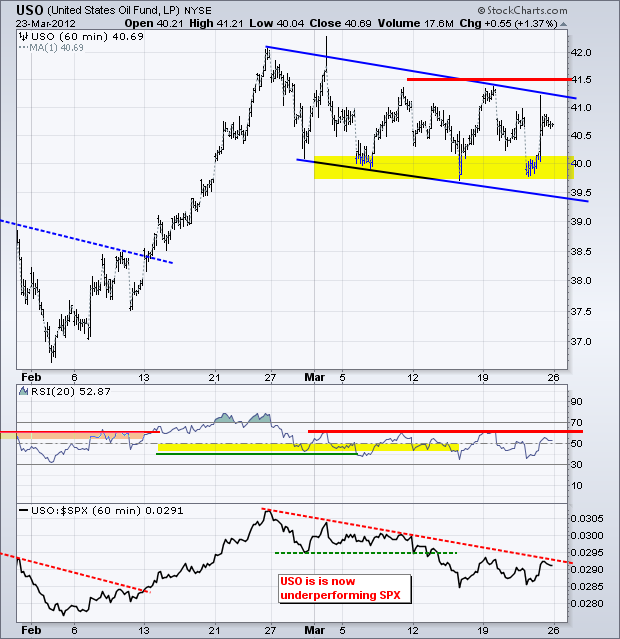 The Gold SPDR (GLD) continues to zigzag lower with a series of lower lows and lower highs this month. After a move to 158 last week, the ETF rebounded with a strong move to resistance on Friday. Broken support and last Monday's peak mark resistance here. Follow through and a breakout would be bullish for bullion. The Silver Trust (SLV) is shown in the indicator window with a falling wedge and resistance at 43. 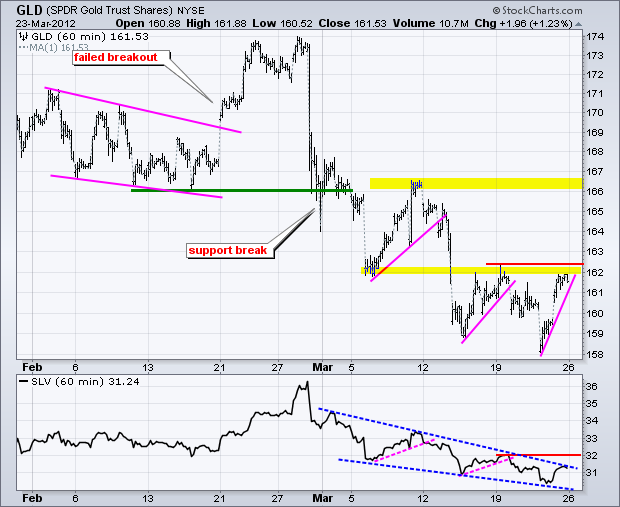