Is the second shoe about to drop? Stocks fell sharply on the open Tuesday and then consolidated since this open. Short-term, and I do mean very short-term, the S&P 500 ETF (SPY) held the gap down and formed a pennant consolidation on the 60-minute chart. A break below 140 would signal a continuation lower and open the door to a retracement of the nine day surge from 134 to 141. A 50% retracement of this move would carry back to the 137.5 area, which also marks support from broken resistance. In the indicator window, RSI is stalling near 50 with a consolidation of its own. StochRSI moved to zero a couple times and has yet to recover. Look for StochRSI to surge above .60 to get a bounce started or signal improving upside momentum. 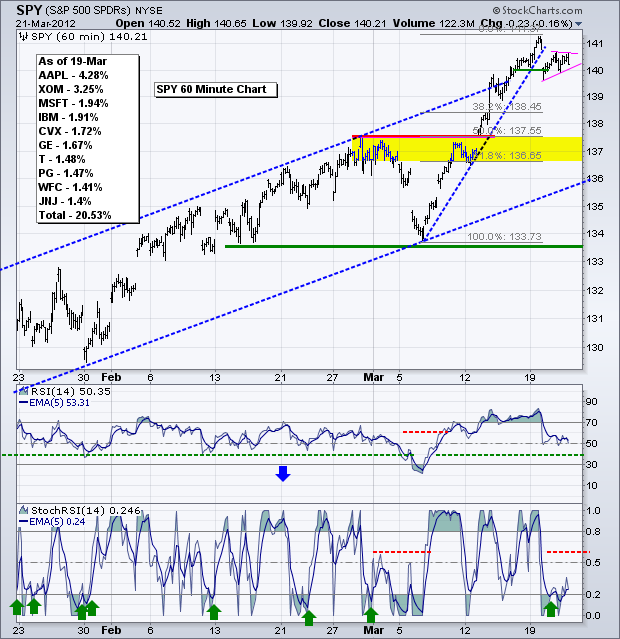 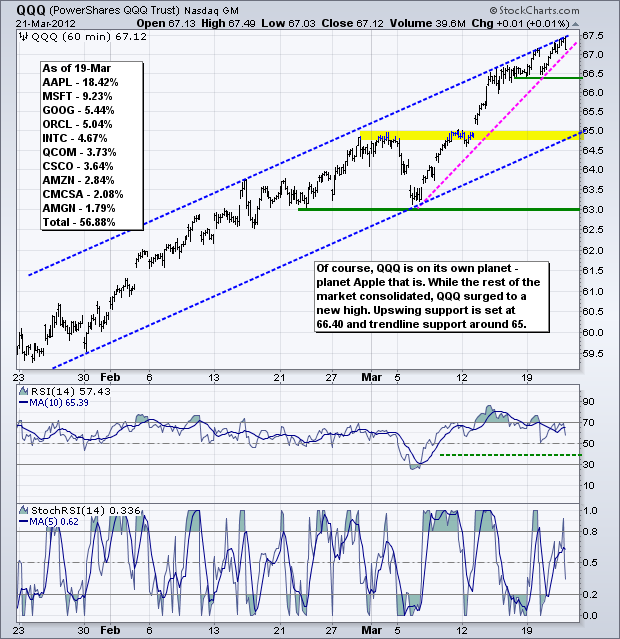 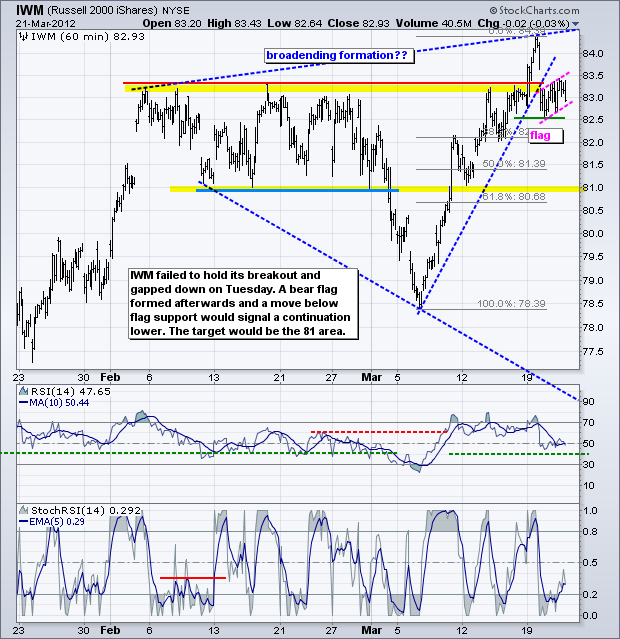 Softness in stocks and oversold conditions produced a decent bounce in treasuries. The 20+ Year T-Bond ETF (TLT) moved above Friday's high to challenge first resistance around 112. While a breakout would be positive, I still think this is just an oversold bounce within a bigger downtrend. Broken support turns next resistance in the 114.5-115 area. 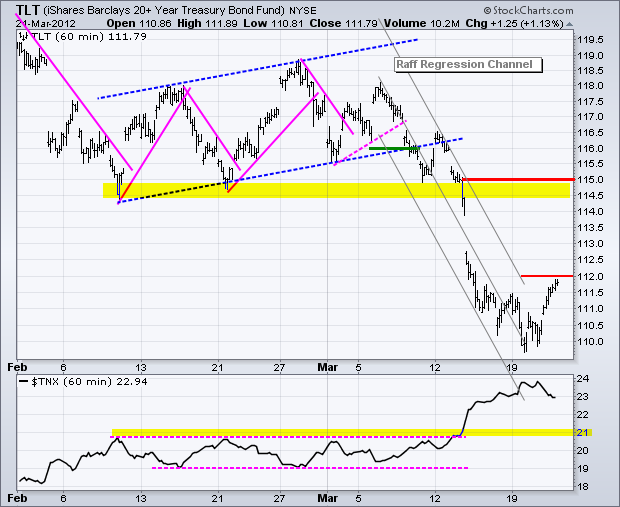 The US Dollar Fund (UUP) got a feeble bounce off the 61.80% retracement line and this bounce looks like a rising wedge (pennant). A move below Wednesday's low would signal a continuation lower. For now, the wedge is rising and the 2-3 day trend is up. It will continue until proven otherwise with a pennant break. StochRSI bounced from oversold levels and further strength above .50 would be bullish for short-term momentum. 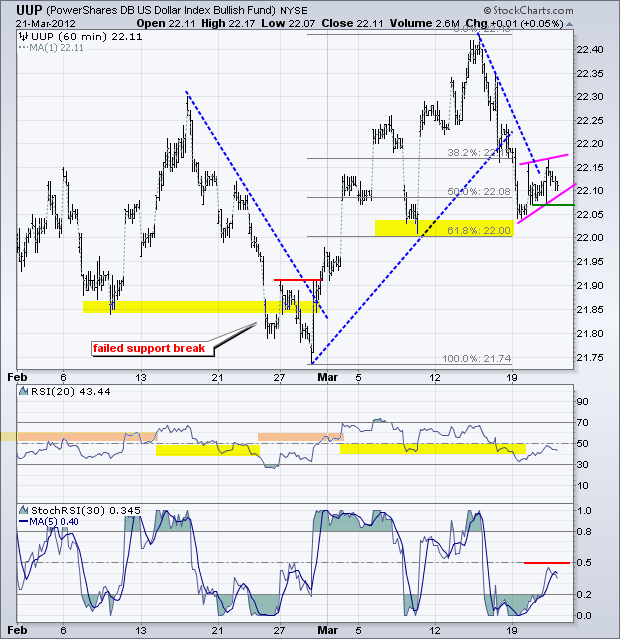 These little rising wedge/pennant formations are everywhere. The US Oil Fund (USO) failed to hold its falling wedge breakout and plunged below 41 on Tuesday. An oversold bounce then produced a small rising wedge (pennant) and a break below this pattern would signal a continuation lower. Overall, the three week trend for oil is down with USO resistance set at 41.50 and RSI resistance at 65. 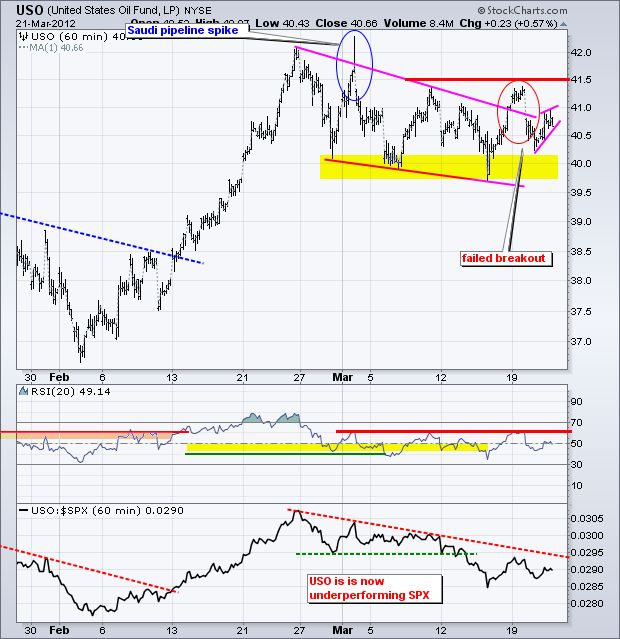 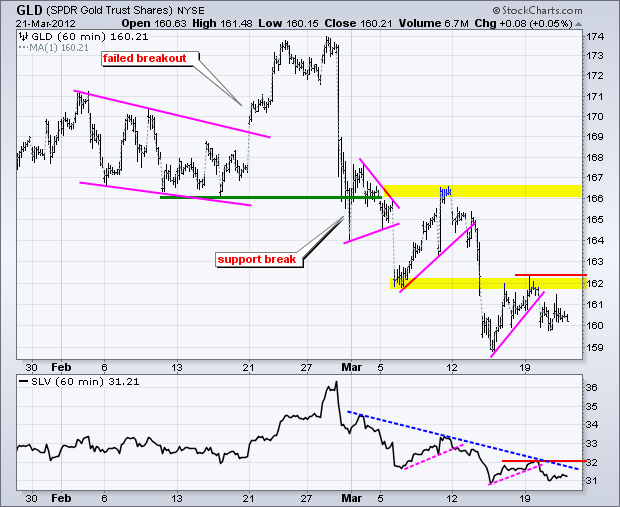