After a sharp setback on Tuesday, stocks moved from oversold to overbought in three days. The Russell 2000 ETF (IWM) surged from 78.5 to 81.5 (3.8%), the S&P 500 ETF (SPY) moved back to resistance at 138 and the Nasdaq 100 ETF (QQQ) is challenging its early March high around 65. Overall, stocks remain ripe for a correction period that could last a few weeks. Such corrections can evolve as pullbacks, trading ranges for a combination of both (slow choppy pullback). New short positions are unpalatable because the market is simply too strong and in an uptrend. New long positions are also unappetizing because stocks are short-term overbought and SPY/QQQ are at resistance. There are some big swings developing over the last two weeks, but traders would have to use 10-minute charts and some nimble moves to catch these. On the SPY chart, the current swing is up with the ETF near the late February and early March highs around 138. While a breakout would be technically bullish, I would be careful here because we could be entering into some sort of high-level trading range. Also keep in mind that it is a busy week on the economic reporting front. Retail Sales is Tuesday, the Fed makes its policy statement Tuesday afternoon, the Philly Fed releases its survey on Thursday and Industrial Production closes out the week on Friday. 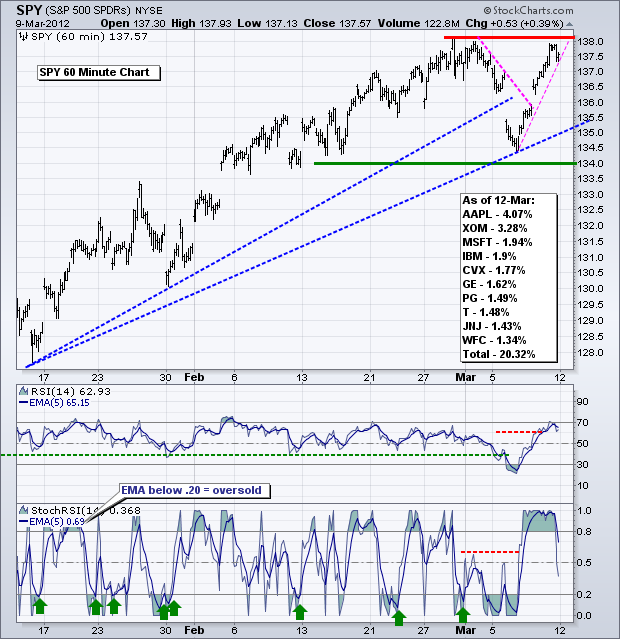 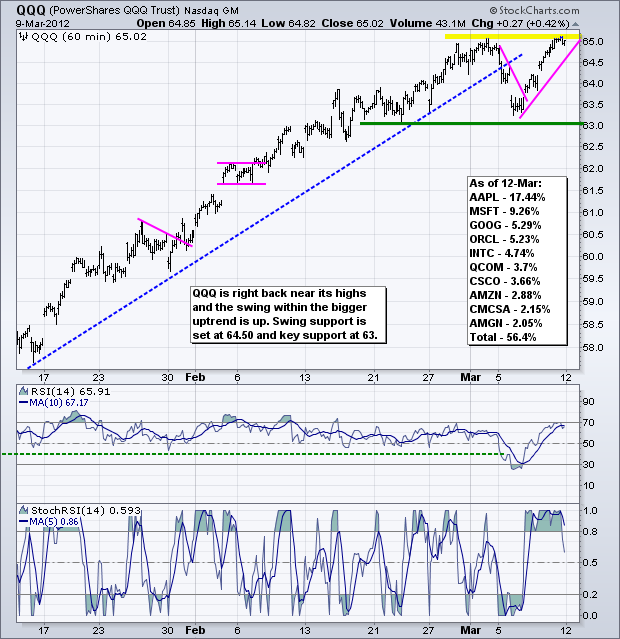 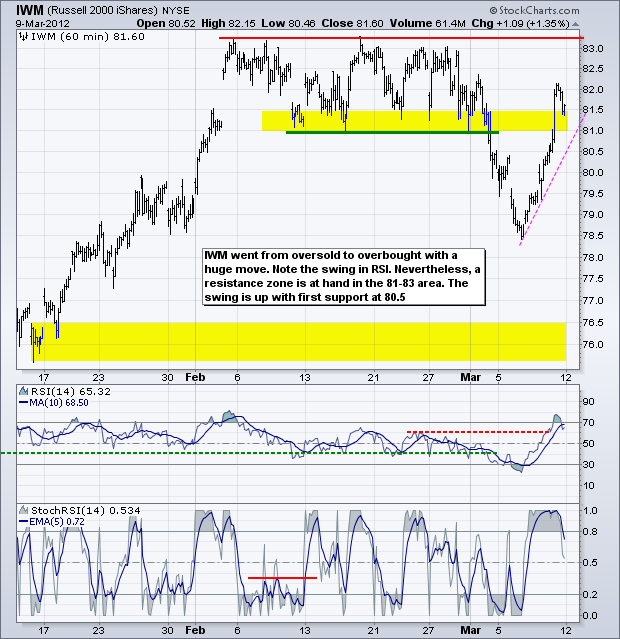 It is another big week for treasuries. Continued strength in stocks, renewed confidence in the European debt situation and an improving employment picture weighed on treasuries last week. Treasuries will have plenty to focus on this week with Retail Sales, the Fed meeting, PPI and CPI. A strong Retail Sales report and absence of QE3 rhetoric in the Fed statement would weigh on treasuries. On the price chart, the 20+ Year T-Bond ETF (TLT) is trading near support from the lows extending back to early February. The 10-year Treasury Yield ($TNX) is near its highs extending back to early February as well. Trading has been extremely choppy lately and the current swing is down. I am marking resistance at 116.50 for now. A move back above this level would negate last week's support break and reverse the three day downswing. 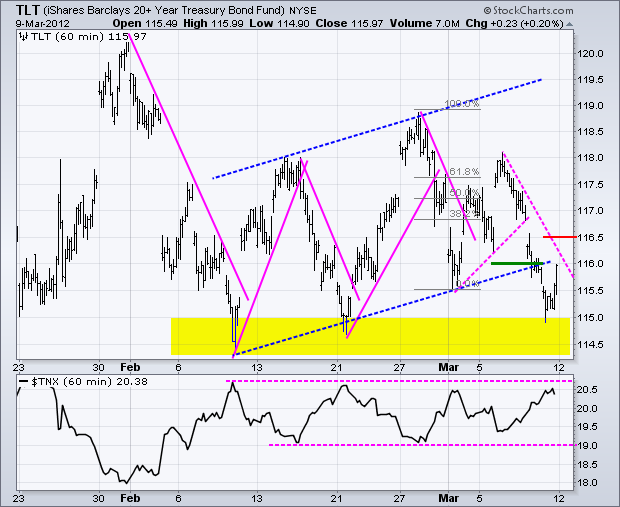 The Dollar, stocks and oil were all up on Friday. All three are also up over the past month (since 10-Feb). It has been a long time since the Dollar and stock market were positively correlated. I think the LTRO is negatively affecting the Euro. This is the European Central Bank's version of quantitative easing that is designed to boost bank liquidity. It now looks like the ECB is more dovish than the Fed, which is Euro bearish and Dollar bullish. On the price chart, the US Dollar Fund (UUP) reversed near the 50% retracement line and surged back to resistance. With this move, I am now marking key support at 22 and will expect higher prices as long as this level holds. RSI held support in the 40-50 zone and momentum remains bullish. 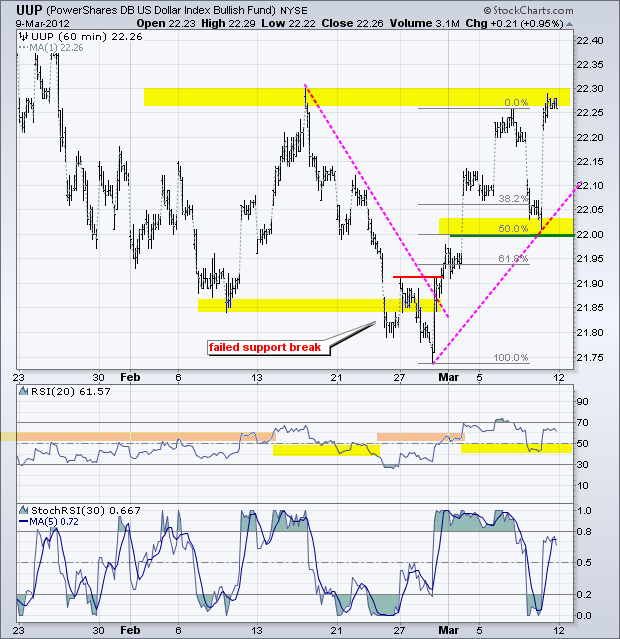 The US Oil Fund (USO) edged above resistance at 41, even though the Dollar surged. The trendline break and move above 41 are bullish until proven otherwise. The early February trendline marks support at 40.30. A move below this level would clearly negate the wedge breakout and put oil back on the defensive. 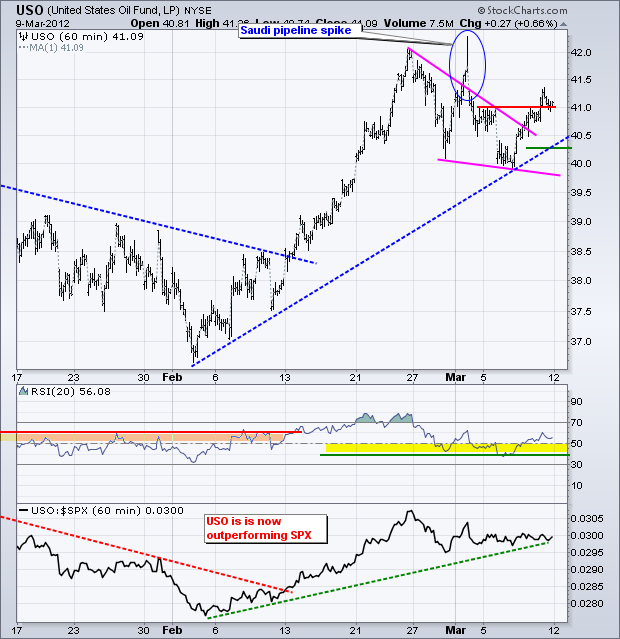 The Gold SPDR (GLD) moved lower on the open, but quickly recovered with a rebound back into the resistance zone. At this point, I think the big support break dominates the chart. Broken support in the 166-168 area now turns into resistance and the bulls need to retake this level. The bears have the upper hand until there is a break above 168. 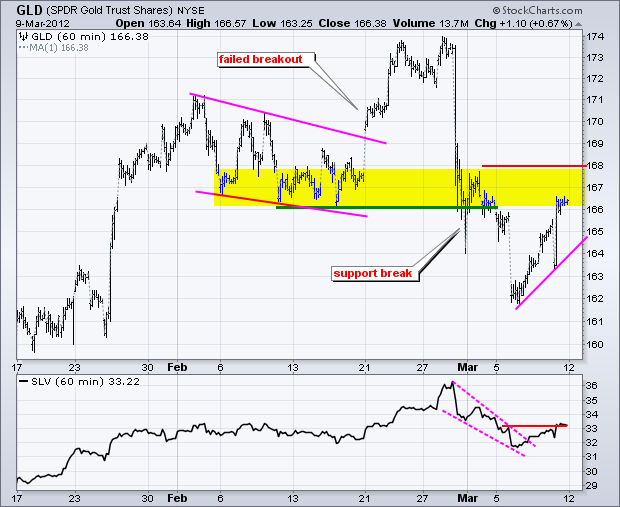