Stocks are about as overbought as they have been in a long time. Even so, there are simply no signs of significant or sustained selling pressure. Declines, such as those seen in late January or early March, have been short affairs lasting just a few days. The subsequent rallies proved stronger and carried stocks to new highs. With the most recent surge, the S&P 500 ETF (SPY) moved from ±134 to ±140 in eight days (+4.4%). We do not need a momentum oscillator to know that this has created a short-term overbought situation. Also note that SPY is up some 21% since its late November low and up some 30% since its early October low. Big moves indeed. Short-term, the swing is up on the 60-minute chart with first support marked at 138.8. A move below this level would break the steep eight day trendline and first support. While negative, I would only look for a throwback to the 137 area, which is broken resistance. The 137 area also marks a 50% retracement of the eight day advance. 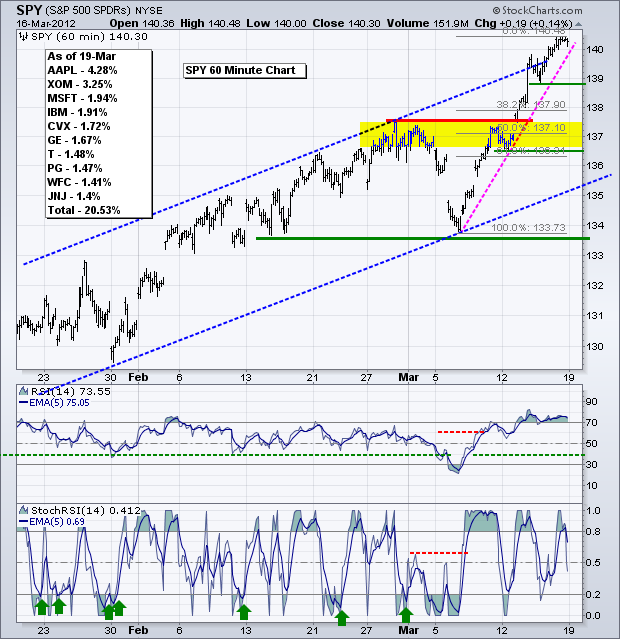 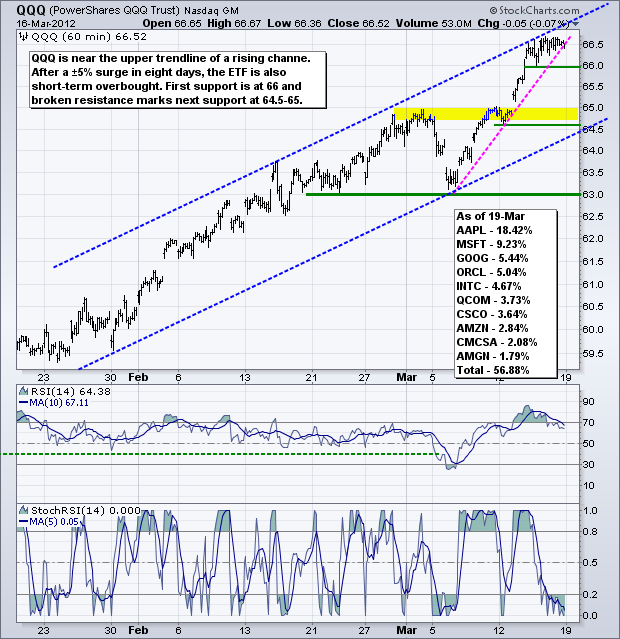 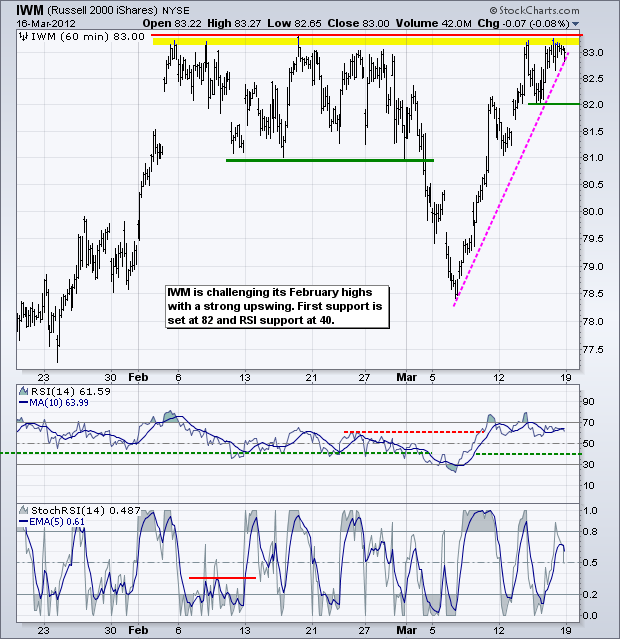 The 20+ Year T-Bond ETF (TLT) is as oversold as the stock market is overbought. With the breakdown over the last eight days, the ETF is clearly in a medium-term downtrend and lower prices are expected. Oversold conditions argue for a bounce, but I am not sure how far it will extend because the medium-term downtrend could pull trump at anytime. Broken support turns resistance in the 114.5-115 area. 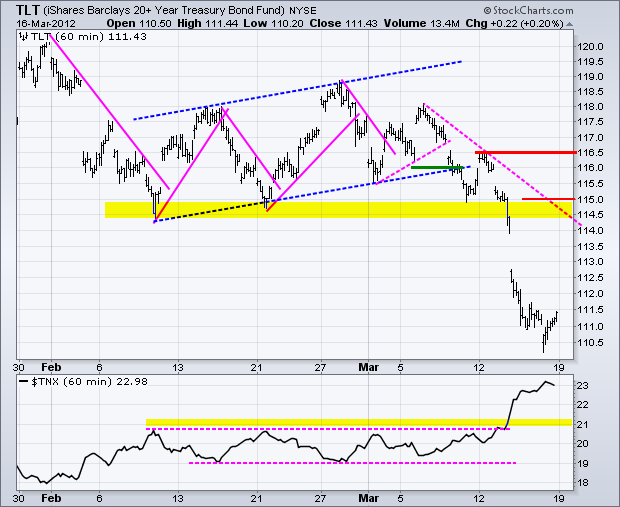 The US Dollar Fund (UUP) took a big hit the last two days and broke below first support. While negative, I think the bigger trend is up and this minor pullback will reverse sooner rather than later. Notice that RSI moved to its support zone (40-50), which is the first place to look for a bounce. I am marking minor resistance at 22.28 and a move above this level would be the first sign of an upturn. Key support remains at 22. 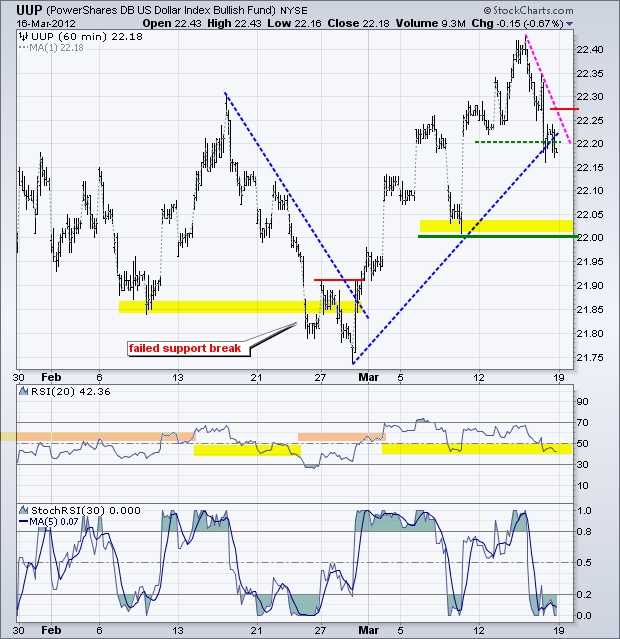 Oil got a boost from a falling Dollar on Friday and the US Oil Fund (USO) is challenging resistance in the 41 area. This is a make-or-break area for crude. The decline over the last few weeks formed a long falling wedge. After the sharp advance in February, this looks like a bullish continuation pattern. However, a breakout is needed to fully reverse this 3-4 week decline and signal a continuation higher. Chartists should keep an eye on stocks and the Dollar. Softness in an overbought stock market and an upturn in the Dollar could prevent a breakout here. 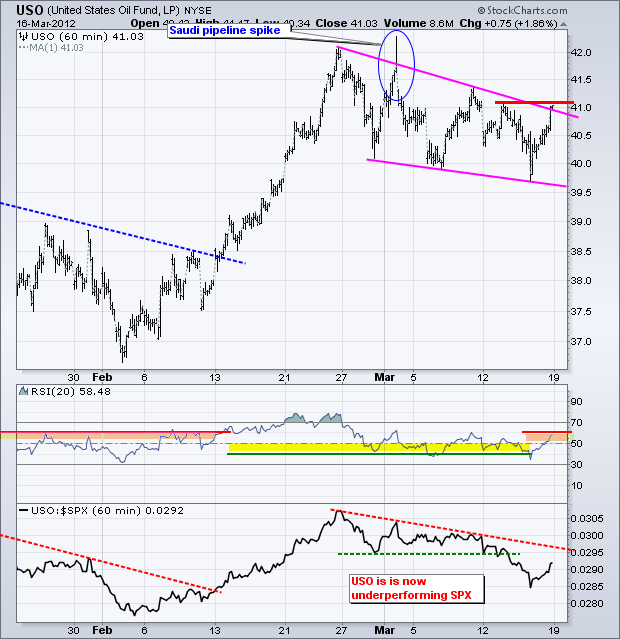 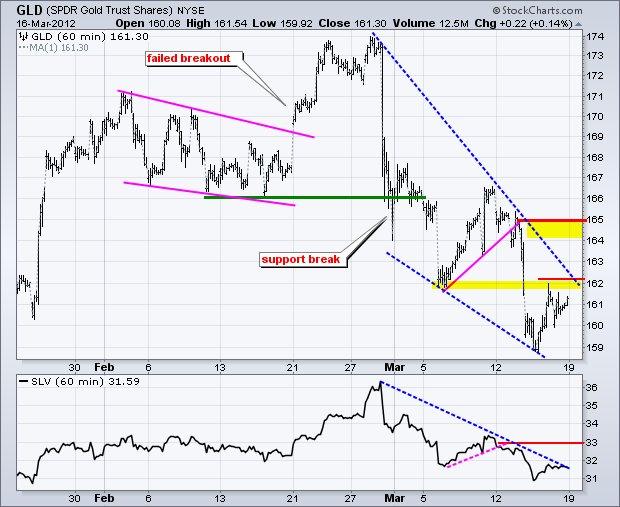