Click here to see the live version Click here to see the live version
×
Stocks got smacked hard on Tuesday with the Nasdaq 100 ETF (QQQ) again leading the way down. The Russell 2000 ETF (IWM) was also relatively weak with a 1.17% decline on the day. Eight of the nine sectors were lower with the Consumer Discretionary SPDR (XLY) falling the most. Relative weakness in this most economically sensitive sector is not a good sign for the economy or the broader market. The Energy SPDR (XLE) was the only gainer, but this sector will likely come under pressure on Wednesday because Chevron (CVX) warned on third quarter earnings. The chart below shows XLE with a September decline and an October pennant. A break below pennant support targets further weakness towards the 69.50 area. 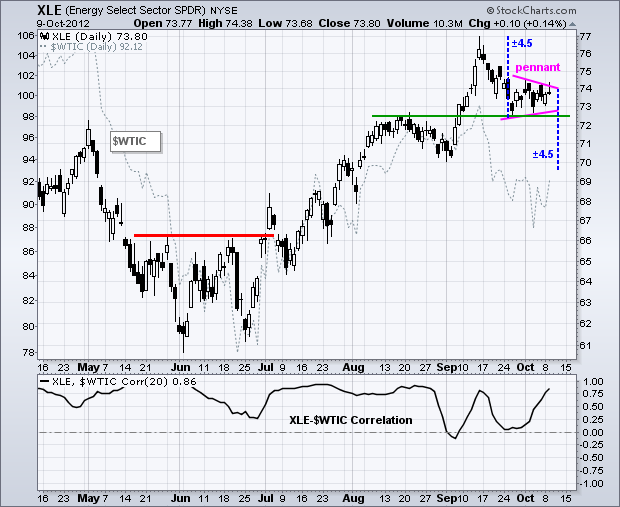 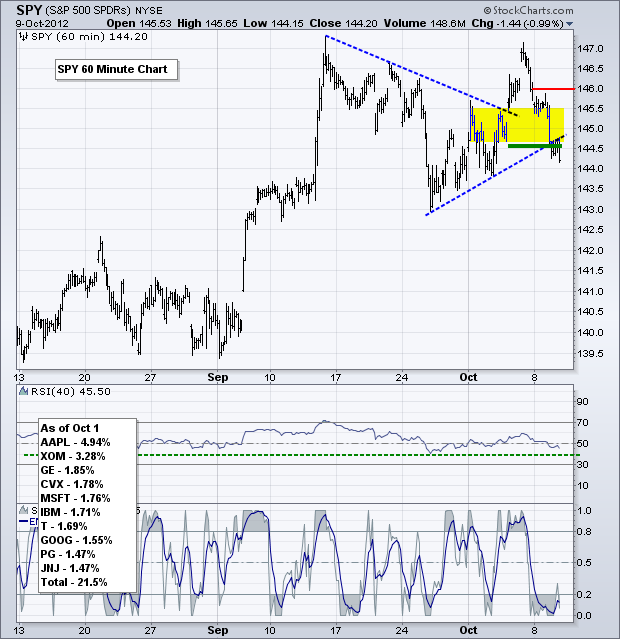 On the 60-minute chart, SPY hit resistance at the mid September high and broke support with a sharp decline the last three days. Also notice that Friday's gap failed to hold and yesterday's decline filled Thursday's gap. The last two gaps failed to hold. The ETF broke support from the late September trend line, but RSI has yet to confirm with a break below 40. Even though RSI did not confirm, I think the short-term trend is down and will mark resistance at 146. Note that IWM and QQQ clearly broke down 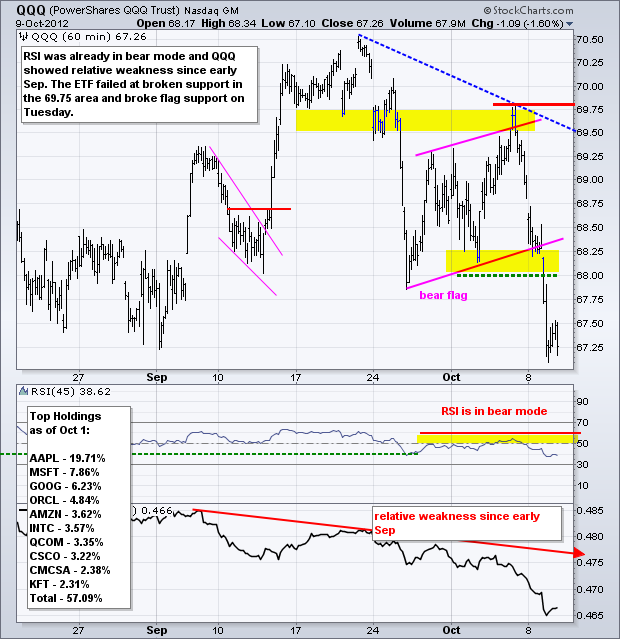 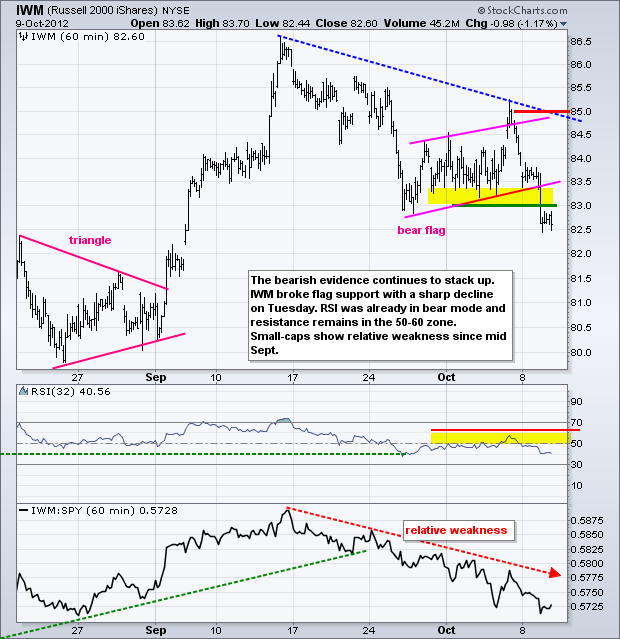 After plunging last week, the 20+ Year T-Bond ETF (TLT) firmed over the last two days. Short-term traders can watch this week's range for the next directional signal. Weakness in stocks is positive for treasuries and the risk-off trade. TLT firmed in the 50-61.80% retracement zone and established first resistance with this week's highs. A break above these highs would be positive for treasuries and negative for stocks. Before getting too bearish, note that this could still be just a rest after last week's plunge. A break below this week's low would signal a continuation lower. 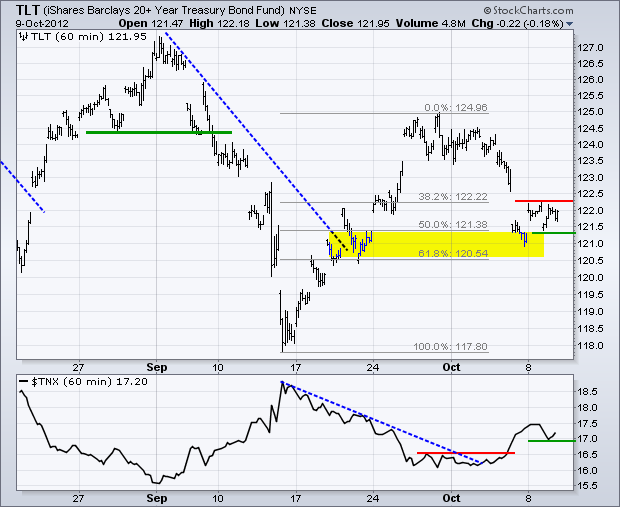 The risk-off trade was also buoyed by a surge in the Dollar. The US Dollar Fund (UUP) failed to hold the channel break and surged to resistance in the 21.95 area. The failed break is positive and a follow through breakout would be bullish for the Dollar. RSI is also challenging resistance at 60 and a breakout would turn momentum bullish. An uptrend in the Dollar would be bearish for stocks, and possibly gold. 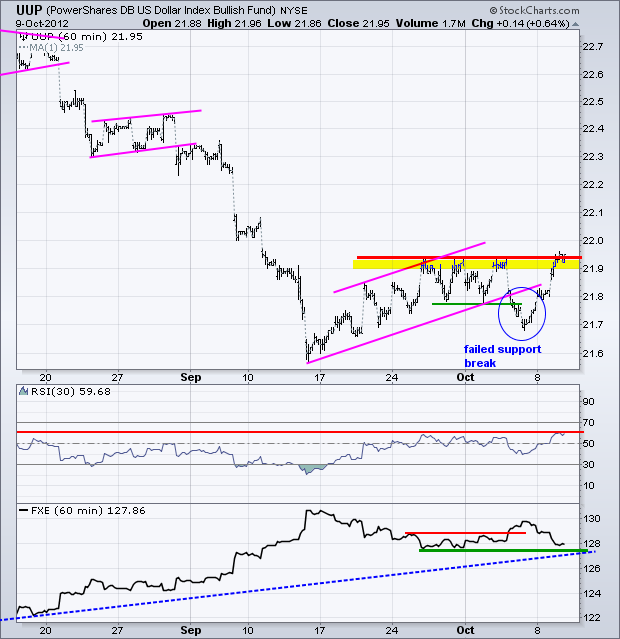 It is hard to ignore the day-to-day swings in oil, but I am not going to turn bullish on this trend line break just yet. The US Oil Fund (USO) surged above 34 and broke the falling wedge trend line. Even though this is positive, I think resistance in the 34.5-34.75 area holds the real key here. RSI is in its resistance zone and has yet to break above 60. Also note oil could be weighed down by weakness in stocks and strength in the Dollar. 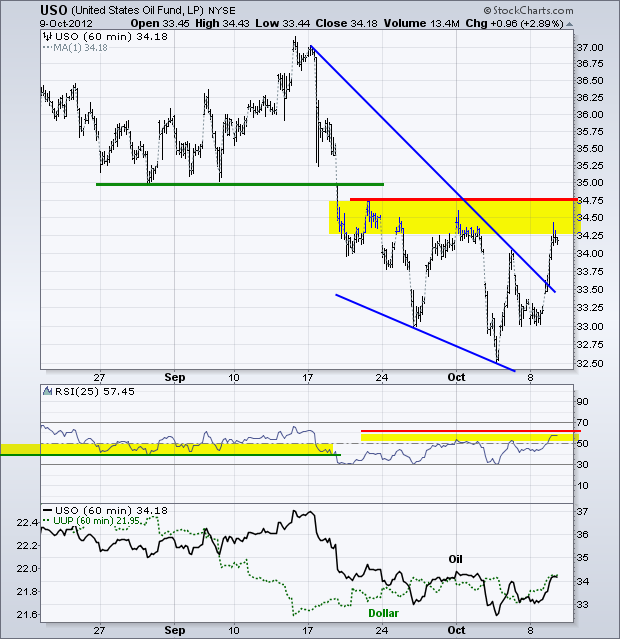 Weakness in stocks and strength in the Dollar did weigh on gold. The Gold SPDR (GLD) fell from 174 to 171 over the last three days. The overall trend remains up, but traders should watch the Dollar closely in the next few days. Even though GLD may have support in the 170 area, I am going to leave key support at 167-168 for now. The idea is to avoid whipsaws from the noise (volatility). A break below 167 would be deemed excessive and call for a trend reversal. 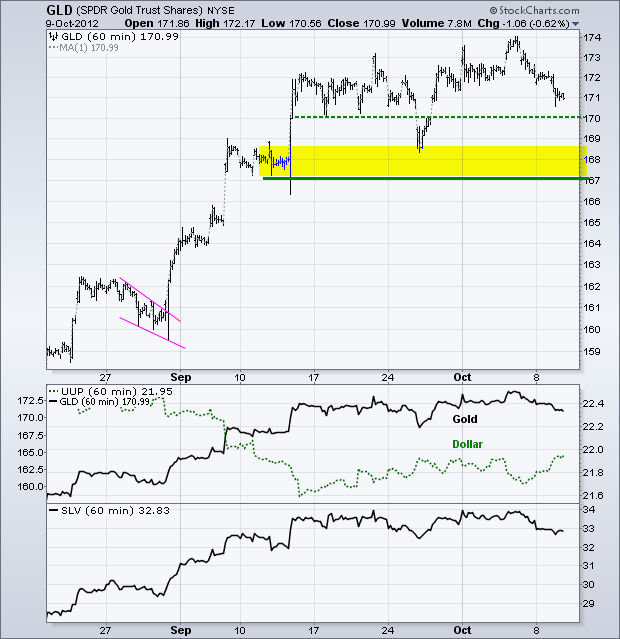