Click here to see the live version Click here to see the live version
×
Stocks edged lower with the Apple-laden Nasdaq 100 ETF (QQQ) leading the way (-.95%). The Russell 2000 ETF (IWM) was also relatively weak with a .63% decline on the day. Seven of the nine sectors were lower with the Technology SPDR (XLK) falling over 1%. The Energy SPDR (XLE) and the Utilities SPDR (XLU) were the lone gainers. Trading was fairly lackluster on Monday because of the bank holiday and bond market closure. Volume levels should return to normal as earnings season kicks off with Alcoa on Tuesday. Even though the Home Construction iShares (ITB) remains one of the strongest industry group ETFs, the ETF appears to be hitting resistance from the late September high. Notice that this high formed with a bearish engulfing pattern. 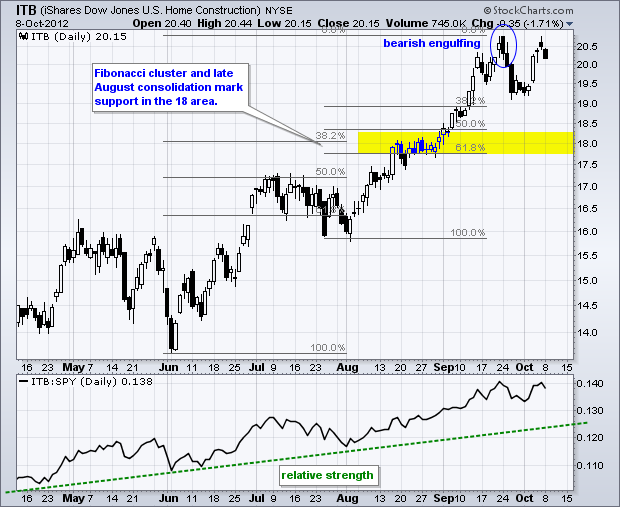 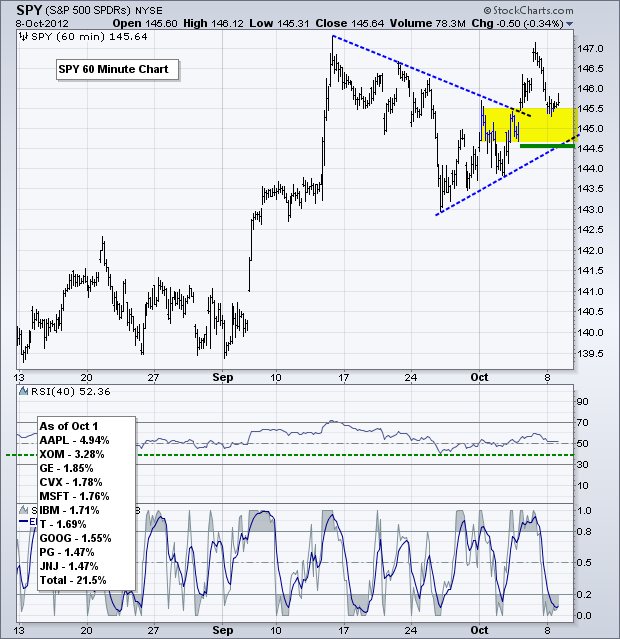 On the 60-minute chart, SPY broke resistance in the 145.5 area and this breakout is being tested. Broken resistance and the late September trend line combine to mark support at 144.50. A break below this level would mean the breakout failed and the short-term uptrend reversed. RSI remains in bull mode as it bounced off the 40-50 zone. This zone now marks momentum support and a break would be bearish. 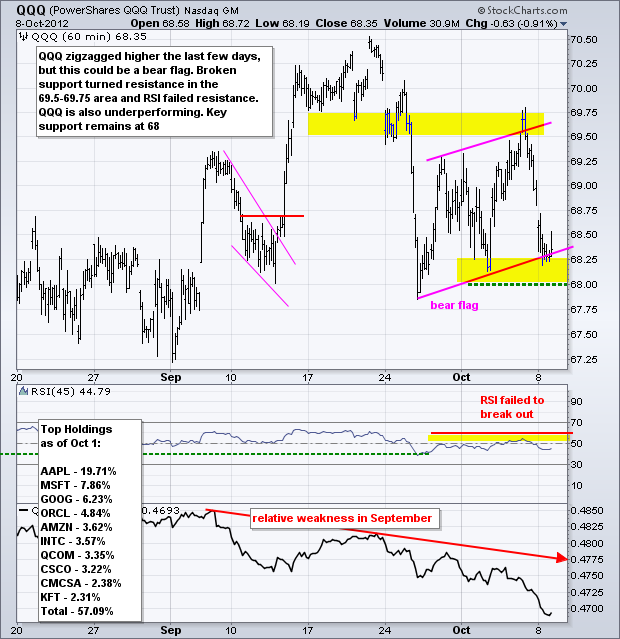 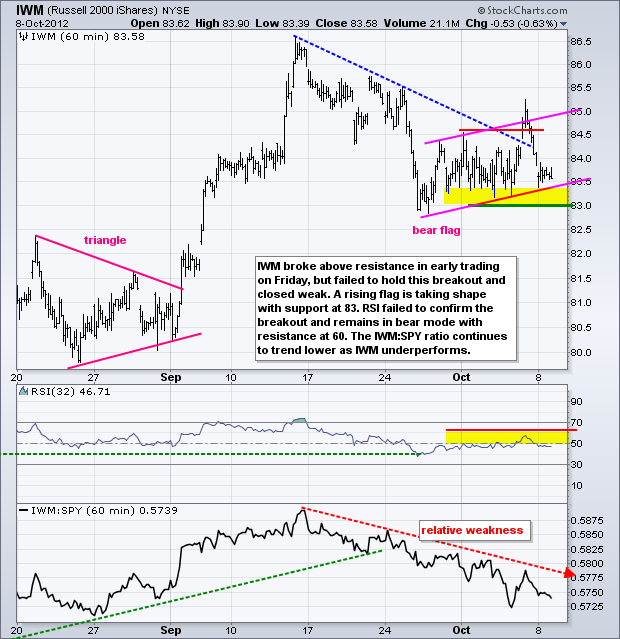 No change. The breakdown in the 20+ Year T-Bond ETF (TLT) is bullish for stocks, as is the upturn in the 10-year Treasury Yield ($TNX). TLT broke support at 123 and then fell sharply after the employment numbers on Friday. Despite this breakdown, the ETF is at a potential support zone. Notice that the decline retraced 50-61.80% of the prior advance and broken resistance (trend line) turns into potential support. 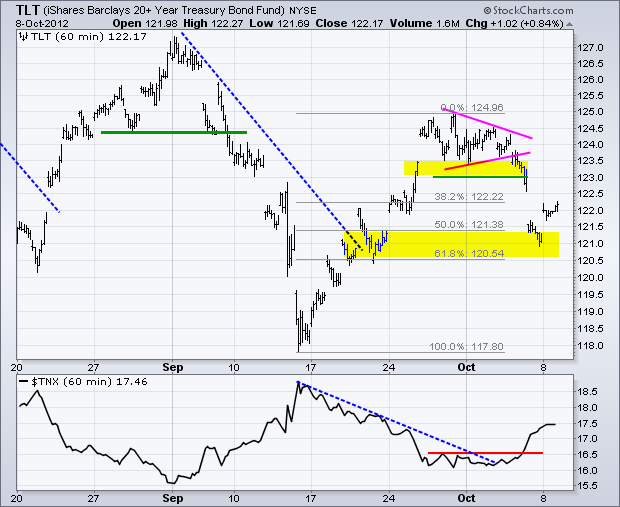 No change. The US Dollar Fund (UUP) broke down last week and this is also positive for stocks. This breakdown has to hold and the resistance lines are clear. UUP has resistance from the late September highs and RSI has resistance at 60. Breakouts in both would be bullish. Until then, the trend is down for the greenback and up for the Euro. 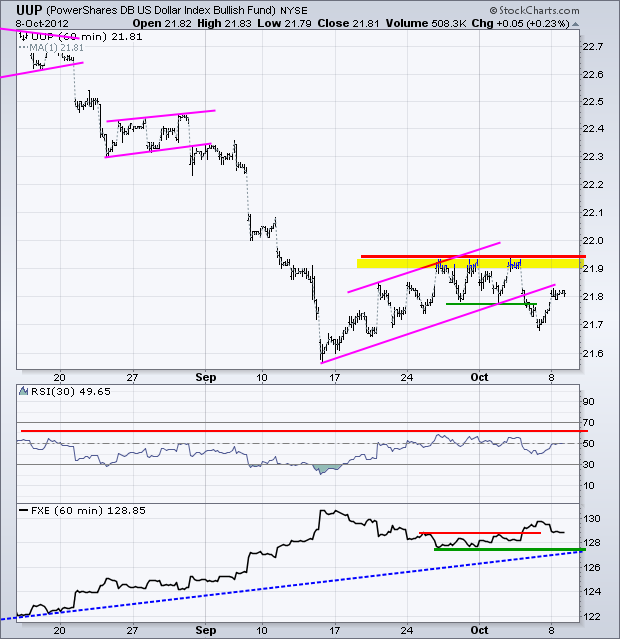 No change. Oil is all over the place, but the general trend is clearly down since mid September. USO broke support and broken support held. A falling wedge may be taking shape, but the trend is down as long as the wedge falls. I am leaving resistance at 34.75 and a break above this level is needed for a definitive trend change. RSI remains in bear mode with resistance at 60. 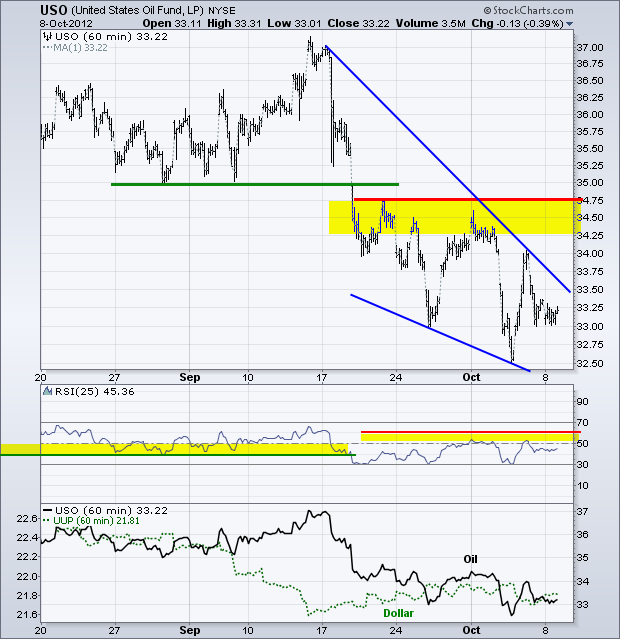 No change. There is not much change in gold, which remains negatively correlated to the Dollar and positively correlated to stocks. The Gold SPDR (GLD) edged above 172 in mid September and closed just above 172 on Friday. GLD has not moved much in the last three weeks. The trend is up and this is still viewed as a consolidation within an uptrend. First support is set at 171, but I will focus my attention on key support at 167. 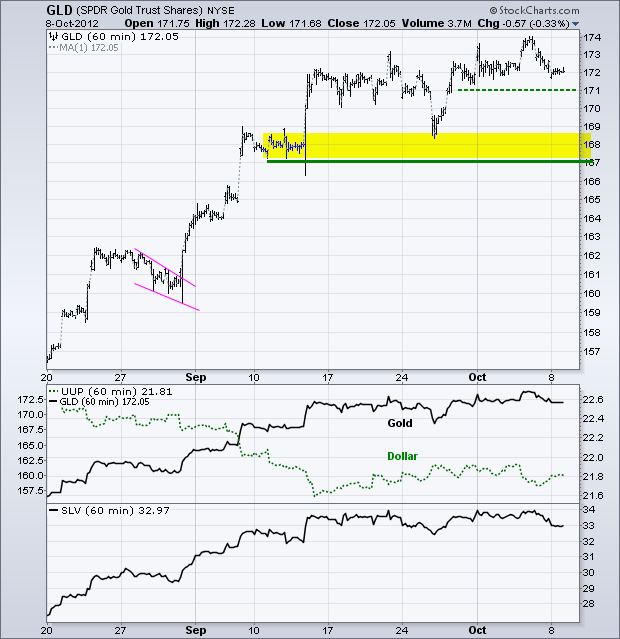