Click here to see the live version Click here to see the live version
×
The markets moved to risk-on mode on Thursday as stocks edged higher, treasuries fell, oil surged around 5%, the Dollar fell and the Euro rose. And now for the employment report. The major index ETFs moved modestly higher with the S&P MidCap 400 SPDR (MDY) leading the way (+1.46%). These mid-caps are all over the board, but it is good to see upside leadership here. However, the Russell 2000 ETF (IWM) failed to confirm the breakout. The chart below shows MDY breaking above consolidation resistance with a surge above 181 on Thursday. This breakout is bullish as long as it holds. A move back below 179.50 would negate the breakout. Relative weakness remains a concern though. Notice that the price relative (MDY:SPY ratio) remains in a downtrend since mid September. 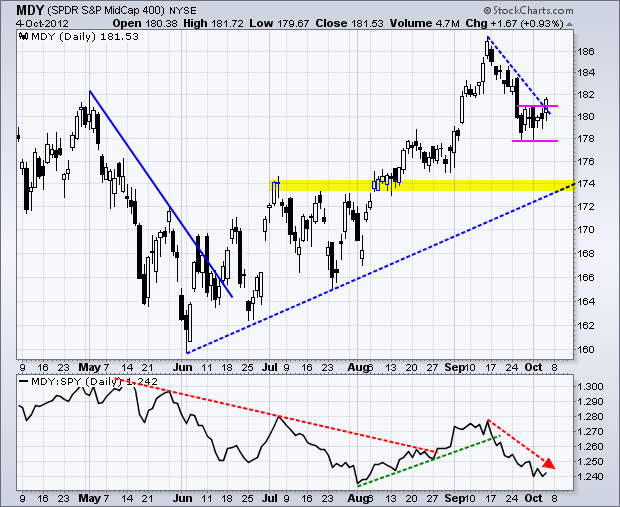 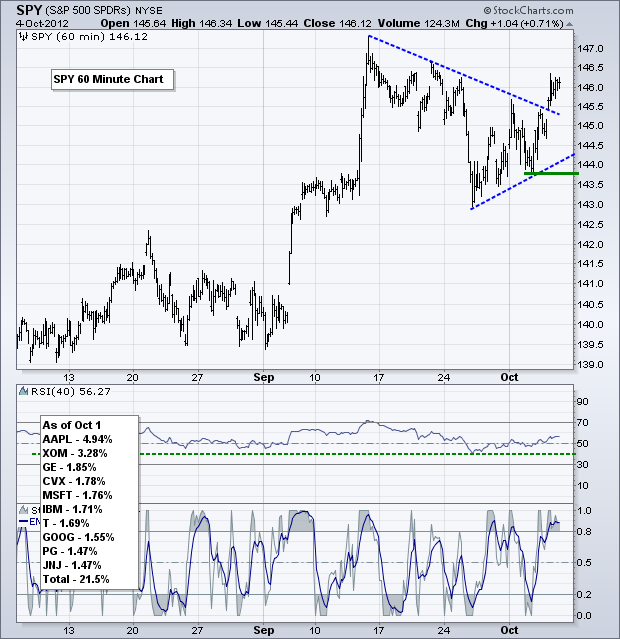 On the 60-minute chart, SPY broke above resistance to reverse the short-term downtrend. The advance started out as a rising flag, which is potentially bearish, but the surge above 145.5 negates this pattern. Keep in mind that the rising flag represents a small uptrend because it is rising. It takes a support break to reverse the small uptrend and confirm the bearish nature of the pattern. As witness with yesterday's surge, not all rising flags are confirmed with a support break. With the surge above last Monday's high, I will set key support at 143.7 and leave RSI support at 40. 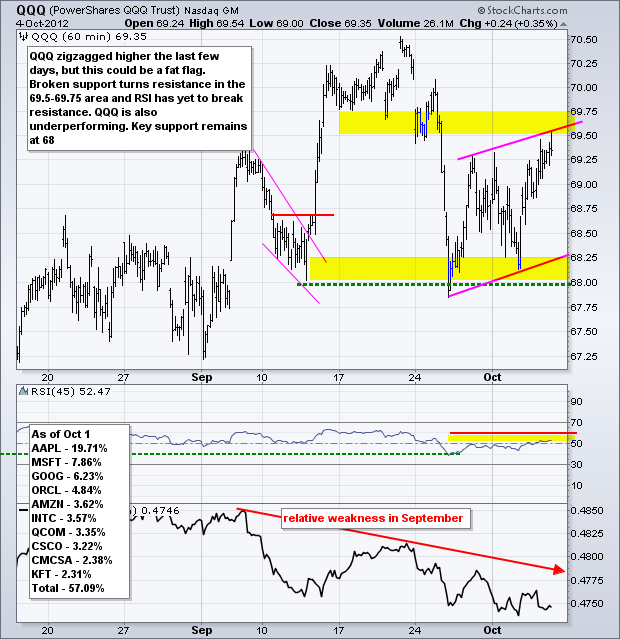 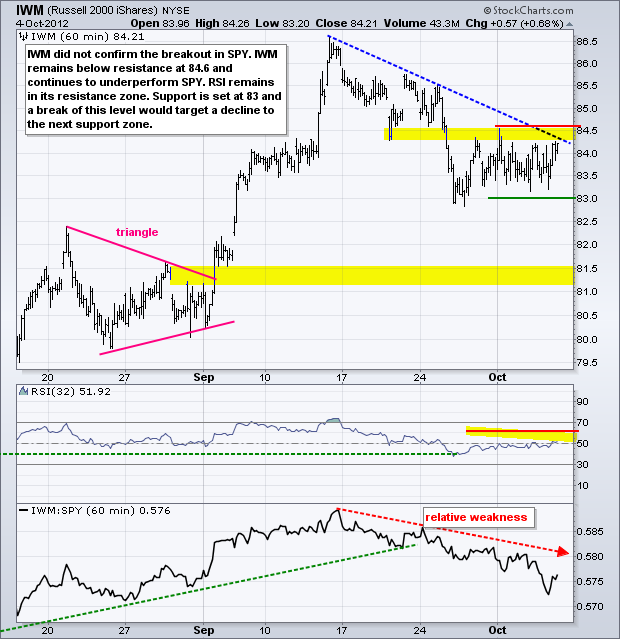 The 20+ Year T-Bond ETF (TLT) surged in late September, consolidated and then broke support with a decline below 123. This support break reverses the short-term uptrend. Also notice that the 10-year Treasury Yield ($TNX) broke above its late September high. Stocks and yields are positively correlated, while stocks and treasuries are negatively correlated. Now let's see if this break will hold as we head into the employment report. A surge back above 123.5 would suggest a bear trap and failed support break. 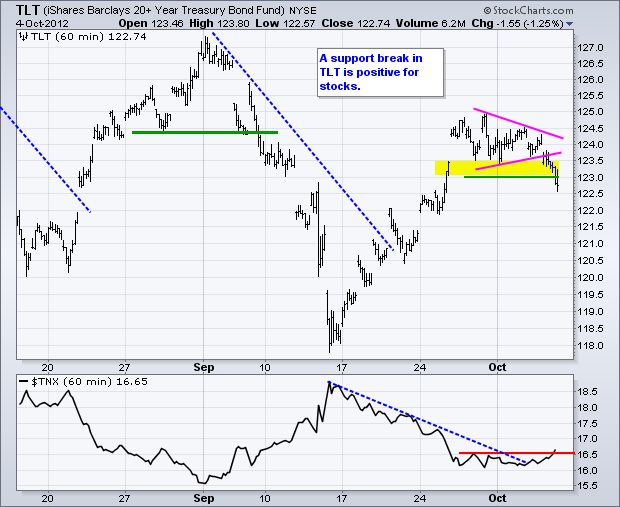 The Euro bulls liked what super Mario (Draghi) had to say at the European Central Bank (ECB) press conference on Thursday. The US Dollar Fund (UUP), which moves opposite the Euro, broke channel support to signal a continuation of the bigger downtrend. This breakdown is positive for stocks and the Euro, provided it holds. Key resistance is set at 21.95 and RSI resistance is set at 60. Breakouts would reverse the downtrend in the Dollar. 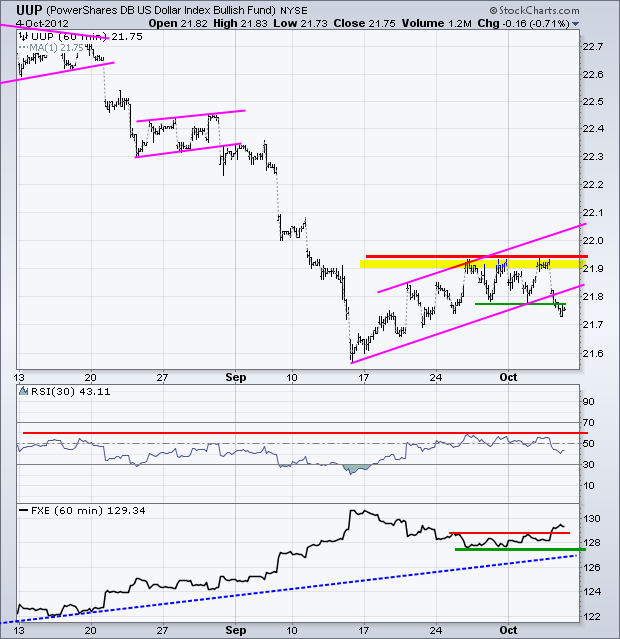 After plunging 4% on Wednesday, the US Oil Fund (USO) surged 4% on Thursday. Oil was oversold after Wednesday's plunge, but the size of the recovery suggests something bigger at work. Oil is part of the risk-on trade. Oil also benefits from weakness in the Dollar. Perhaps the breakdown in the Dollar and surge in mid-caps pushed money into crude. On the price chart, USO remains in a downtrend with broken support turning resistance. Look for a follow through break above 34.75 and an RSI break above 60 to fully reverse the downtrend. 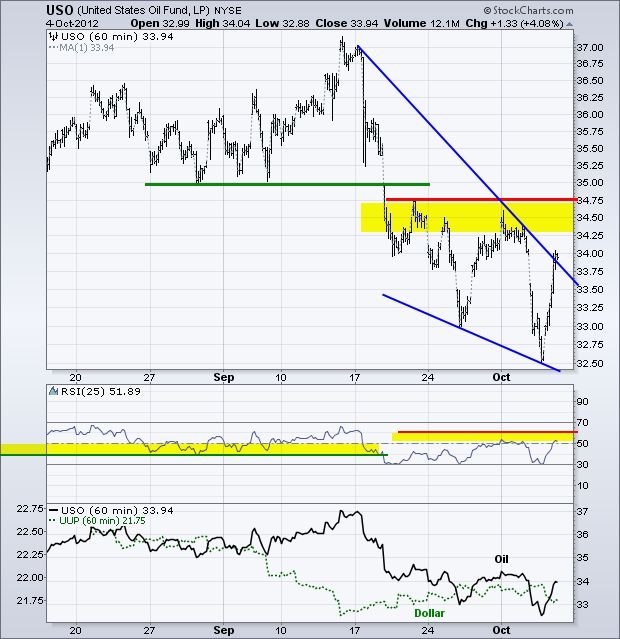 The channel break in UUP pushed money into gold as the Gold SPDR (GLD) broke above 173 and held above 173 on Thursday. This simply extends the uptrend and does little to change the overall chart picture. I can mark first support at 171, but key support remains in the 167-167 area. 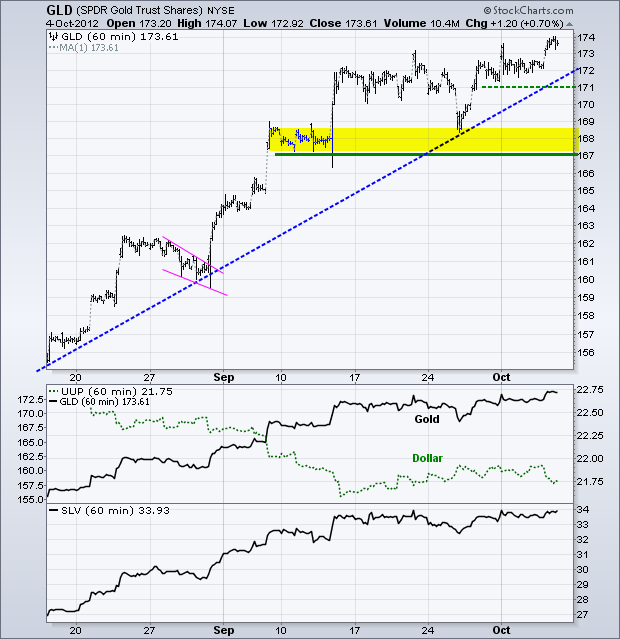