I get the feeling that this market does not want to go down. As with late August, the major index ETFs underwent a mild correction the last three weeks. There was a sharp decline last week, but selling pressure dried up and stocks firmed the last three days. Chartists should also keep in mind that the bigger trends are clearly up. The chart below shows SPY within a rising channel since early June. The ETF became oversold after the surge to 146 and has now worked off these oversold conditions. The red trend line extending down from the early September high defines the downtrend and a break above 146 would put the bulls back on track for the short-term. Alternatively, a rising flag/wedge formed the last seven days. A break below 143.8 would signal a continuation lower and target further weakness towards the next support zone in the 139-140 area. The indicator window shows CCI moving into the dip zone, which is the area that produced bounces in the past. SPY is clearly at a make-or-break level for the short-term and the employment report looms large on Friday morning. 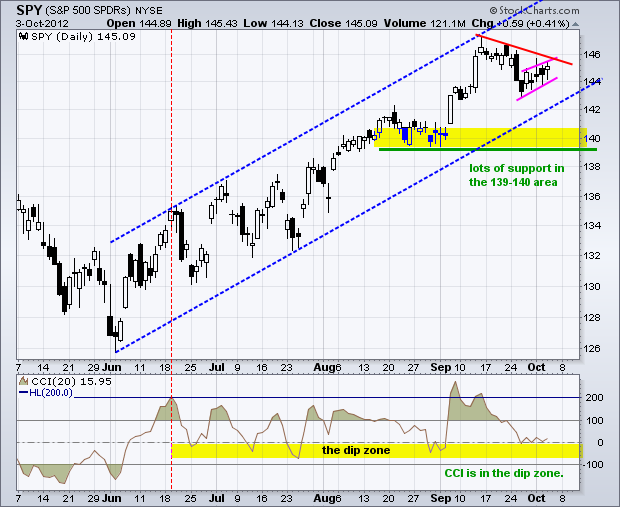 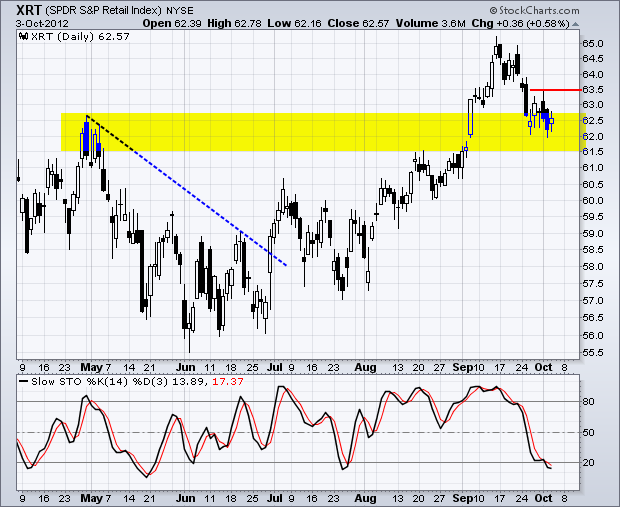 Retail will be in the spotlight today as several big retailers report September sales, which covers the back-to-school season. Among others, Macy's (M), Target (TGT), Gap (GPS), Costco (COST) and Kohl's (KSS) are scheduled to report today. The Retail SPDR (XRT) corrected along with the broader market with a pullback to broken resistance in the 62 area. A harami formed over the last two days (long black candlestick and smaller white candlestick inside). This inside day signals indecision that could foreshadow a short-term trend reversal. A move above 63.50 would break short-term resistance and confirm the harami. Also notice that the Stochastic Oscillator is oversold for the first time since late July. 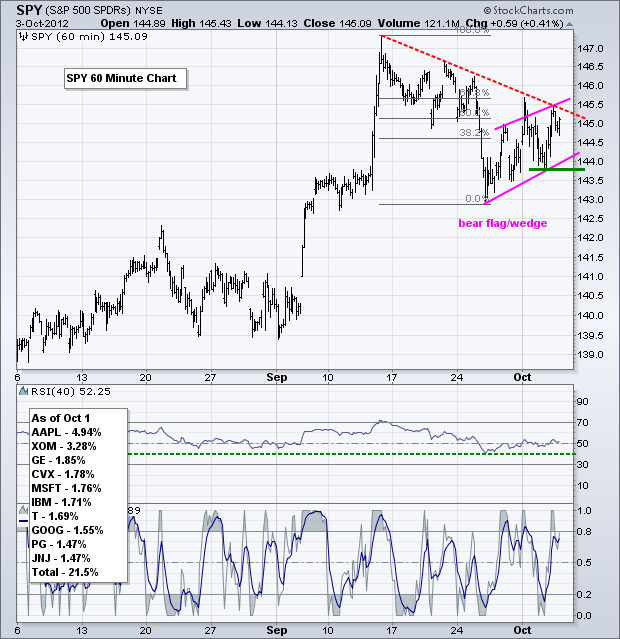 The 60-minute chart for SPY simply expands on the analysis above. The noose is tightening and we should see a break in the next few days. An upside breakout would reverse the three week slide. A downside break would signal a continuation of last week's decline. RSI is also at its moment-of-truth as it bounces along the 50 yard line. A break below 40 would turn momentum bearish. 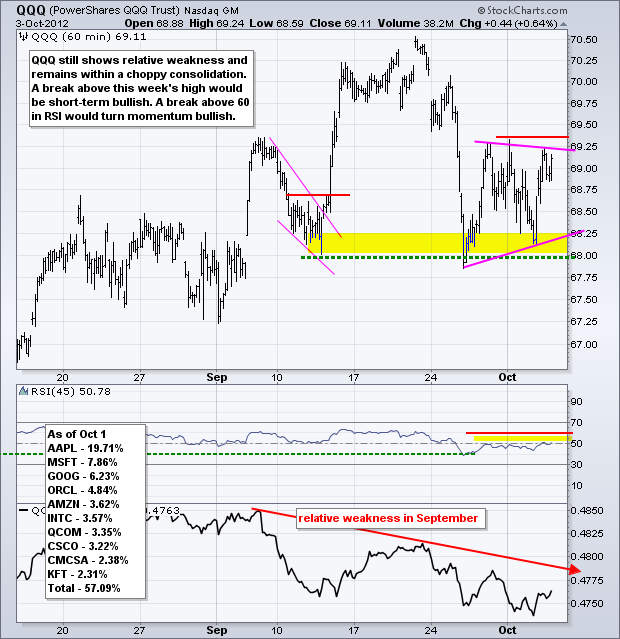 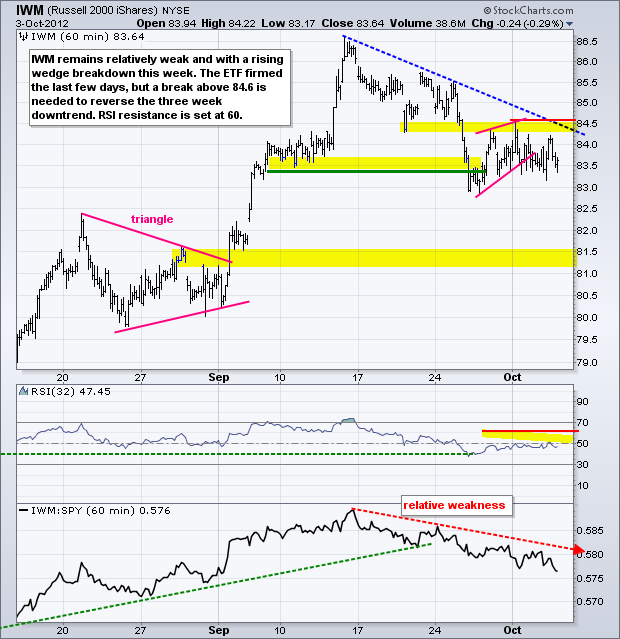 No change. The 20+ Year T-Bond Fund (TLT) surged and became overbought with the move above 124.50. The ETF consolidated the last few days to work off this overbought condition. A break above 125 would signal a continuation higher and be bearish for stocks. I am setting support just below the consolidation to allow for a buffer. A break below 123 would reverse the three week uptrend and be bullish for stocks. This is a big week for treasuries because of the key economic reports scheduled for release this week. 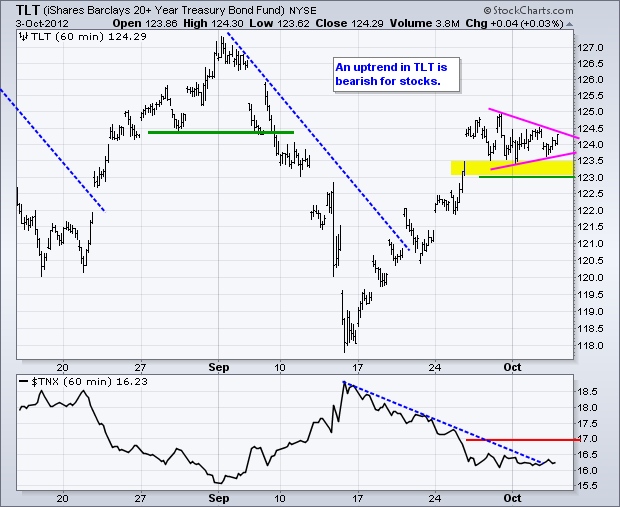 No change. The US Dollar Fund (UUP) remains within a rising channel and could be nearing its make of break point. A surge above the upper trendline would signal an acceleration higher. I am, however, setting key resistance a little lower at 21.95. Chartists should also watch RSI for a breakout at 60 to confirm. Channel support remains at 21.72 and a break below this level would signal a continuation of the bigger downtrend. 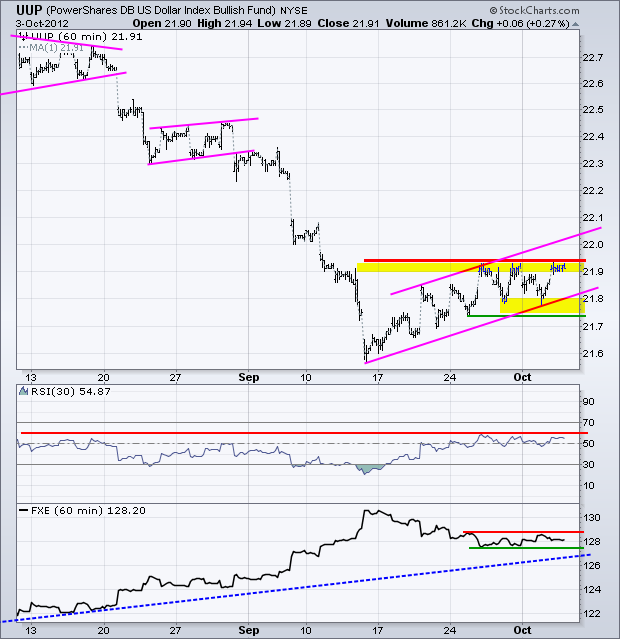 The US Oil Fund (USO) broke down in mid September, bounced last week and plunged again this week. The Energy Department reported a sharp increase in oil production on Wednesday. This supply surge triggered selling pressure in the pits. USO failed at the 38.2% retracement line and broke below its September low. RSI failed in the 50-60 zone to keep momentum bearish. 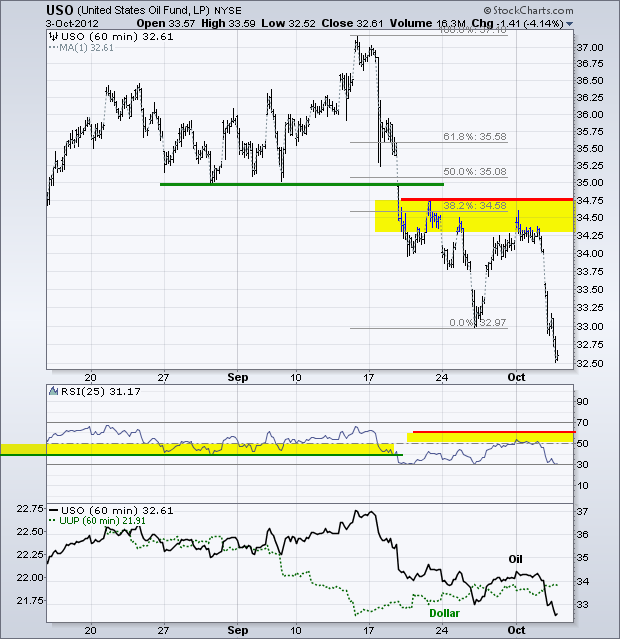 Even though the Dollar firmed and stocks softened the last few weeks, the Gold SPDR (GLD) held up quite well and remained near its September high. GLD plunged below 170, but quickly recovered and moved back near the top of its range. This recovery reinforces support in the 167-168 area. The trend is firmly bullish as long as this level holds. A break above 173 would signal another continuation higher for bullion. Thursday's release of the Fed minutes will shed more light on QE3 and could affect gold. 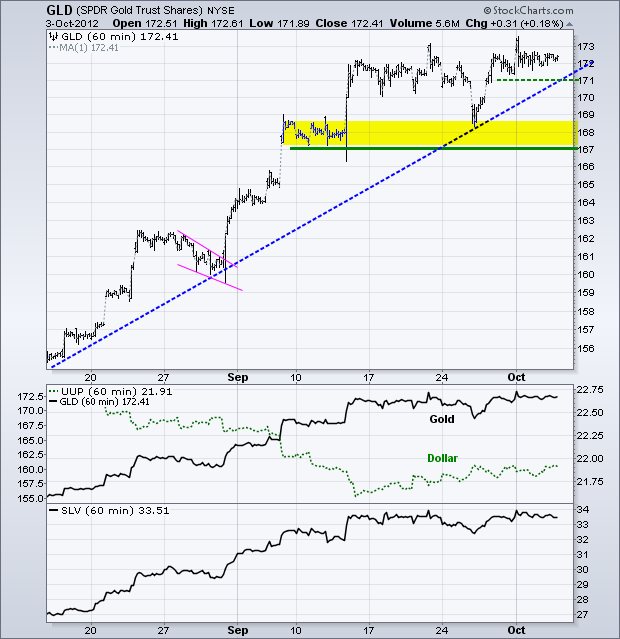