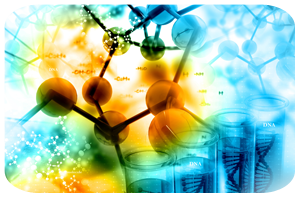 ... IBB and XBI Near New Highs

... The Biotech iShares (IBB) surged over 15% the last ten weeks and is on the verge of a new high. It has been a wild ride in 2018 with the ETF exceeding 118 twice and dipping below 102 three times. At this point, IBB looks both short-term overbought and strong. Renewed vigor in large-cap biotechs is a positive for the group and the healthcare sector. 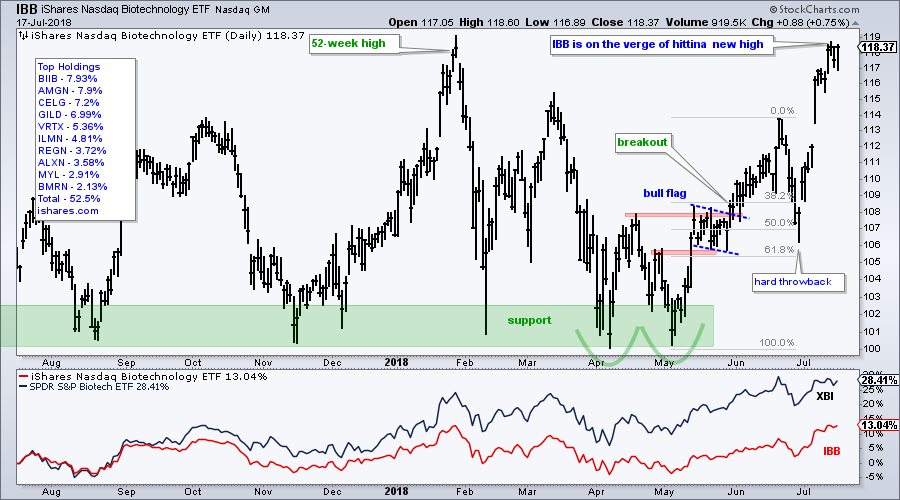 Despite this renewed vigor, IBB is still lagging the Biotech SPDR (XBI) over the past year. IBB is up 13% since late July and XBI is up more than double (28.4%). They are both up around 17% from the May low.

The next chart shows the Biotech SPDR (XBI) setting up with a bull flag. After a 52-week high in late June and hard throwback into early July, the ETF reversed near broken resistance and the 50% retracement. A flat flag formed the last seven days and an upside breakout would be short-term bullish. 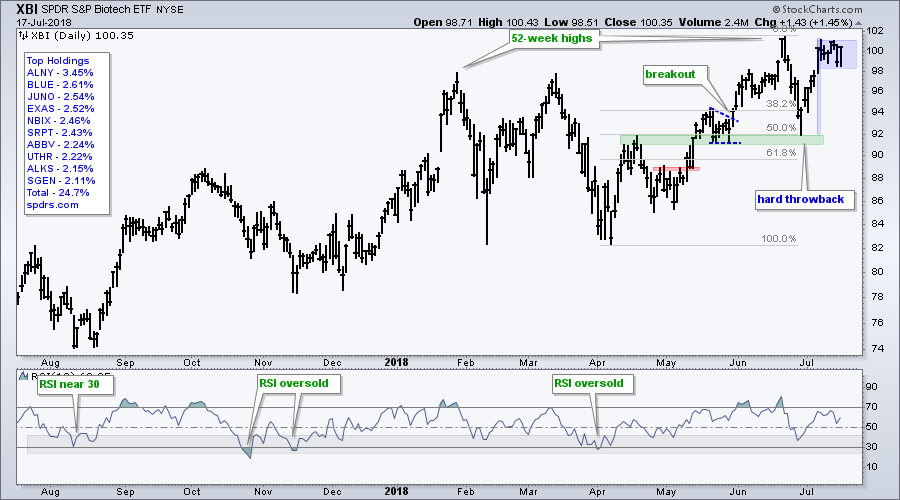 The chart below shows all five. I thought Facebook was broken after the March breakdown, but it proved me wrong with a gap and breakout in early May. The stock went on to record new highs in June and July. Alphabet broke out of a long consolidation in early June and hit new highs in late June and July. Apple is in a choppy uptrend with a series of higher highs and higher lows. Amazon and Microsoft are in steadier uptrends because the price ranges are a bit tighter. 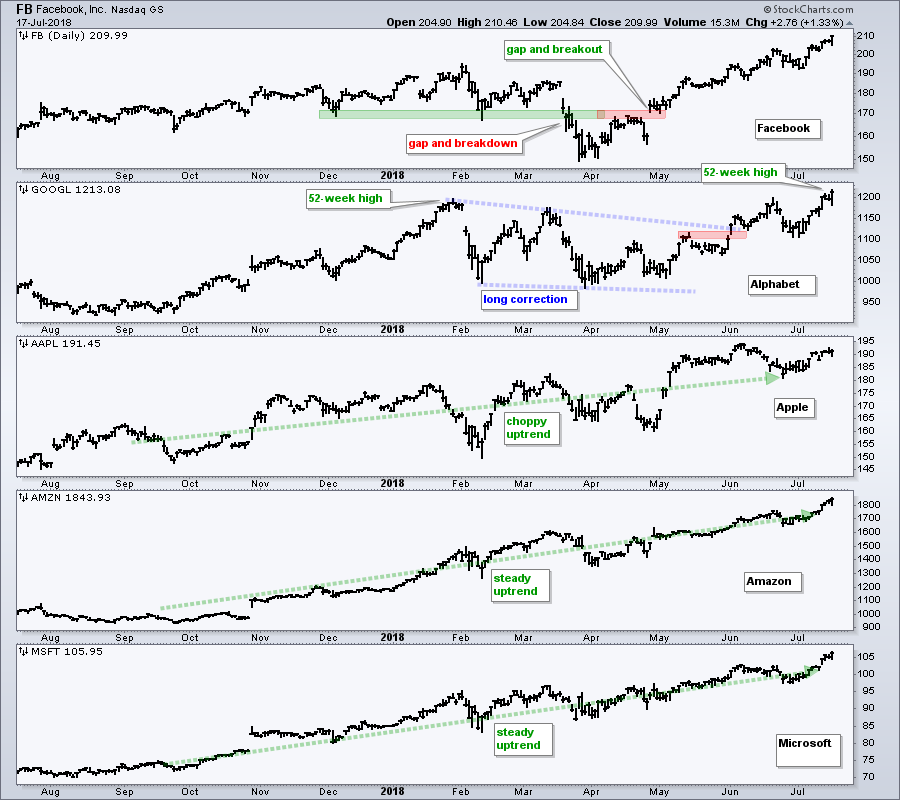 SOXX Turns Up within Triangle

The Semiconductor iShares (SOXX) is lagging the other tech-related ETFs, but the pattern at work looks like a large triangle consolidation within a bigger uptrend. This makes it a big bullish continuation pattern. First and foremost, SOXX hit a 52-week high in March and the 50-day EMA is above the 200-day EMA (not shown). SOXX became short-term oversold in late June and RSI moved back above 30 on July 2nd. It looks like an upturn within the triangle is underway. 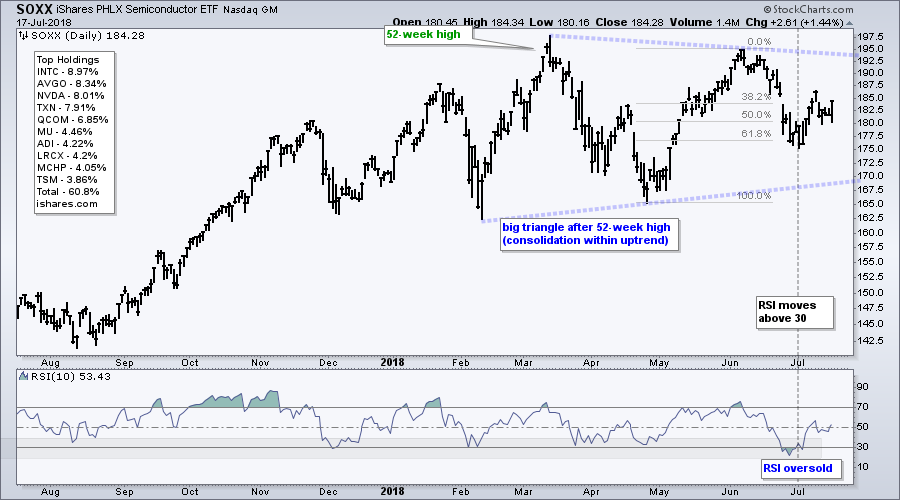 I typically use RSI(5) for the major index ETFs (SPY, IJR, MDY, QQQ) and RSI(10) for stocks, sector ETFs and industry group ETFs. The major index ETFs are broad-based with 100 or more stocks so a more sensitive RSI makes sense. Sector ETFs, industry group ETFs and stocks trade different than broad indexes so I use RSI(10) for a little less sensitivity. The line shapes for both indicators look the same. but RSI(5) will cross the 30/70 level more often than RSI(10). Put them both on the chart and compare.

It is earnings season so I tried to find some stocks that do not report in the next 1-2 weeks. The earnings date is posted on the chart, but you may want to double check. I use Zacks and IBD to find the earnings dates.

A Mean-Reversion Setup for Analog Devices

The first chart shows Analog Devices (ADI) with a triangle breakout, 52-week high and throwback that retraced 50% of the May-June advance. RSI became oversold during this throwback and recently moved back above 30. Thus, a mean-reversion setup is in play. 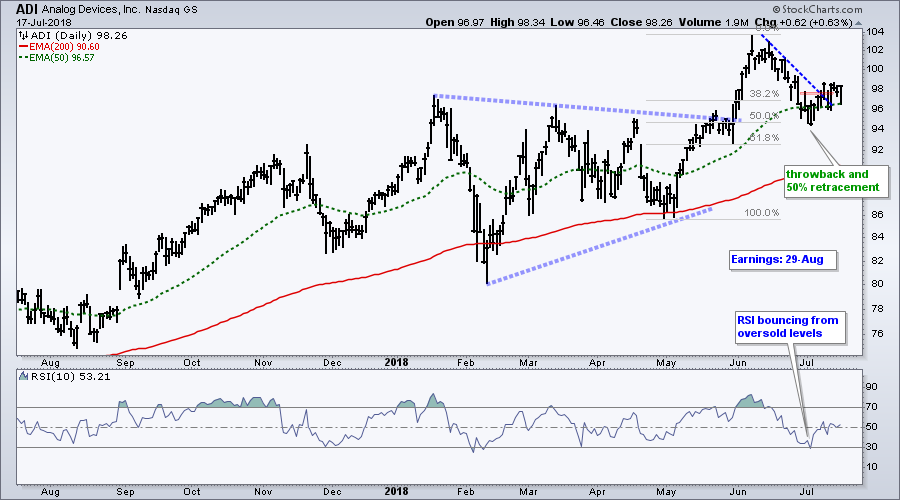 Two Inside Days for Cisco

Cisco is lagging its big tech brethren as it consolidates after a big advance. The long-term trend is still up and this could be a big rest before the next move. CSCO fell sharply last Friday and then stalled with inside days on Monday-Tuesday. These show indecision that could lead to a reversal. Watch 44 for an upside breakout. 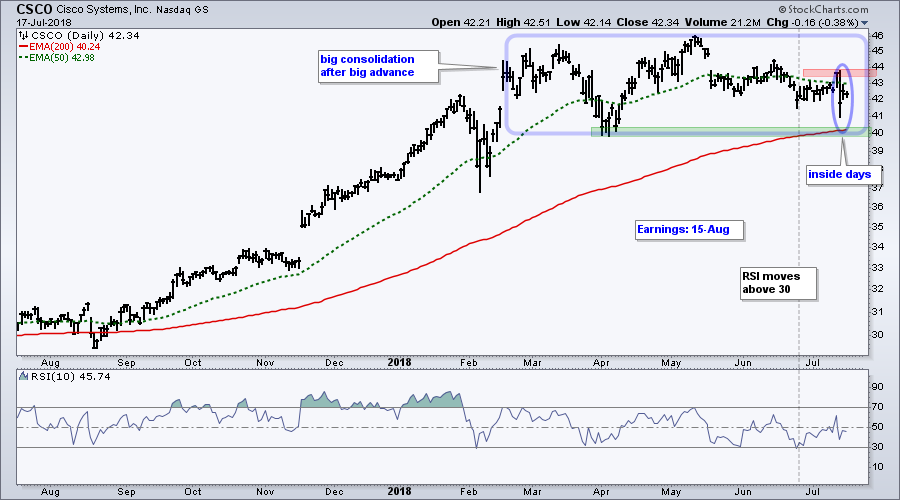 A Flag Breakout for ICE

IntercontinentalExchange Group (ICE) is breaking out of a flag formation and close to a new high. 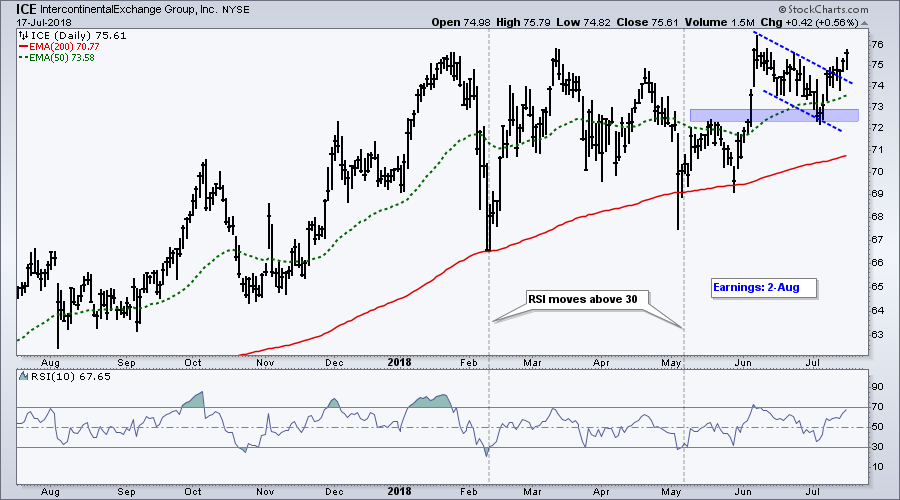 2018 has been a rough year for Perkin Elmer (PKI), but this healthcare stock bounced off support in late June, formed a small flag the prior five days and broke out on Tuesday. Also notice that RSI moved above 30 in late June. 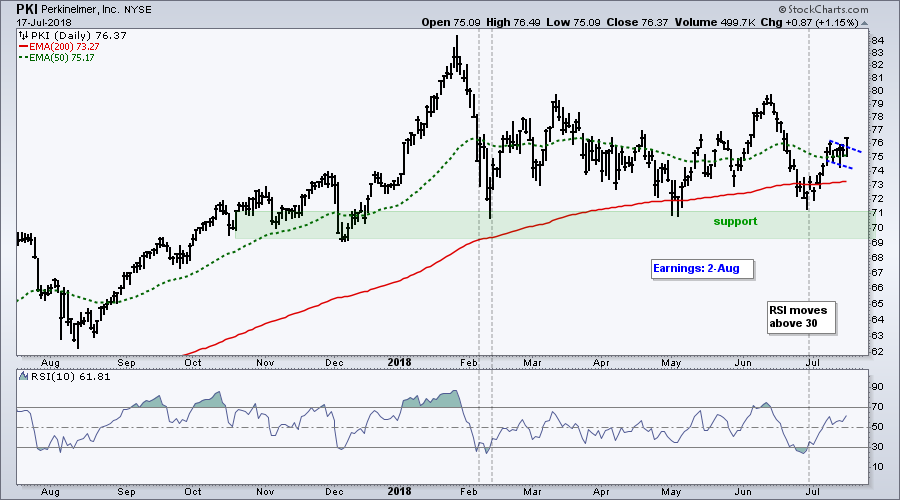