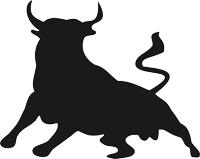 Today's bullish continuation pattern is the Ascending Triangle. This is a classic pattern that forms with relatively equal highs marking overhead supply and higher lows marking demand points. The equal highs mark a resistance level where demand was not strong enough to overpower supply. The higher lows, however, show demand coming in at higher levels. In other words, the dips are becoming shallower as demand increases at higher prices. A break above resistance confirms the pattern because is signals a victory for demand.

The chart above shows an Ascending Triangle taking shape in the S&P 500 SPDR (SPY) over the last three months. The higher low in October shows demand coming it at higher prices (above the August lows). The equal highs mark a zone of overhead supply in the 301 area. A break above this level would confirm the pattern and target a move to the 320 area. Note that the height of the pattern is added to the breakout level for an upside target (301 - 281 = 20, 301 + 20 = 321).

There are at least three more Ascending Triangles forming in some key ETFs. In addition, there are a number of bullish triangles and these patterns were highlighted in today's report at TrendInvestorPro.com. This report comes with a PDF ChartBook that features 60 ETFs ranked by chart performance.