Well, I had a great holiday and I hope you did too.

We are back in the saddle, scrawling the blog for 2012!

One of the first blogs I wrote was on Dr. Copper. I've attached that chart here. 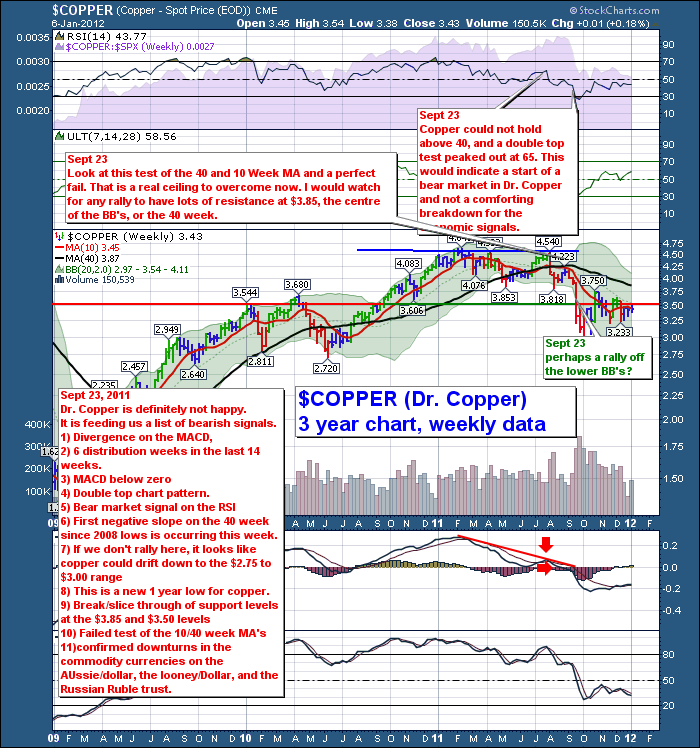 Well, 3 and 1/2 months later, we are back to the same level. Some higher some lower, but no net progress.

Notice on the chart above, I have drawn in a horizontal line that has been a very important level for copper for 5 years now. Support and resistance have resided here in the big picture.

Let's mark up the chart differently. 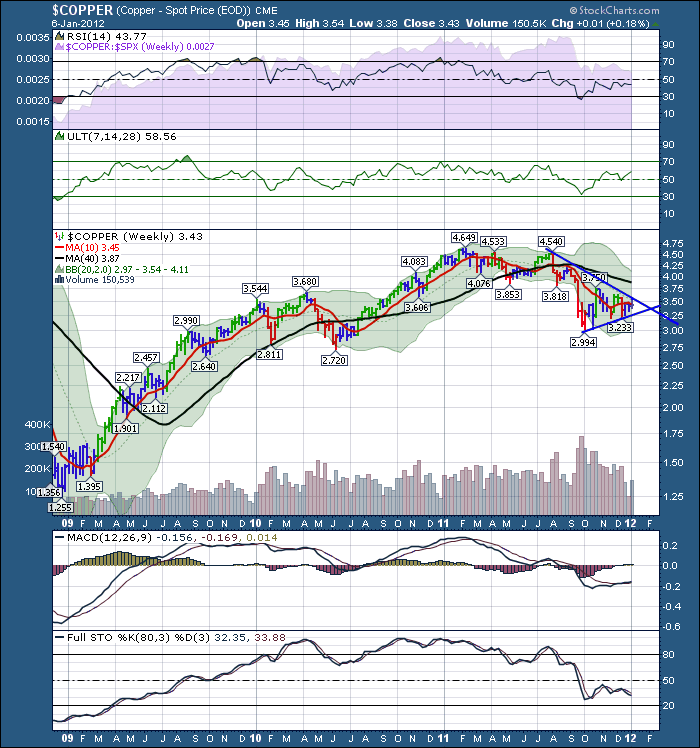 We have a pennant formation appearing which is usually a continuation pattern. It is easier to see it on a daily. 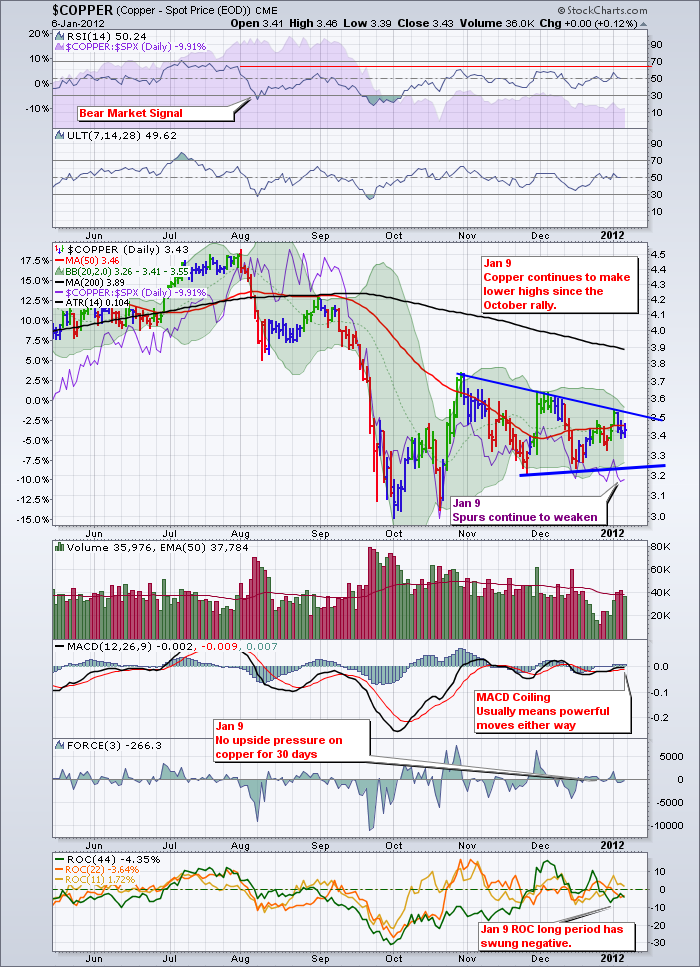 Here is where we have to be keen on our interpretation.

Looking specifically at the price chart, we notice that copper made a low on Oct 4th with the rest of the planet. Stocks, Bonds, commodities, The US dollar, the Cdn dollar, all had an inflection point there.

Copper rallied, pulled back and made a high Oct 27th like the rest of the market. So it did not lead the market in October, it was just following the market rhythms.

Since the October high, Copper has made lower highs. For  those beginning their understanding of technical analysis, lower highs and lower lows make a downtrend. So lower highs is a problem. It has also made higher lows. Copper formed a double bottom as the price in December was near (But higher than) the same level as the late November low. It is here that we need to watch the data closely as it comes in.

A series of lower highs and higher lows formed the pennant pattern on the Weekly. However on the daily the most recent data is less optimistic. It is holding support at the $3.20 - $3.25 level. If new buyers don't continue to step in at $3.20, I would suggest a target for Copper to drop another 15% or 20% from here to the $2.75 level where major support resides on the chart.

OK let's use some of our indicators to help us out. Will copper break to the upside or the downside?

Well the RSI is flat lining at 50, stuck under 65, so still bearish. The lack of momentum here going into an earnings period for stocks concerns me greatly. I want copper to he heading higher aggressively.

The Ultimate Oscillator is not giving us any clues. Flatlined at 50.

The Price action is poor. We have a downsloping 200 dma so that is a dark cloud. We have a price that is having trouble staying above the 50 dma, but fighting valiantly to do so.

The biggest concern I have on the chart is my purple SPURS line. It is making lower lows and that is not good. That is a massive concern, red flag, grab another coffee, stare harder at this chart. You want to see this moving into new high ground if copper is about to surge upward. Huge concern here.

(the purple shaded area behind the RSI) is the same as the purple line behind price. I like to post it in two locations so if it is covered by one, I can see it on the other)

The MACD coiling is good. It means a major move is coming. My concern is it is stuck below zero and we are seeing copper SPURS weaken.

The force is showing more negative force than positive force in the last 30 days.

The ROC indicators are dropping below zero. That is a sell signal to me when all three lines are below zero. So not yet.

This chart says sell to me. I like to look at a lot of other charts when I look at copper. The main one is the USD. What is that chart telling us? 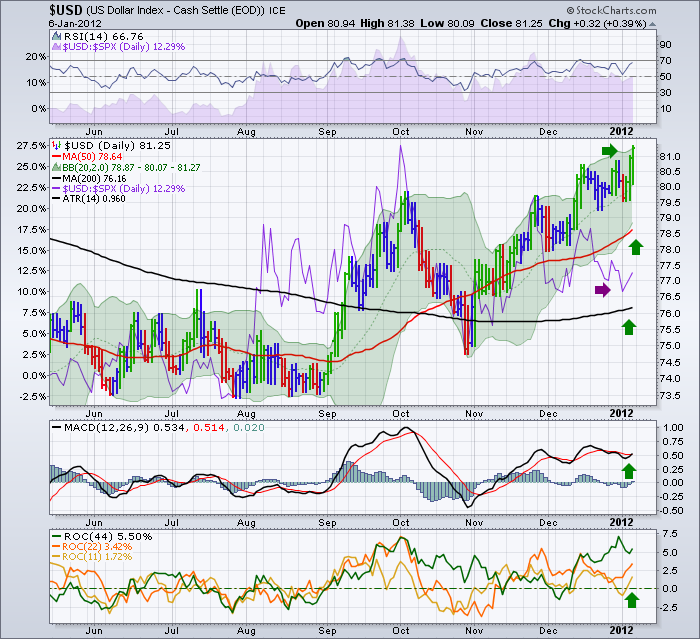 OK. This chart is telling us that $USD is going higher. Every thing is moving up. SPURS are sideways, but the push is higher here. Commodities including Copper usually goes the other way from the $USD. If the $ is up, Copper, Gold, Oil are going down.

With $Copper slowly breaking down after resisting the $USD move higher throughout December, I am really worried about $Copper. The $USD hitting fresh highs is a big concern for the entire commodity complex.

My bullishness is slowly being smacked down.

Well, that is it for Copper today. On another Note:

I read 'The Investment book of 2011' over the holidays. I read it three times and took notes. I was very intrigued by the book, and I want to send my thanks to Ed Carlson for taking the time to compile the work of George Lindsay.

George Lindsay had at least 6 different methods of estimating pivotal turns in the market. When they started to coincide, he got more in tune with a date. He predicted well ahead of time many of the spectacular turning points in the market. He was very close on the top of 1987 before the crash. He had passed away in August well before the market top.

For those that wish to become students of the Technical Analysis world, this book is an interesting read. Most of his work focused on time. Finding six different methodologies to work with time was the most amazing part of his work. He was given the Market Technicians Award in 1991.

Let's work toward a profitable trrading year. $Copper needs to find some enthusiasm soon. There is a reason it is called Dr. Copper. If it's not healthy, neither is the market.