In the market rally of August 28th , 2010 I sat firmly committed to being short while the market roared ahead in the face of global issues. It was a painful lesson to ebb and flow wth the market. 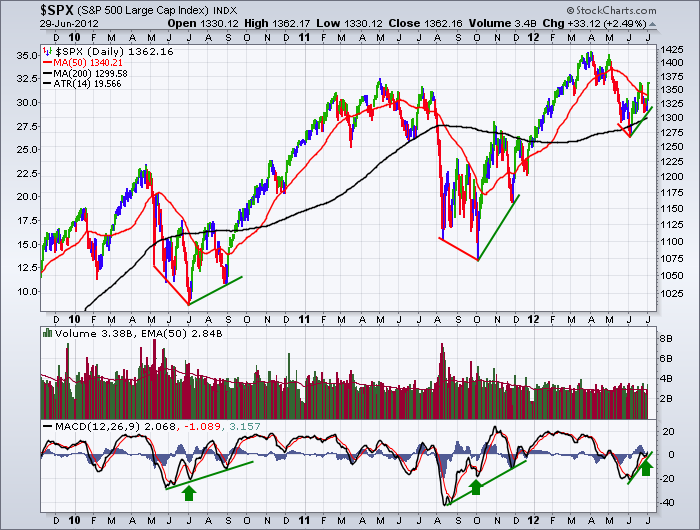 Friday reminded me of the experience again. Remember July 1, 2010 rally, gripping and strong.

Remember the August 28th, 2010 rally, gripping and strong when everything seemed doomed.

Remember the October 4th 2011 rally just when the charts were breaking critical support.

Is this the June 29th rally where the Europeans have actually started the process of making the Euro more than individual nations? If so, it could cause a tremendous rally.

All that as a backdrop. When the markets failed late last week and then continued lower, the charts really enthused the bears. I wsa getting more positive, but that move scared me. Getting short looked like a great trade. Well, the $SPX bounced off the 200 DMA and soared higher. Now we are at a resistance line after a big rally late Thursday and a strong push higher Friday. Difficult for people who were short.

I have written annotations on my charts that the markets rally when they know they have gotten the politicians attention, not when the problem is solved. Today, this feels accurate.

So, rather that continuing to live on the wrong side of the trade, I tried to build a group of charts that would help me with momentum and take my emotion out of the trade. I actually got a buy signal after Wednesday's close. I looked at the market Thursday and it was weak. I was driving so couldn't watch the charts. Checking in after the close, I noticed the massive reversal rally. Well, Friday was launched higher. My little system starts to show more positive sentiment and helps me become less pessimistic. When the prices failed on June 21st, I was not happy, but I was politely surprised to see them turn bullish on my little system on Wednesday.

Among other things, I have been getting bullish about the miners and gold lately as my blogs noted. Even Natural gas worked out. But the move in Copper was stunning Friday. I have so many charts telling me great things, I don't know where to begin.

The Elliot wave theorists are working hard because the moves have been impulsive both directions. The sentiment is dire, which becomes a force for the markets to push higher as the most reluctant shorts cover. Everyone has their method, we'll have to see who is right.

1) a rising MACD making much higher lows and trying to cross above zero on most major markets. SEE above. 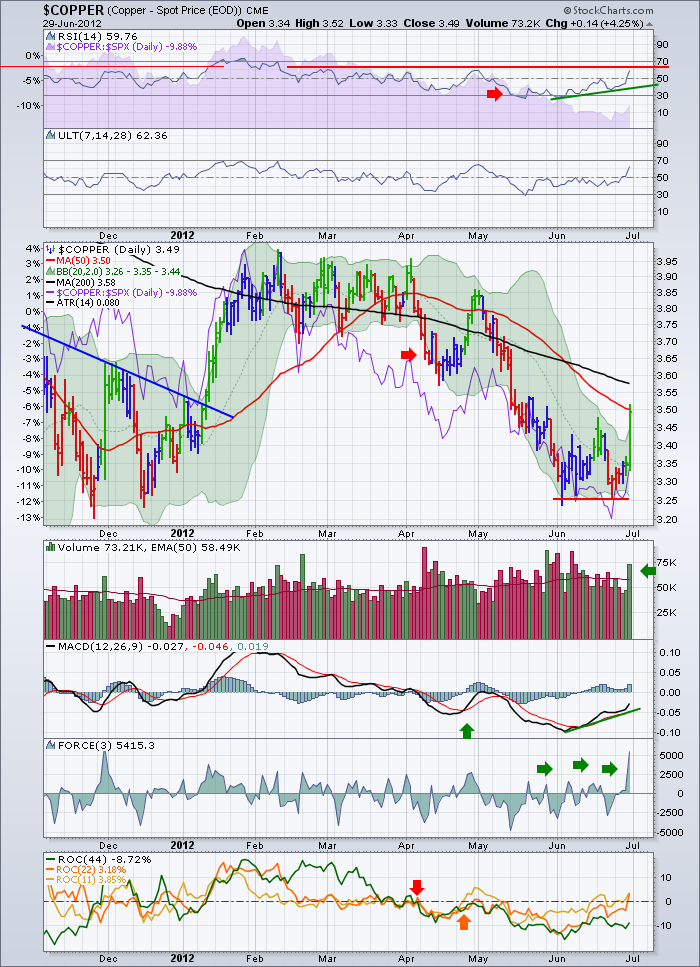 3) $USD move was vicious. Notice the shape of the MACD. It is almost identical to the April  May 2012 MACD on the $SPX. This is what topping MACD's look like. The recent hump is dramatically lower than the previous bump at or near the same price level. $Gold had a great example of that earlier this year. 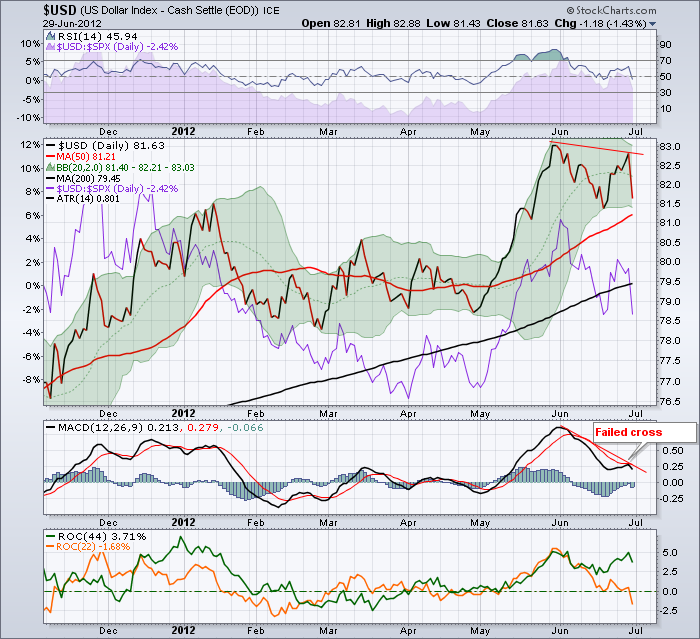 This tells me the world expects the money printing to cause inflation with all the commodities having 6 sigma moves as defined by Zerohedge. 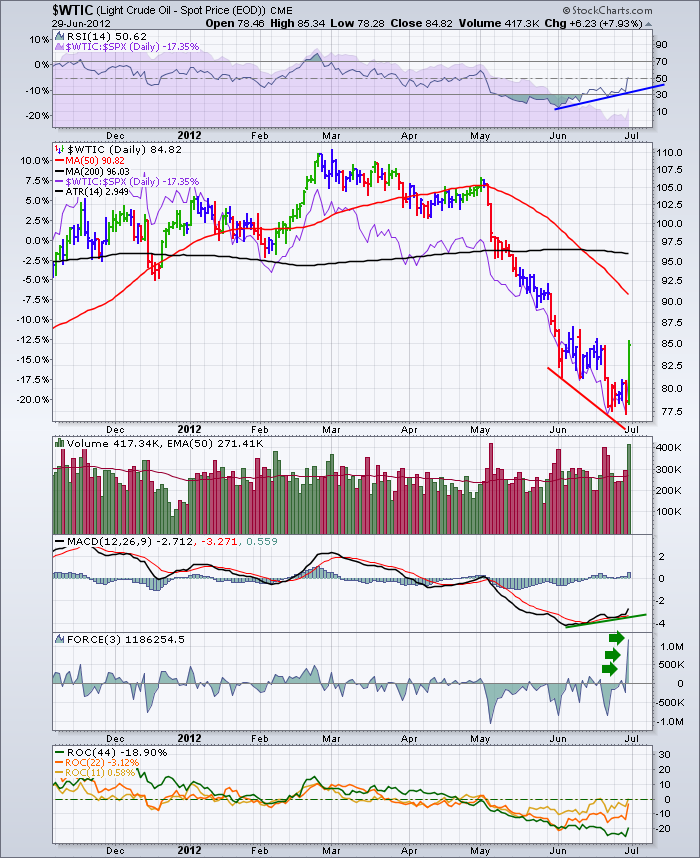 All that to say, this market is going to try and go higher from here. Obviously as events unfold it may change, but this was clearly a crushing blow to bearish thoughts. The chart of the month for June I think will be the $TSX with its bullish divergence on the weekly. 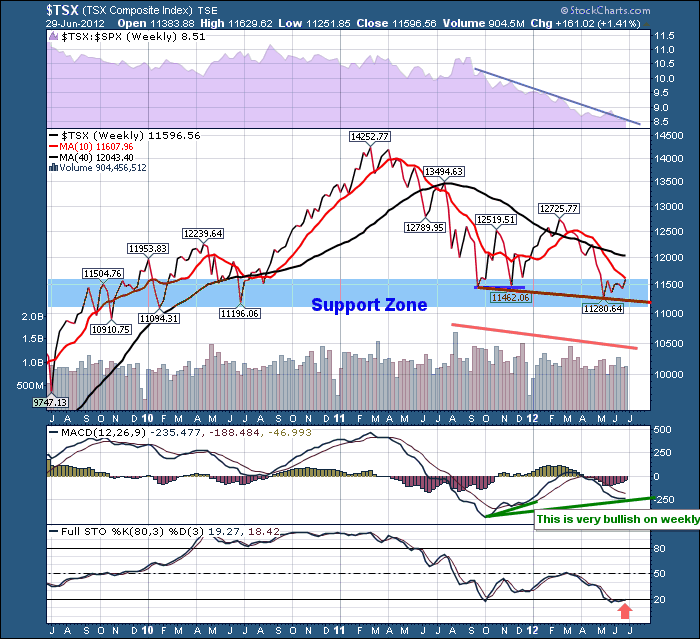 So Happy Canada Day. It looks to me like we started the rally today. Let's get through July earnings and see if it can keep going or is it a bear market rally? I don't know, but bear market rallies usually move fast and furious, as everyone is caught short.