The last time I wrote about healthcare stocks, my thoughts were around Valeant (VRX.TO). I had no idea it would implode like it did. Is Valeant About To Cause Heartburn?

Here is the current Valeant Chart (VRX.TO). This might just have enough bad news baked in, but I'll leave trading falling knives for some other style of investing. 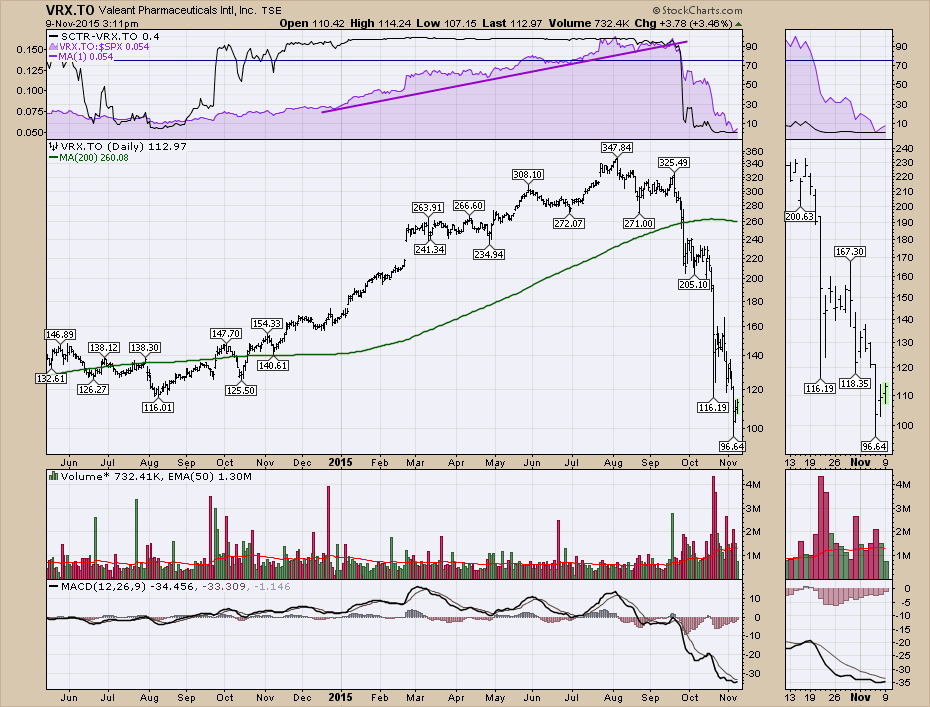 Using the SCTR, we can see a few stocks have a ranking above 75. I'll use charts that have a minimum volume of 100,000 which is still light, but we can review them. 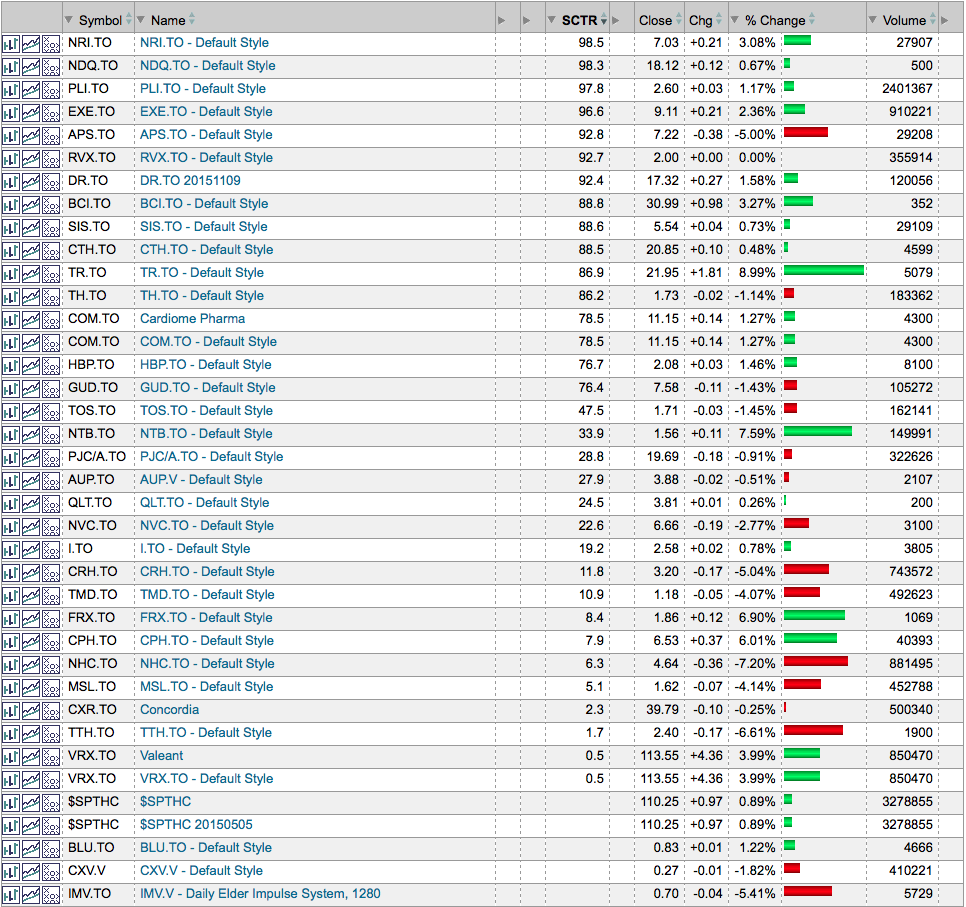 Starting at the top, Prometric Life Sciences (PLI.TO) is only a $2 stock, but the SCTR reveals some interesting trends. The stock dropped with the overall market in August and spent the majority of the year between $2.00 and $2.80. After surging back up to six-month highs last week, the stock looks like it is getting its momentum back. After a 60% move, it needs a pullback, but for those that like fast moving trades, this one might qualify when you find your entry. 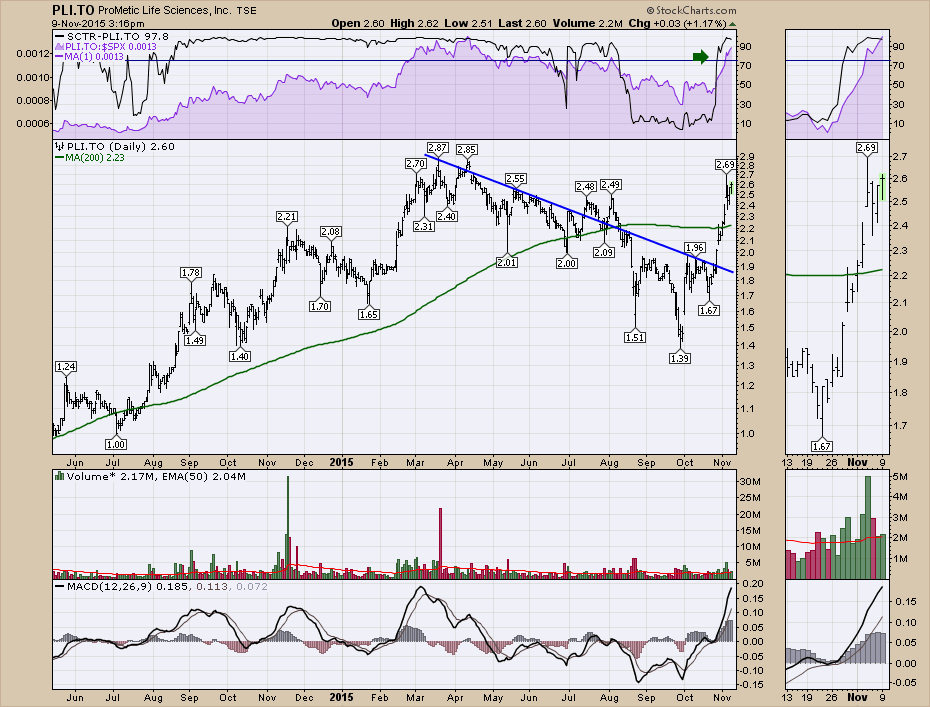 Extendicare (EXE.TO) launched off a support resistance area today to new highs. This has a good looking chart and is in a defensive area of healthcare. That might be more important as my post on Friday mentioned the $TSX was resuming its long-term bear market. 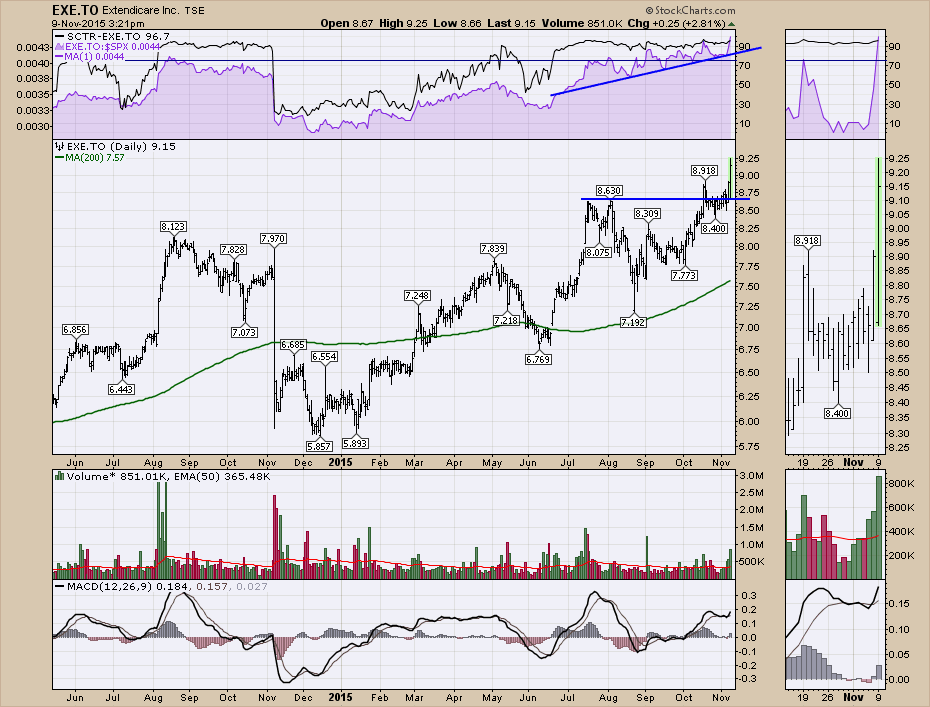 Next is Resverlogix (RVX.TO). This stock had a beautiful volume accumulation earlier in the year and the surge today might just be the start of something bigger. I'll leave that to you to decide, but the SCTR shooting back above 75 is nice. I don't particularly like the price action today with a gap up and trading lower all day, but a one-week gain of 30% is pretty big. 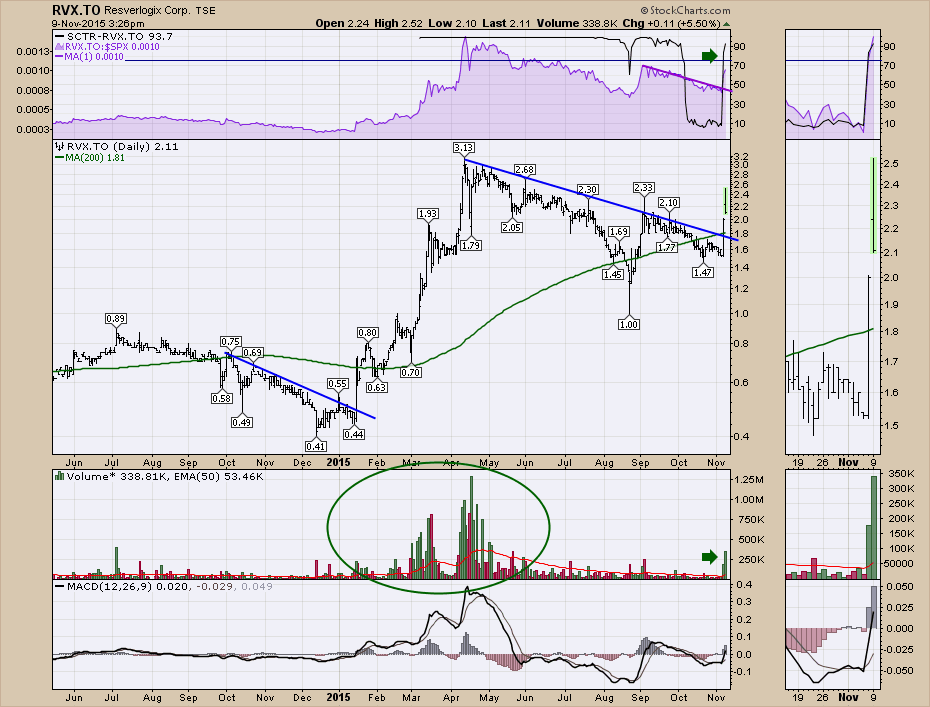 Medical Facilities (DR.TO) has been oscillating around the $16.50 level for 18 months. As this is also a defensive stock in the healthcare sector, this might have some room to run. 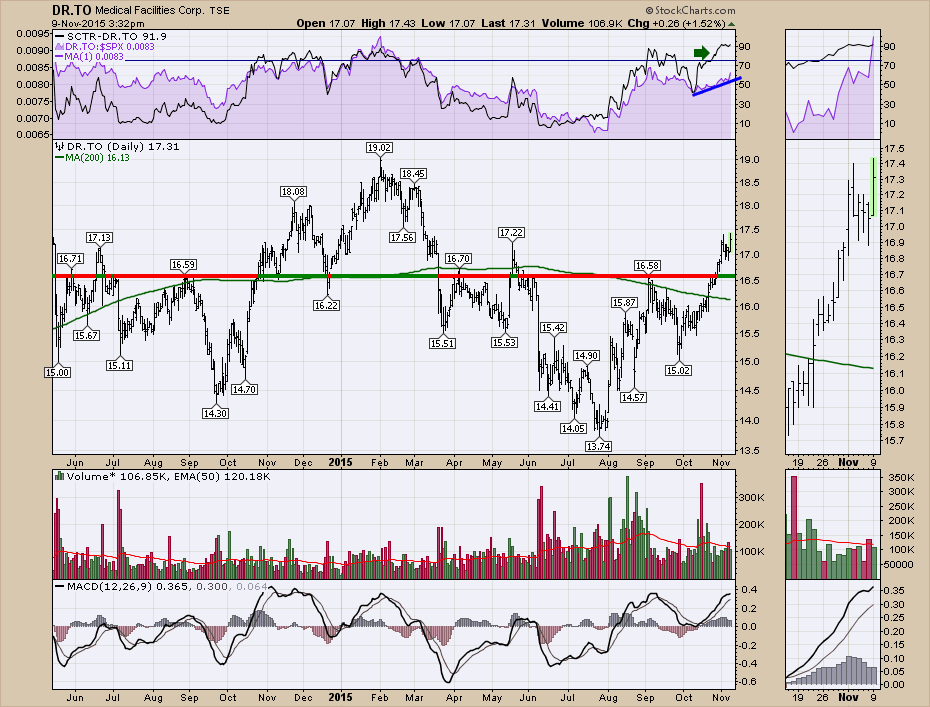 Theratechnologies (TH.TO) has had a very interesting year. After surging 800% earlier in the year, it has gently pulled back without severe downdrafts. It is trading roughly 30% off the highs and the SCTR is still up at 90% because it is being compared to the other Canadian stocks which have really been weak. Maybe the 200 DMA just below at $1.51 will provide support. April through June saw the price action stall around $1.50, so that also bodes well for that level as support now.  If the stock could break to one-month highs on $SPX relative strength, that would probably break the price trend. The MACD looks like it is trying to make a higher low here so that adds interest as well. 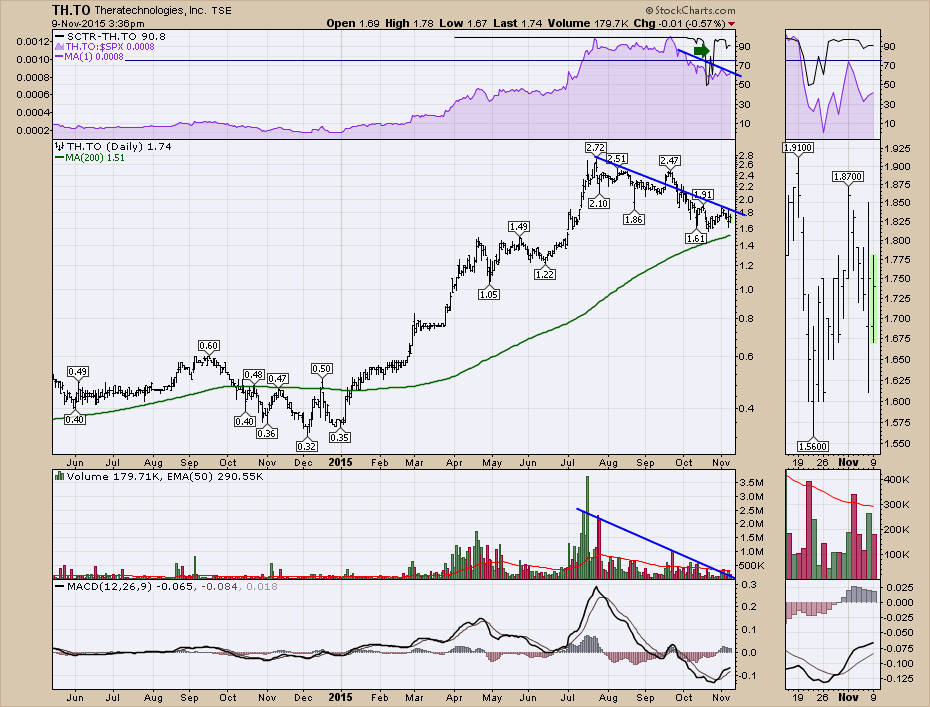 A little further down on the list is Knight Therapeutics (GUD.TO). After surging to $10 in late February, the stock has wrestled back to $7.50. It is in a pennant pattern currently. The declining volume is normal in a pennant and a breakout either direction could probably be expected soon. Considering all the selling in Healthcare with Valeant and others like Nobilis and Concordia, this stock has held up pretty well. 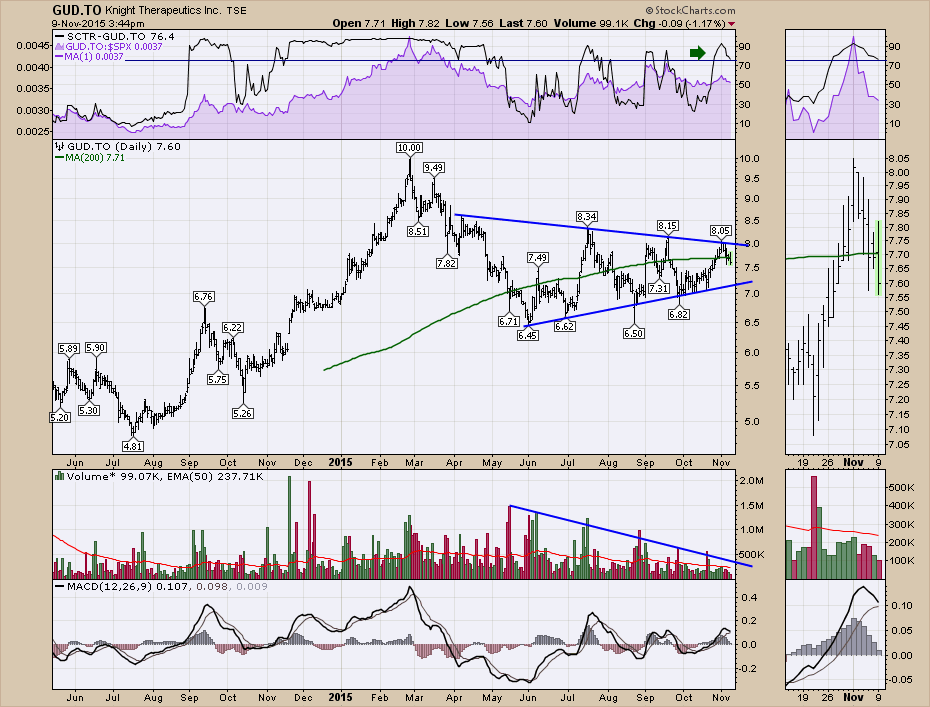 Well, after a big beat down in health care, there still looks to be some interesting charts. I'll be doing a webinar covering off Canadian stock market issues Tuesday at 5 EST. You can register for the webinar by following this link.The Canadian Technician LIVE 20151110. For readers in Calgary, Jason Longshaw will be speaking live at the Calgary CSTA Chapter meeting Tuesday, November 10, 2015, at 6 PM MST. You can register for that meeting at the CSTA home page.