In the world of central bank stimulus, currently China, Japan and Europe have some form of stimulus going. Recently, Mario Draghi from the ECB said they would look at increasing the level of stimulus in their December policy meeting.

While most of the global markets have been trapped under their 200 DMA, this week a lot of the European charts broke above on this notion of more stimulus coming on board. As all currencies seem to be endlessly dropping to the US currency, investors choosing to work in European investments may need a hedged product to protect themselves against currency swings.

Below is an example of a European High-Quality ETF that is hedged to the Canadian Dollar. ZEQ.TO. I like it because the price action has pushed the SCTR back up above 75. I would be more interested if the relative strength (SPURS) shown in purple could break out of the downtrend. 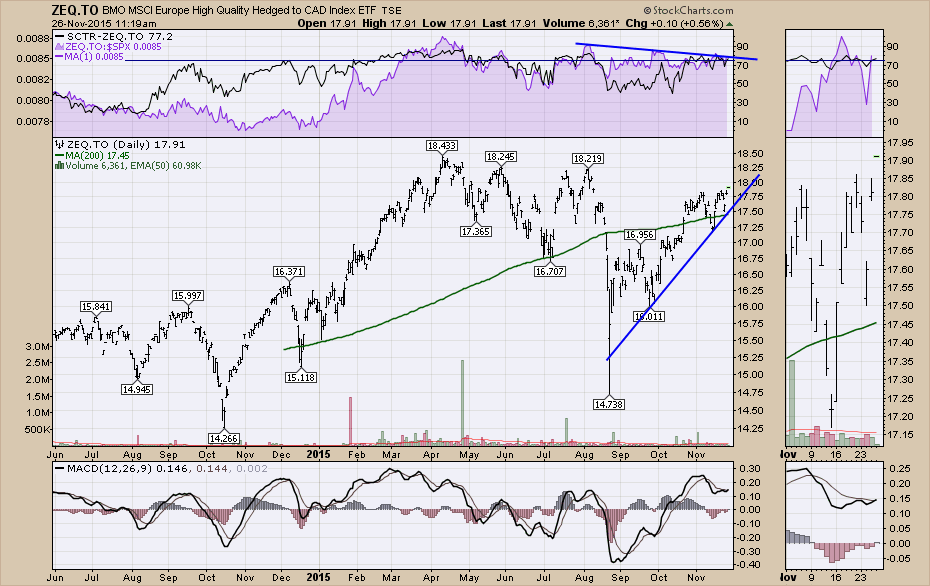 If we look at the zoom panel, we can see it started to gap lower on Tuesday of this week. Mario Draghi delivered more hints at new QE on Tuesday and the price closed up on the day from the open. The last two days have had big massive gaps on the open. Today was a gap to three-month highs and it looks set to keep going. Japan also broke to three-month highs this morning.

While the global economy is still very slow, with shippers and ports struggling on zero growth, the market continues to climb. It looks like the European market will be heading higher on more stimulus. The stimulus usually weakens the currency, so a hedged position is probably warranted. There are other ways to play the move up in Europe, but this is just one example of a Canadian way to express a position.