One of the signs of a bull market is when all the indexes are making new highs within a few days of each other. One of the signs of market weakness shows by having different indexes not confirm new highs together. So the question in the title is really asking if we step back, are we on the edge of a market precipice (Cliffside View) or are we just pulling back before resuming the uptrend (Helicopter View)? That's always a good thing to check.

Recently, the $TSX hit a new 52-week high, which we would regard as bullish. One of the problems associated with the market right now in the USA is that only the Nasdaq 100 ($NDX) is making new highs. Canada recently made a new high that coincided with the $NDX new high.

The chart below needs more discussion though. If we look at the period of August 13-15, all seven of the indexes were making new highs together. That is a very bullish scenario. Even on September 7th, almost all of the markets were recording new highs or very close, highlighted with an orange arrow. The $TSX and the Nasdaq 100 both made new highs on October 24th, but looking down across the rest of the indexes, we can see the progression lower, long before the October 24th top. I have marked the highs for each index with a green arrow. While the $TSX has not broken to new three month lows, it is an important clue for Canadian investors that a major divergence is in place on many of the US market indexes. 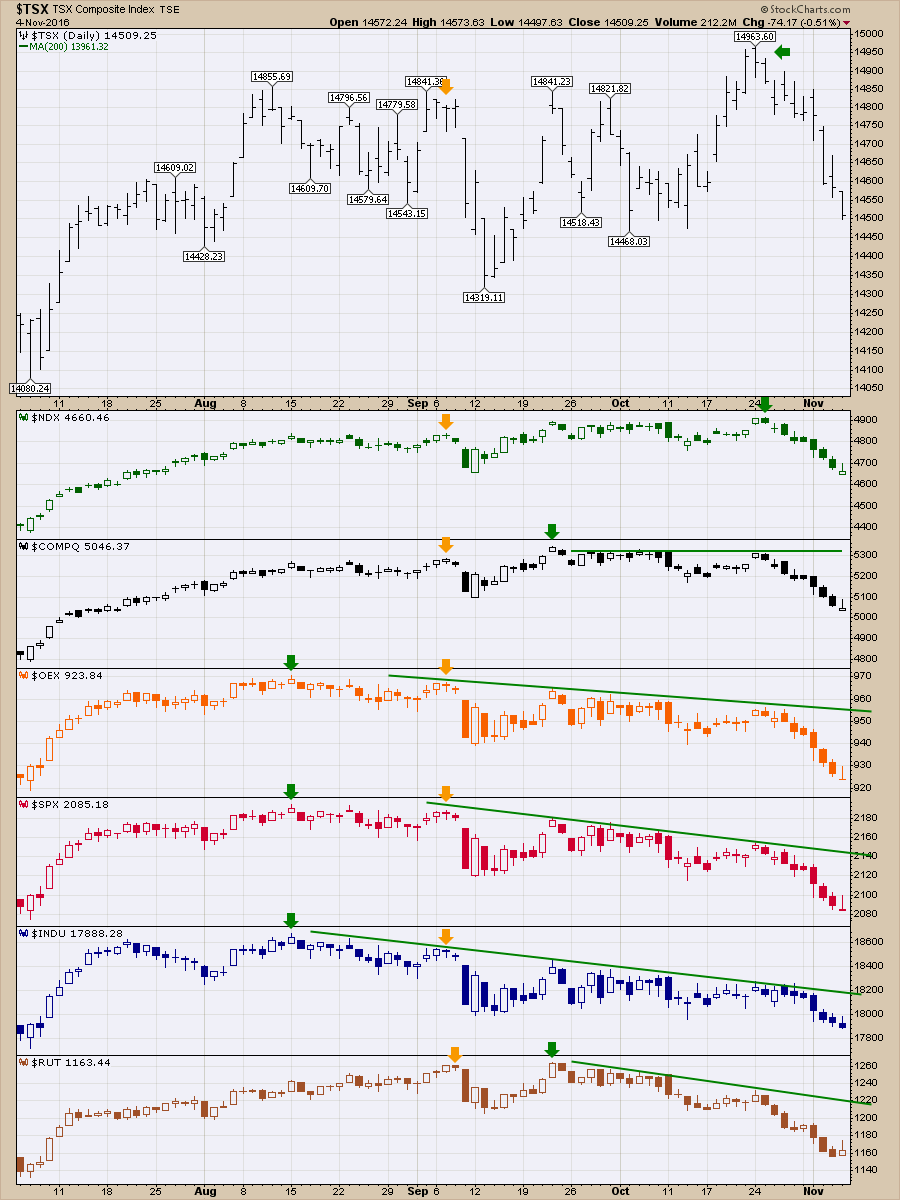 So while the bulls and the bankers want us running head first towards the new year, the charts now have one common thread in the US, they are all at three month lows with divergences on the recent highs. When the markets pull back together, then surge to new highs together, that is the price action we normally see in an uptrend. Currently, only the downtrend is in harmony. In September when we were pulling back, all the markets were in sync. In October, they were not in sync before pulling back.

You may remember in 2008, the $TSX went on to make new highs, while the US market was deteriorating.

Let me switch to a wider view outside of America and Canada. I like looking at the indexes for their country priced in local currency, not the US dollar ETF. An example would be looking at the $TSX shown above, it is priced in Canadian Dollars, not US Dollars. Globally, of the major market economies that I follow, only the Bovespa in Brazil ($BVSP) and London's $FTSE have made higher highs than 2015 in their local currency.  Smaller economies like Mexico, Argentina and Chile have as well.

However, over 2.8 billion people live in China, India and Indonesia. Their markets have not confirmed the new highs.

Actually, the country list coming up short of the 2015 highs includes China, India, Indonesia, Russia, Japan, Vietnam, Germany, Thailand, France, Italy, South Korea, Spain, Australia and Canada. Yes, this list of countries have not taken out the 2015 highs while the US market did.

If we are in a bull market, it better show its horns very quickly. This global divergence does not resemble the big bull markets where the majority of the stock markets move higher together. While this information does not help us on a daily basis, it is pretty important to be aware of the larger dynamic on a global basis.

I recently did a few webinars, trying to clarify the market information for investors. If you are not aware of how fine that picture is, I would encourage you to watch Commodities Countdown 2016-10-27 and then the Commodities Countdown 2016-11-03. There is also the Canadian Technician Webinar 2016-11-01. I have been bullish until late September so I am not quick to jump on the bear bandwagon. But when the time comes, keeping your capital becomes more important than making money.

I will be hosting Martin Pring with a Webinar on Tuesday. Martin Pring 2016-11-08. I will also be hosting a Commodities Countdown Webinar on Thursday November 10th. If you miss any of our webinars be sure to check the Webinar Archives for watching them when its convenient for you.