This week saw some big surges in Copper, Steel, Rare Earth Metals and Lithium stocks. Although Copper had been unable to make new three-month highs for almost a year, the copper chart surged up to a new seven-month high this week, as seen below. Above the copper panel is the US Dollar, which is generally a pretty good mirror image of the copper price. If copper is rising, then perhaps the US dollar is about to break down? Does this mean the commodities are finally going to run and copper-related stocks can have their day in the sun?

The Copper chart is flashing some nice connections to a rising trend. The PPO, which displays momentum, made a significantly higher low on the December 24th low as compared to the August/September lows. As the PPO crossed above zero, this is also a bullish trait. On the Full Stochastics, notice how the indicator could not make it to 80 during the downtrend; every time it rolled over, it pushed down again. Now, the indicator has made a higher low above 20 and subsequently soared up above the 80 level, which is a nice change in trend. 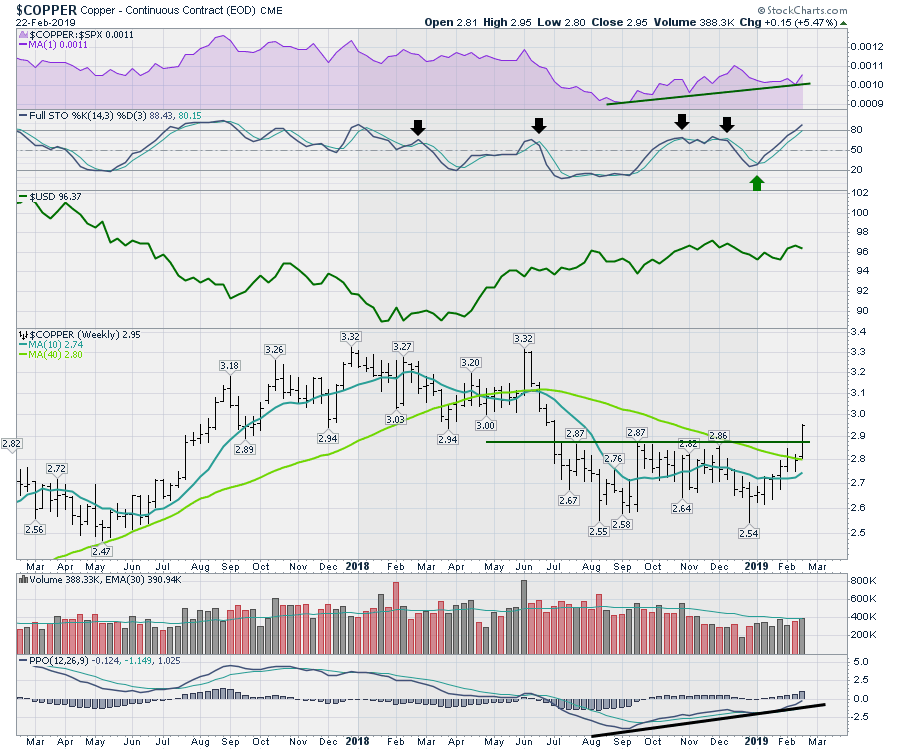 Steel showed some strength as well, with the Steel ETF (SLX) stamping out a new multi-month high. Relative strength compares the price action of the main price chart to the price action on the S&P 500 ($SPX), rising when the stock in question is outperforming the $SPX. The trend appears to be changing this week, breaking above the downward-sloping line on the purple area chart. The Full Stochastics indicator is showing similar traits to the Copper Full Stochastics on the chart shown above. The Full Sto could not reach 80 in the down trend - as of this week, it is now just short of it.

As price is testing the 40-week moving average (shown in green), this can be a place where price rallies in bear markets are sold. It also coincides with a major horizontal support resistance level at $41. One concern is the disappointing lack of volume on the breakout this week; however, it was a four day trading week. Even if you prorated an extra day of volume into the calculation, the result would be less than half of the moving average volume. Light volume on a breakout can be a sucker's rally. Stay tuned! Lastly, the year-long down trend on the PPO has been broken and the indicator is accelerating higher, which is very positive. 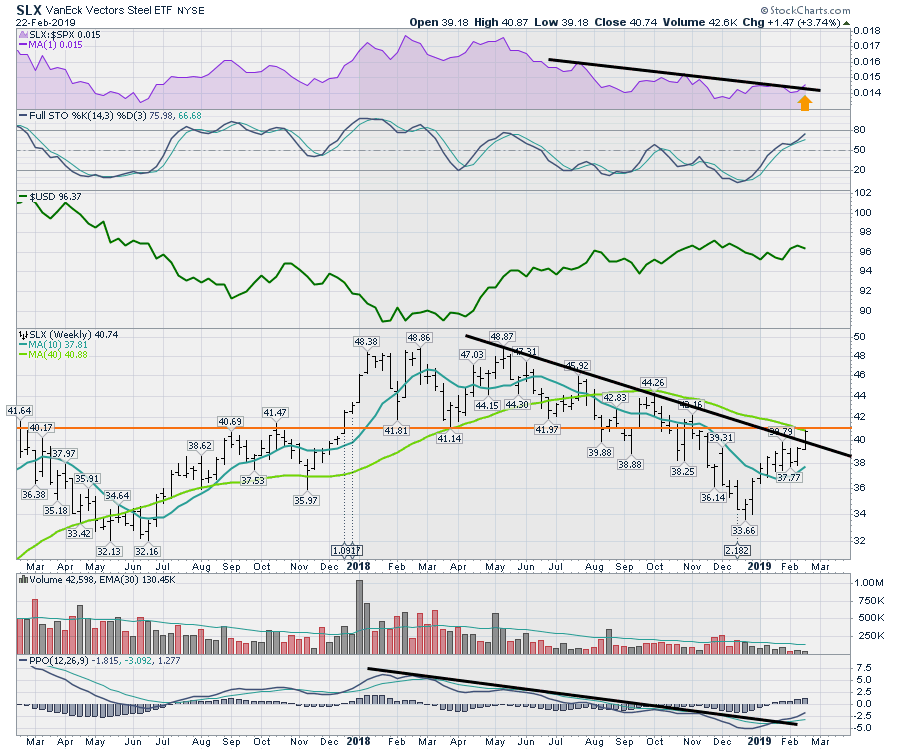 The $USD is in a major gunfight against the rest of the world's currencies. This week, the tension increased a notch, but no resolution to the battle showed up on the charts. The US Dollar continues to trade between 95 and 97. After the price rolled over last week, it did not resolved meaningfully to the down side this week. The RSI shows each successive peak as having less strength. The MACD, which measures momentum, also has had a meaningful down trend across the peaks since last June. If the RSI and MACD broke above their down trend lines due to a surge in price, I would expect a significant surge. The price pattern is an ascending triangle, which usually resolves to the upside. 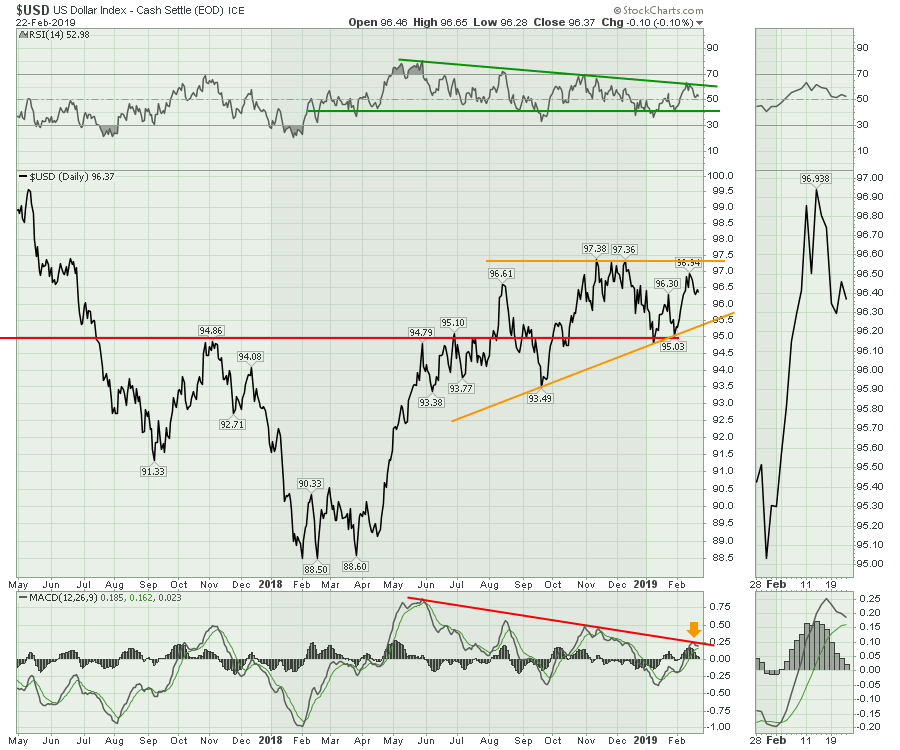 This is the Weekly Market Roundup for February 22nd, 2019. Sentiment still points to a continued rally. The Chinese market is surging as well, which is supportive of the rally continuing. 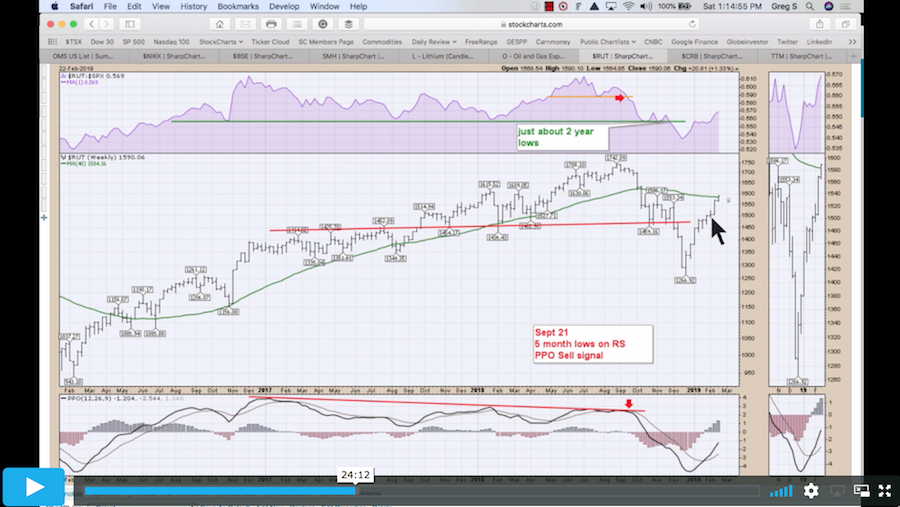 Lots to cover today. In the latest Canadian Technician video, I show some of the strongest stocks in the Canadian Oil and Gas exploration industry. You can watch below or at this link! 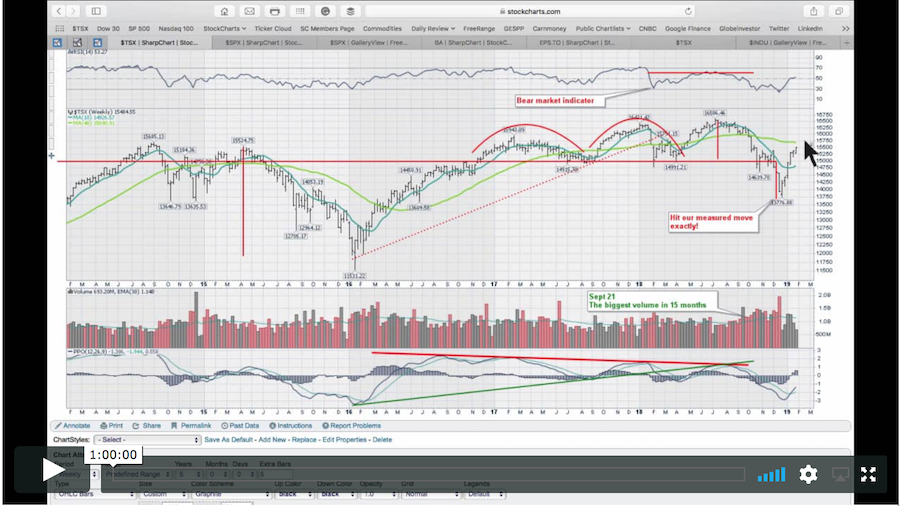 You can find the new Wednesday Edition of Market Buzz on the StockCharts TV YouTube channel. 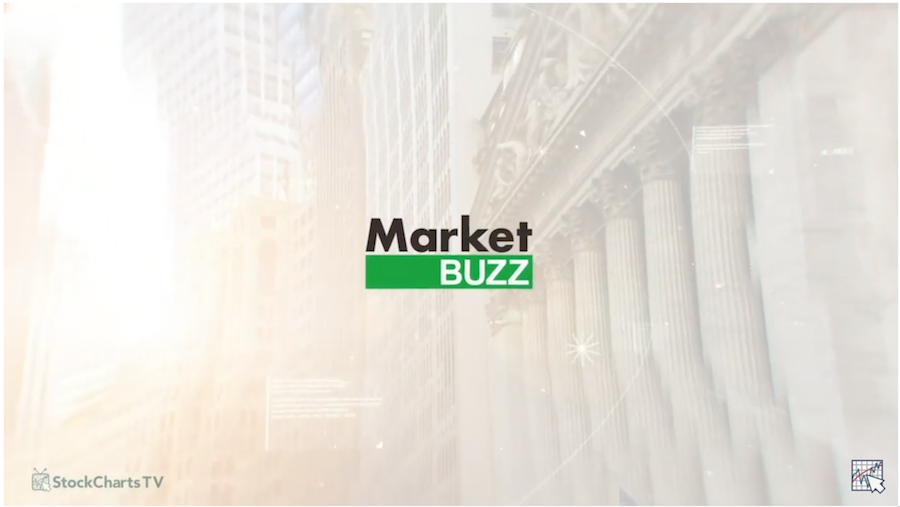