As we kick off the week, we must begin by noting that railroads are the hottest wheels around. They were rolling! CSX, CNI, UNP, NSC and KSU all hit new highs this month, while CP is just moments away. The fact that the industry group is just starting to surge above resistance suggests there are more gains coming into the space. 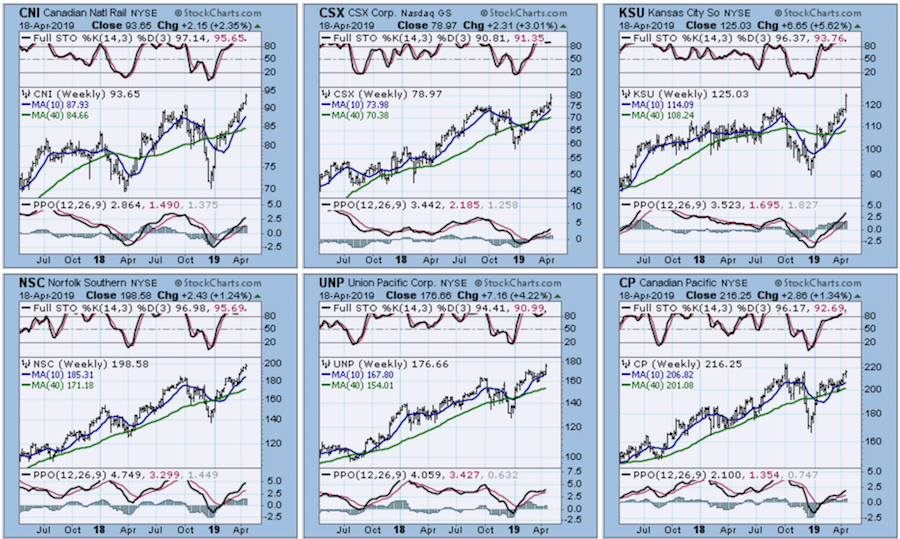 So, with good things rolling in for the transports, it looks like the Industrials are also going onto higher highs. 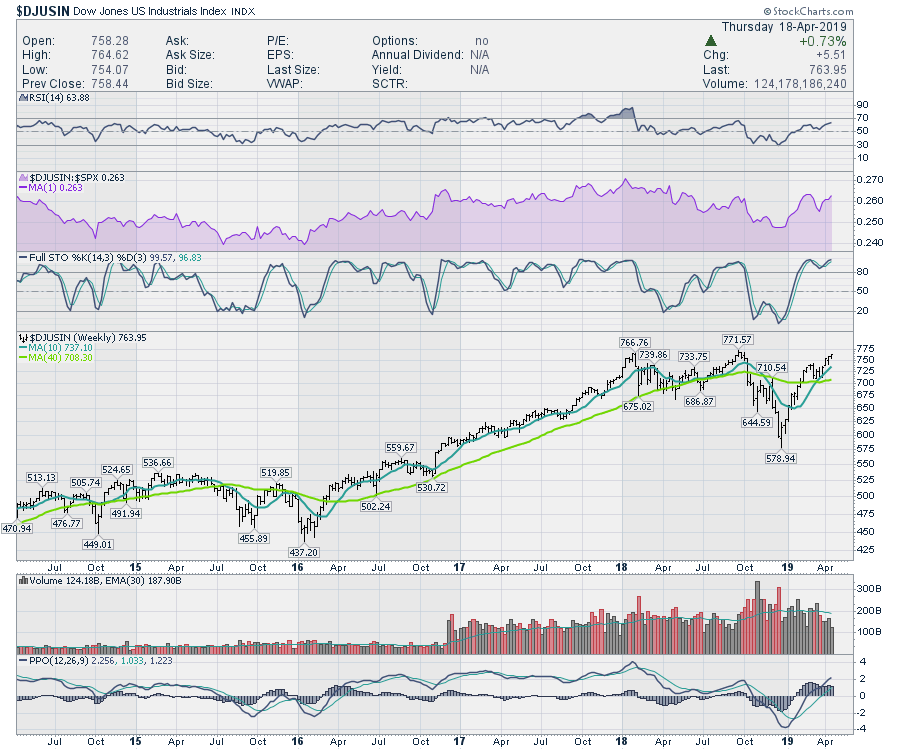 Financials broke a year-long downtrend this week, so it is an important time to check in on the industries. 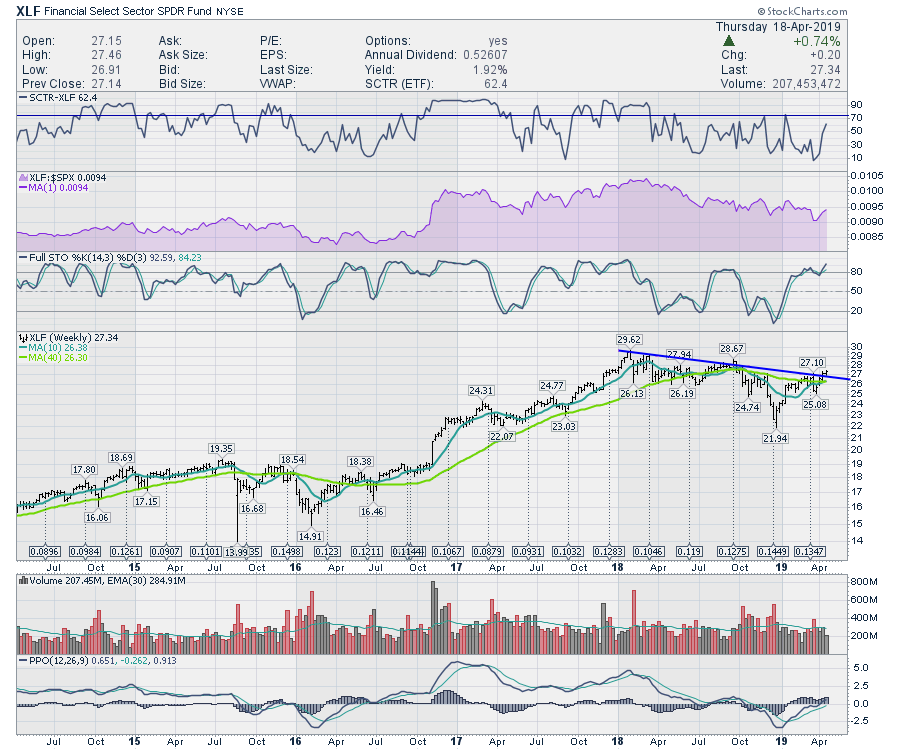 While some financials having been moving to new 52-week highs, lots of different industries within the financial sector are starting to pick up speed. Thus far in April, 74 financial stocks surging to new six-month highs. Looking across the different industry groups, asset managers like Blackstone and Blackrock have been building relative strength. The chart below of Blackstone (BX) shows a terrific impulse move jumping out of this $34-$36 resistance range. Volume piled in on a 4-day trading week. 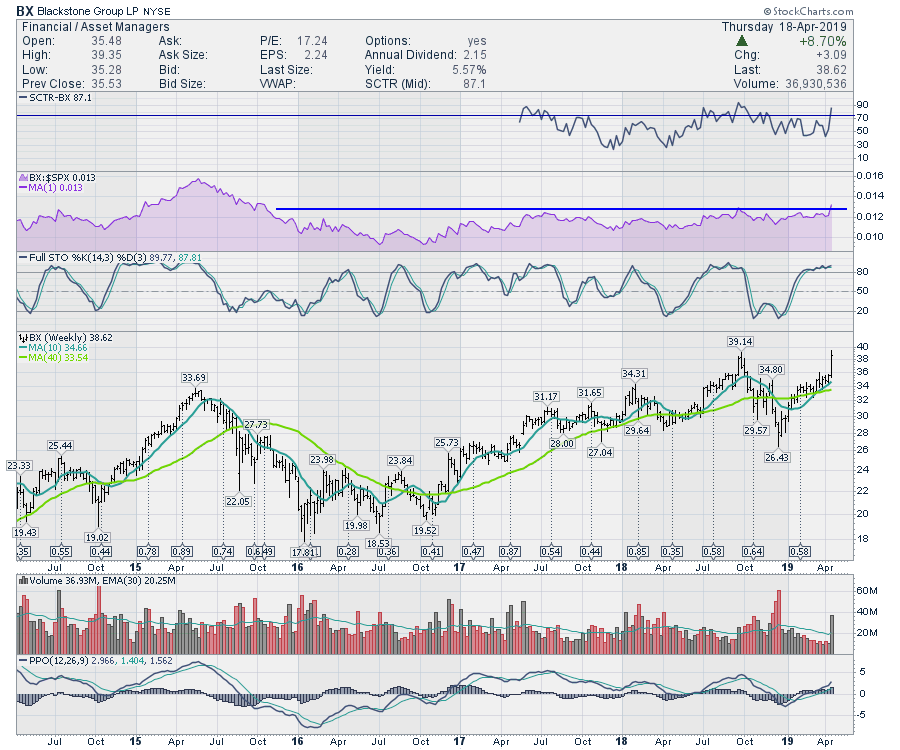 Blackrock (BLK) was the same, but a different chart shape with a $450 stock. The SCTR surged, the relative strength (in purple) hit new six-month highs and the full stochastic indicator surged to the top of the range. Price is poised above the 10-week and 40-week moving averages. The moving averages set up a bull market crossover, with the 10-week moving above the 40-week. That is bullish. Volume was slightly below average, but it was a 4-day week. The PPO momentum indicator is just moving into positive territory. Looking left on the chart, that marked a beautiful entry point last time. 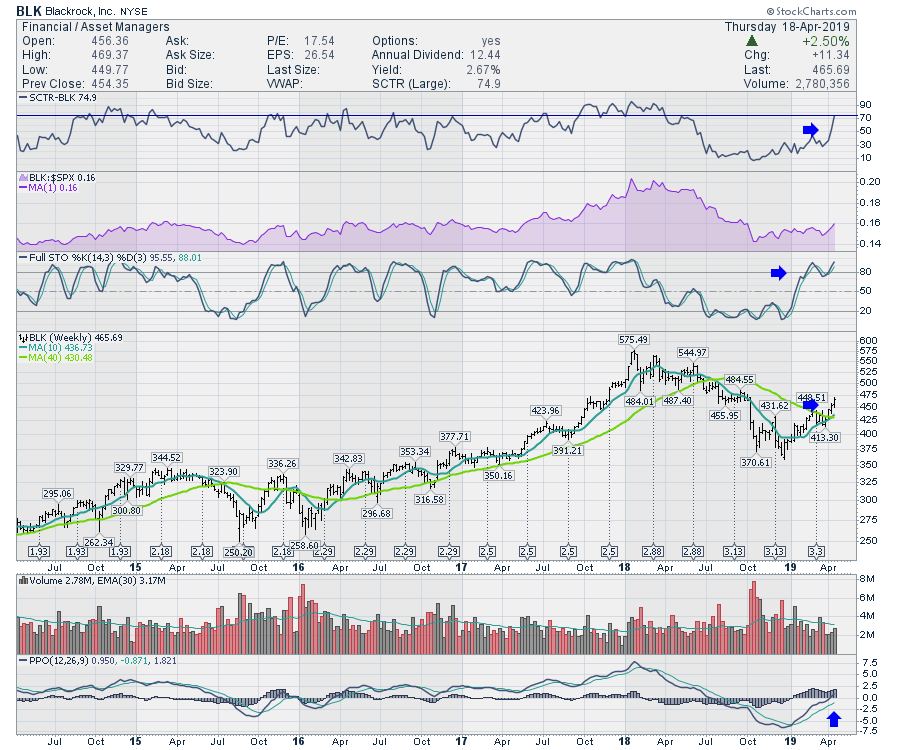 Commodities did not fare as well. This DBC chart below is a teachable moment to see for people looking at charts. Indicators like the full stochastic and the PPO look similar to the Blackrock chart above but this is why I have other indicators on the chart. There are important differences when we look at the SCTR and relative strength. First of all, the price action moving higher is so slow that the SCTR ranks this movement in the bottom 10% of all the US ETFs. DBC is also underperforming the $SPX, as the purple area chart is declining. If we look in on the price, it is up slightly more than 13% off of the lows, which is roughly half of what the $SPX-tracking ETF (SPY) is up if you just invested in the index (25%). 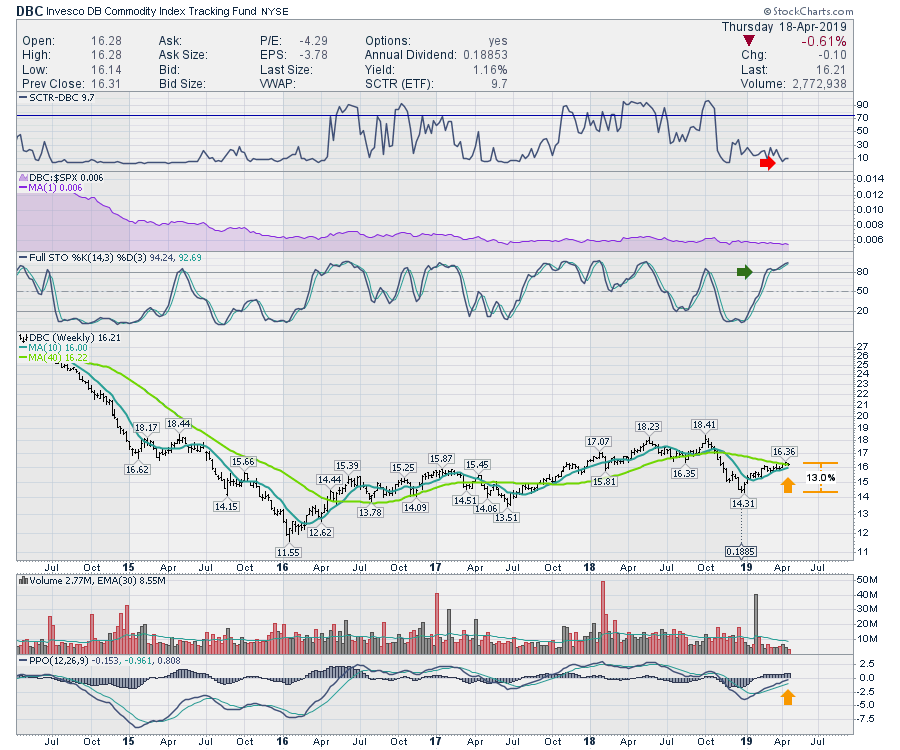 With severe underperformance, commodities continue to be in a rut. While crude oil is higher, crude-related stocks have not followed. Copper has been sideways for two months and only had a couple of big weeks since the lows. Copper made higher highs and higher lows this week, but closed near the low of the range. That leaves two big selling tails sticking up on the chart above $2.95. That contrasts with rising lows that are positive. Looks like more sitting and waiting ahead for Copper. 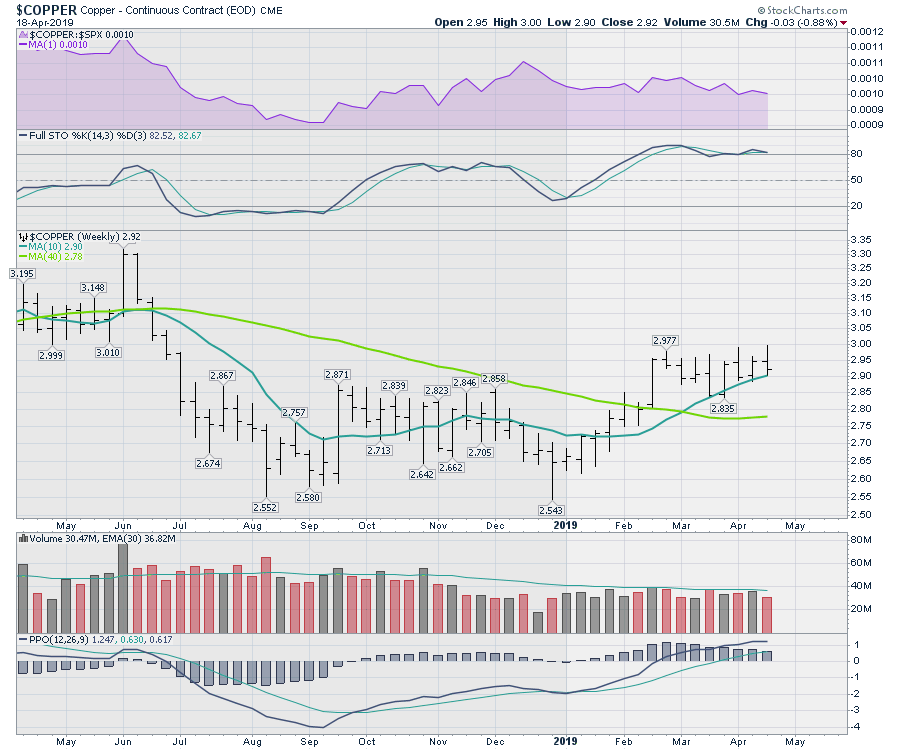 Most of the commodities covered in this week's Market Roundup video were down. Gold is really weak and the price of oil is holding. 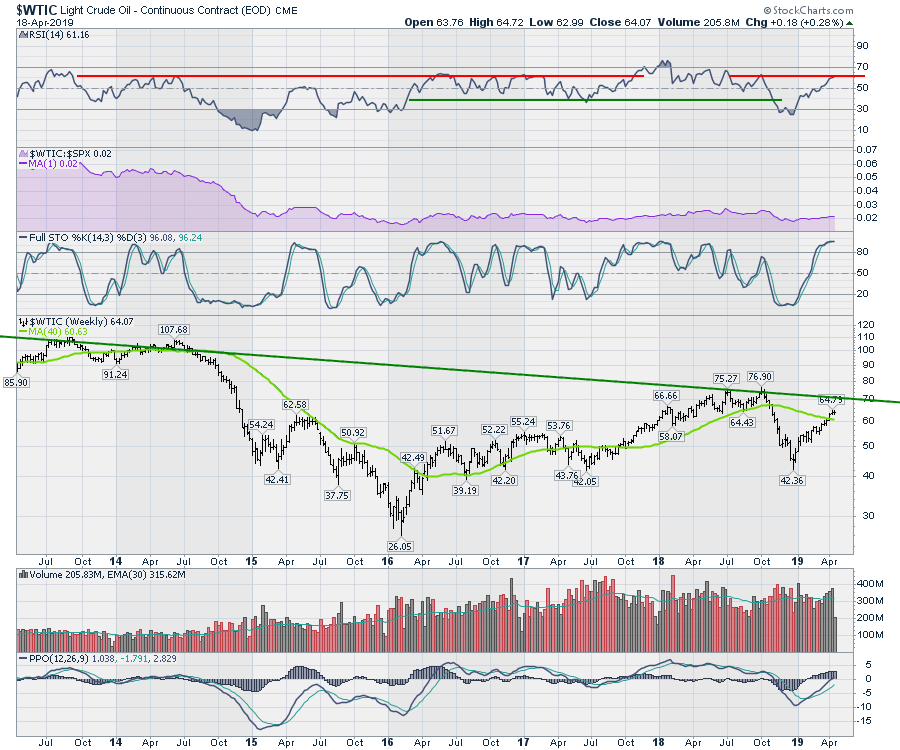 Agricultural commodities like corn, soybean and wheat were down. It all seems to be waiting for a final resolution of the US Dollar, which had a strong week and closed on the highs. 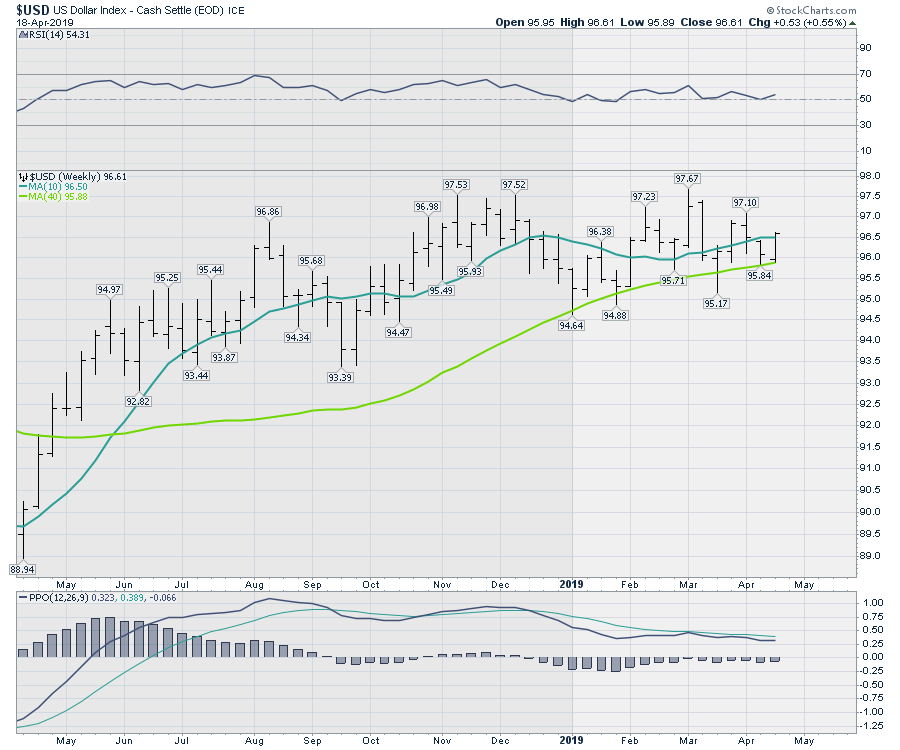 Here is a link to the Market Roundup for the week. The foreign markets are pushing to new highs above the 40-week moving average, so my market bias is higher as stock market indexes globally push higher. 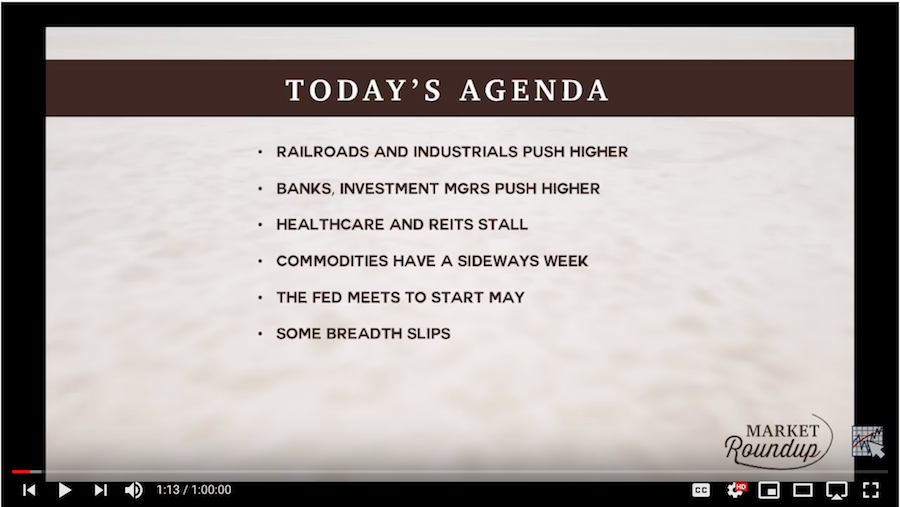