Relative strength or price relative charts provide an idea of which sectors will lead and lag over the next few weeks and months. These are formed by dividing the Sector Index by the Wilshire 5000 or another broad market index. These particular four sectors are positioned according to the place in an economic expansion in which they perform best. Techs and Transports are supposed to perform best during the early expansion phase, while Basic Materials and Energy perform best in the late expansion phase.

Sector performance suggests that we are in the late phase of an economic expansion. Techs are starting to weaken as the price relative broke below its trendline and Transports have totally fallen apart. The two standout performers are Energy and Basic Materials. Relative to the Wilshire 5000, the Energy SPDR (XLE) broke above resistance in December and continues to  forge new highs. The price relative for the Basic Materials SPDR (XLB) fell earlier this year, but bounced in February and remains in an uptrend. 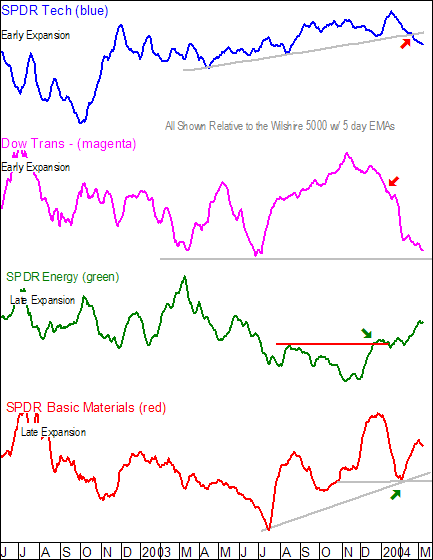