The stock market environment over the past six weeks has been fraught with a good deal of rotation out of specific indices such as the Dow and Nasdaq and into the S&P 400 midcaps and S&P 600 small caps. And it is precisely this rotation effect that we believe is developing in the weeks and months ahead between the Consumer Discretionary shares (XLY) and Consumer Staples shares (XLP).

In essence, the relationship between these two is a "signal" into investor confidence regarding spending patterns - a high ratio such as at 1.40 or above current levels mind you - indicates a belief stronger spending patterns are going to continue. However, we believe that given debt the incremental stimulus amount is likely to fall in the future means a "reversion" towards the mean will develop. Our target for this is the longer-term 200-week moving average which implies the recent decline off the highs is part and parcel of the first leg lower. Hence, we would be buyers of consumer staples and sellers of consumer discretionary and in some cases becoming outright short of discretionary shares - in particular several retailers. 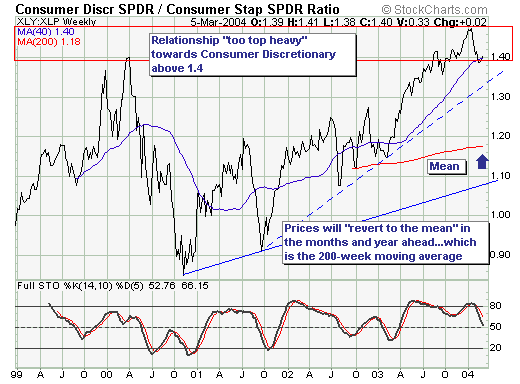