The weakness over the past several months is stark, which was made "more so" over the past two-day decline in all the major indices due to rising energy prices as well as a "punk" employment report. As a consequence of each of reports (and others) - our presumption is for consumer spending to remain weak in the weeks and months ahead...perhaps progressively becoming worse.

To understand this somewhat better, we turn to a very broad sector ratio we like to use - Consumer Discretionary (XLY) vs. Consumer Staples or (XLP). It goes without saying that if consumer spending is likely to weaken further, then consumer discretionary shares will weaken relative to the more necessary consumer staple shares. In fact, this has been occurring, but at still remains at historically high levels above 1.35. However, the emerging consolidation pattern below trendline resistance and the 40-week moving average argues for a new leg lower to have begun. If this is the case, then a move lower towards the 200-week moving average would be expected.

Hence, once again - it time to sell discretionary shares vs. staple shares, but remember...if a bear market has begun, then all shares are likely to decline...only the defensive staples shares will drop as quickly. 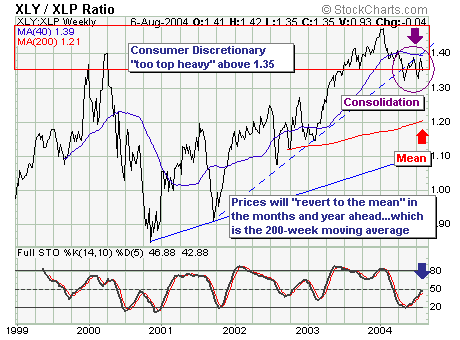