The major markets sold off dramatically at the end of the week due, so we are told, to wild speculation in the oil market. The Dow closed at 9815 which is significant because it is less that the 9852 low that it set back in May. This is the "lower low" level that I pointed out in our last edition. Despite all of the teeth gnashing in the financial press, nothing has really changed - yet. The markets are in a downtrend and lower-lows are to be expected. If the current pattern holds, the Dow may bounce some next week, but be prepared for more new lows before its next significant rise.

All our analysts are bearish these days (something that contrarians love BTW!). After I go over John Murphy's "4th Law of Technical Trading", John looks at the real reasons behind this week's fall, Richard sees a rough road ahead for consumer spending, Carl looks at the Oil market, and Arthur Hill examines the A-D lines of popular ETFs.

LAW #4: KNOW HOW FAR TO BACKTRACK

To create a percentage retracement level, measure the most recent significant move that the stock made - i.e. the distance from the top of the last important "peak" on the chart to the last important "trough" on the chart. Now, mentally consider that distance to be "100%". By multiplying that number by the appropriate percentage, you can determine where these new "invented" support/resistance levels are.

For instance, as John indicates, stocks often reverse at the 50% retracement level. Thus, you'd multiple the distance you measured above by 0.50 (50% - the same as dividing by 2) to determine how far the stock would need to move (from the previous peak or trough) to hit that retracement level.

If that sounds like a bunch of needless math to you, you're right! And you're in luck - StockCharts' ChartNotes annotation tool can do most of the work for you quickly and easily. Start by creating a SharpChart of the stock you are interested in, then click on the "Annotate" link located just below the chart. In a couple of seconds, our Java-based annotation tool (which we call "ChartNotes") should appear with your chart loaded up and ready. It should look something like this: 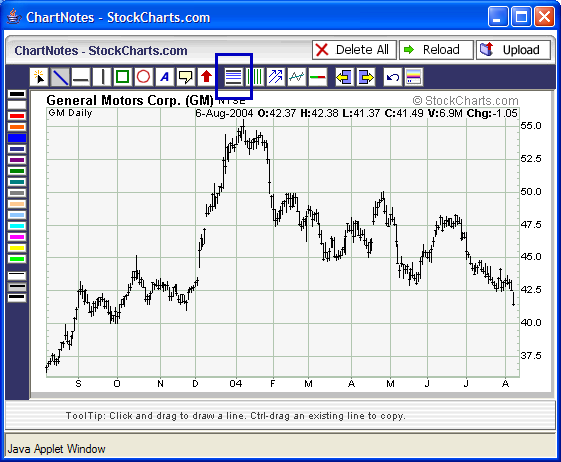 To study retracements, first click once on the "Fibo Retracement" tool from the top toolbar (marked with a blue square). Next, move your mouse to the previous significant peak or trough (on the GM chart above, let's study the big move in December 2003). Then, click and hold down your mouse button while dragging the pointer to the next significant trough or peak. As you drag, we automatically display the important retracement levels and their values. When you have your mouse in the proper place, simply lift up on the button to finalize things. You should see something like this:

(Note: To duplicate this exactly, you'll need to move your mouse horizontally to the right edge and then use the "Expand Right" tool a couple of times.)

Now, why do retracement levels work at all? What's the "magic" behind them? The magic is the natural human tendency to worry. For example, after a stock has risen for a while, it's natural that some of its stockholders will start to get nervous and start thinking about "locking in" their profits (i.e., selling). The point at which that actually happens is different for each individual shareholder, but statistically, shareholders act on those nervous feelings in three clusters - one around 38%, one around 50% and one around 62%.

In the case of the GM move last December, notice how many of the investors later "locked in their profits" (i.e. "gave up") around the 38.2% and 50% retracement levels of that big move (red arrows).

Retracement analysis lets you and I take advantage of this natural nervousness in others.