DROP IN BOND YIELDS HURTS DOLLAR, HELPS GOLD... Bond prices surged on Friday's weak job report. As a result, the yield on the 10-Year Treasury note tumbled to a four-month low and ended below its 200-day moving average (Chart 1). The sharp drop in U.S. rates pushed the dollar into a 2% decline. Chart 2 shows the dollar failing at its March high and ending under its 200-day line as well. The drop in the dollar pushed gold $7.30 higher and back over $400. Gold is also back over its 200-day average. That made gold stocks one of Friday's few winners. [The only other winners were rate-sensitive homebuilders and utilities]. 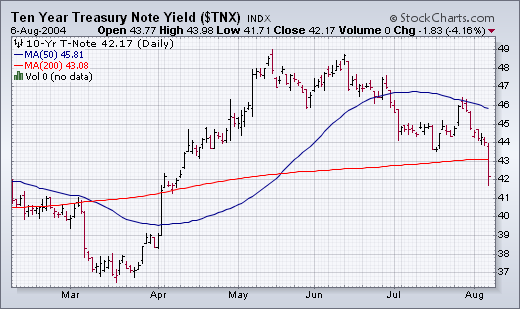 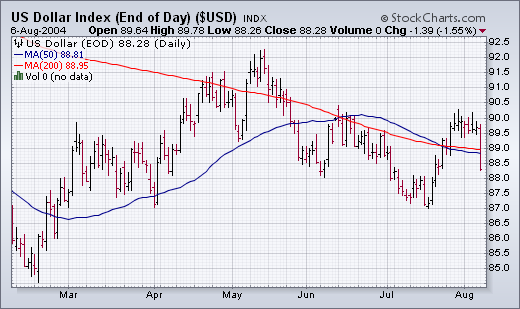 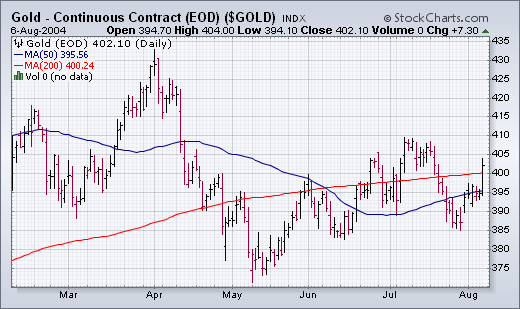 EARLY 2004 SECTOR ROTATION WARNINGS... In my Thursday update, I chastised economists for missing the threat from rising oil prices earlier in the year, and made reference to earlier warnings that I had published on the subject. I thought it might be useful to list a few of those earlier messages, which discuss early sector rotation warnings. Two themes you will see repeated over and over is that leadership by energy stocks and underperformance by technology is a bad combination for the market. I've repeated those same warnings in recent messages. Those negative signs were written about as early as January and February. You can access those Market Messages by clicking on "More Archived Updates" in my Market Message section: --January 27: "Loss of Leadership From SOX Index May Be Bad Omen for Nasdaq" --January 29: "Tech Continues to Lead Market Lower -- Market Rotates to Consumer Staples" --February 4: "Loss of Nasdaq Leadership Could be Bad for Market" --February 10: "Rising Oil Is A Threat to Market" --March 10: "Sector Rotations Are Similar to Spring of 2000 -- Why Energy and Consumer Staple Leadership Isn't Good"