Last week's market rally was impressive to be sure. Now, the question whether the decline off the early January highs are in fact intermediate-higher or more short-term in nature. Previously, we postulated the monthly key reversals' in the major indices put them in a position to decline further; however, that isn't clear any longer. In fact, the S&P 500/Nasdaq Composite Ratio is now testing the critical 125-dma trading signal' we use; if prices breakout above it then technology shares are expected to underperform . But, given the 40-day stochastic is overboughtthen the probability favors a turn lower.

CONCLUSION: The probability is increasing that a larger technology leg higher has now begun. Thus, an aggressive long trade would be the semiconductor sector' given their recent strength. 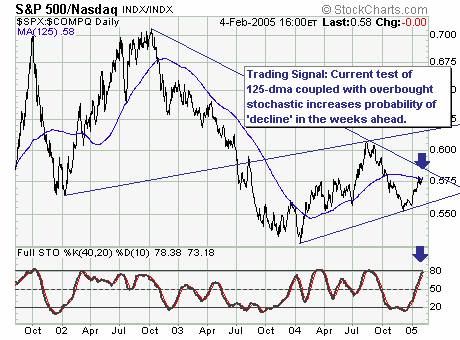