Most of the major market averages closed in the red today, but only marginally. After trading down most of the day, the S&P 500 closed with a loss of less than a point. The S&P also held at its late February low at 1184. While the price action was relatively tame, volume was heavy. Don't pay too much attention to that however. Friday was a triple witching day which often produces heavier trading. The S&P also underwent some "rebalancing" in its stock weightings to ensure that only publicly traded shares are counted in a stock's capitalization. That means that some shares will have a bigger weighting and others a smaller. That also contributed to today's heavy volume. I wouldn't read much into it or today's price action. Despite today's late bounce, the market still looks toppy to me for reasons that I've already spelled out in previous messages. 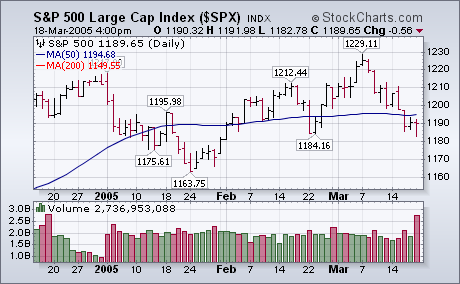