This is clearly a show of strength, not weakness. Upside momentum may not be as strong as it used to be, but the breakout in the Dow Industrials is bullish until proven otherwise. The move signals a continuation of the January advance and next resistance is around 11,400. Of note, the Dow Industrials was turned back at 11,400 in Apr-00, Sep-00 and May-01. This is a formidable area. The breakout at 10,900 becomes support and this is the first level to watch for signs of failure. A move below 10,900 would be negative and further weakness below the January low would be outright bearish. Should the Dow fail around 11000 and break below 10,900, a potentially bearish broadening formation would come into play (gray trendline extensions). Let's cross that bridge when and if it gets here. 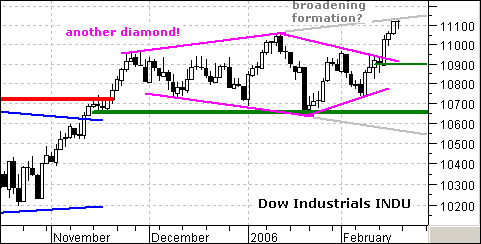 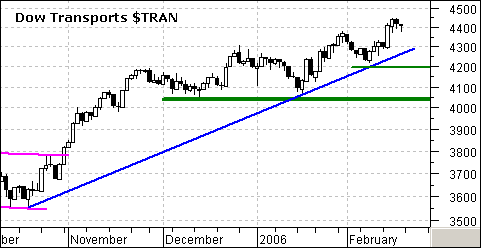