The May Swoon as we are apt to call weakness seen during the month had led to an increase in confusion amongst technical analysts. However, we would argue that is all about "time horizons", and we should confuse short-term movements with long-term time horizons as we are beginning to see. In fact, our short-term indicators and models have traded to their lowest points in months; however our longer-term work has just begun to weaken. Everyone is conditioned to buy the dips, and those that haven't have paid the price. Hence, we think the market is well seasoned for a larger sell-off from a longer-term perspective.

Let's keep it simple and take a long-term viewpoint; May's trade formed a bearish "key reversal" lower in many of the industrialized as well as emerging market indices (we have shown the S&P 500 as it is likely to outperform during any decline). Thus, if we use this bearish formation as our starting point – the probability of a correction towards the rising major 40-month moving average support at 1145 has increased significantly. This would complete a normal -10% correction, and actually cause no harm to the bull market in stocks. However, if prices break through 1445, then a clear bear market will have begun. 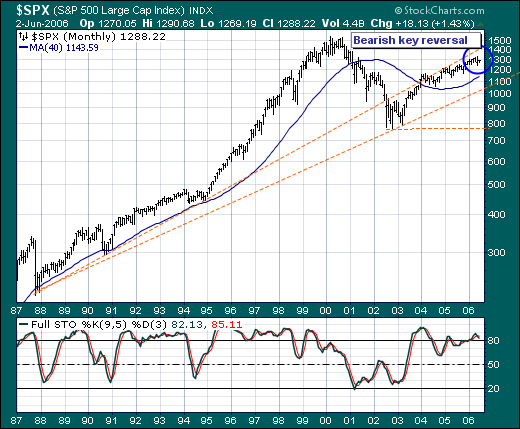 Therefore, from a tactical perspective - market strength such as that seen this week should be sold and/or sold short given the 40-month moving average target...allowing for a slight monthly rise. Our favorite market indices to short: short small and mid cap stocks as well as emerging market ETFs.