CATERPILLAR HURT BY WEAK HOUSING ... A plunge in Caterpillar on Friday, Oct 20th, unsettled the market. And for good reason. The bad news from the stock was blamed on a weak housing sector. Why that's worth noting is because Wall Street seems to be dismissing the housing meltdown as not very important. I beg to differ. There are subtle signs beneath the surface that weak housing is having a negative impact on parts of the market tied to the economy. Chart 1 attempts to show a positive correlation between Caterpillar (green line) and the PHLX Housing Index (brown line) since the bull market started four years ago. Both turned up together at the start of 2003 (green circle) and rallied together until the end of 2005. Notice that the plunge in housing stocks at the start of this year was followed shortly by a downturn in Caterpillar (red circle). That weak action isn't limited to CAT. It's generally true of most stocks tied to the economy. 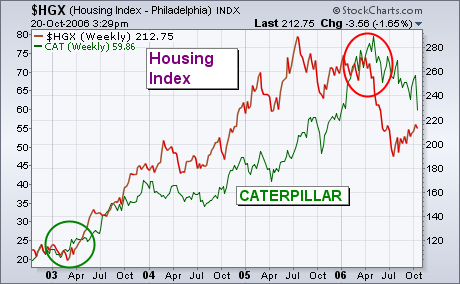 WEAK HOUSING IS HURTING CYCLICAL STOCKS... The brown line in Chart 2 is the Housing Index (HGX). The blue line is a ratio of the Morgan Stanley Cyclical Index (CYC) divided by the S&P 500. The chart shows that economically-sensitive stocks have done much worse than the S&P 500 since May and shortly after the peak in housing. Cyclical stocks are very closely tied to the economy. The fact that they're doing so badly suggests that the market is already preparing itself for an economic slowdown resulting from the weak housing sector. It's no concidence either that some of the market's strongest groups have been in the defensive sector. I wrote yesterday about strength in healthcare and utilities. Another group that usually benefits when cyclicals (and the economy) weaken is consumer staples. 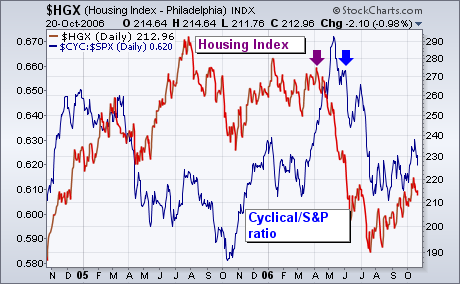