Hopefully the start of 2007 finds you more prosperous than you were at the start of 2006. That's always the goal and, given the performance of the major averages during 2006, it looks like many people achieved it.

Basically, everything was up about 17% for the year except the Nasdaq which had a flat start and then was overly punished during a big drop in mid-May. The Amex had the most "interesting" journey through the year as its oil-heavy nature caused it to outperform everything else during the middle of the year.

So, what's up for the start of 2007? Well, the current technical word for the markets is "overbought". A strong, long rally has pushed most technical indicators into overbought readings. This chart of the Dow shows the situation clearly: 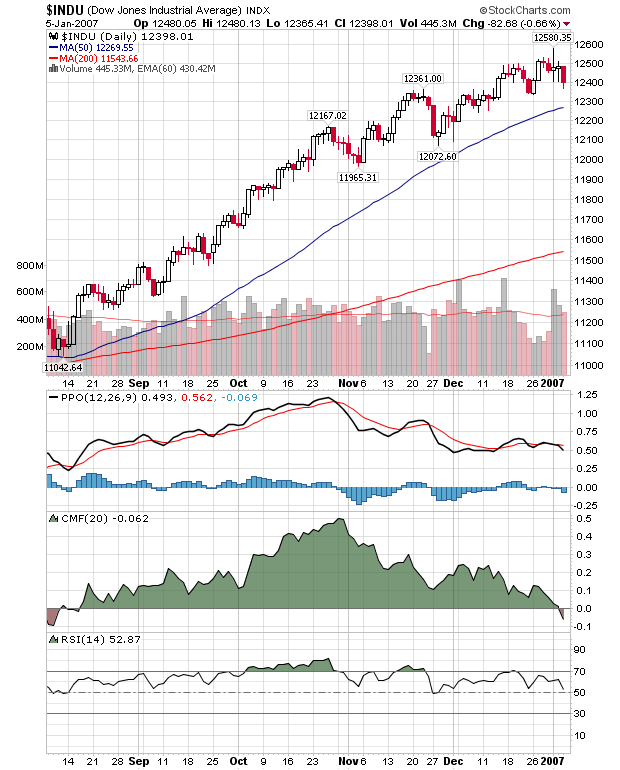 As I have said on many occasions, the Chaiken Money Flow (CMF) is one of my favorite "quick" indicators because it combines price action with volume action and gives very clear signals. The fact that the CMF recently went from positive to negative territory should not be ignored. With the MACD and the RSI both moving lower as well, caution is indicated.

WHAT TO EXPECT FROM STOCKCHARTS IN 2007

2006 was another great year for StockCharts.com. We set records for revenue, subscribership, charts served, ticker symbols followed, and just about every other category you can think of. Key accomplishments include the successful launch of SharpCharts2 back in May, our first charting contest, improved Google-based site searches, a new wiki-based ChartSchool, a 40% increase in our bandwidth capacity and the installation of a completely redesigned server facility.

2006 also saw us reinvest more money into our technical infrastructure than ever before. We continue to improve our ability to serve high-quality charts quickly and consistantly to all corners of the globe.

So, what's up for 2007? In two words: Scans and Favorites. While we will continue to improve all areas of the site, our key developers hope to focus on making significant improvements to our Scan Engine and to our Favorites management tools this year. Stay tuned for more details on our progress in the coming months!