The Internet HOLDRS (HHH) started 2007 with strong move on good volume, but the ETF was knocked back on Friday and remains just short of breakout. Follow through is the key.

The Internet HOLDRS (HHH) formed a falling flag/wedge over the last six weeks. These are typical for mild corrections, but the correction is not over until there is a breakout. This week's surge carried HHH to the upper trendline and follow through above the December high at 55 would be most bullish. I would also like to see expanding volume for confirmation. Also note that Google (GOOG), Yahoo! (YHOO) and Ebay (EBAY) have similar patterns working and Yahoo! is taking the lead.

The January surge reinforces support at 52. There are a number of reasons for support at 52. First, HHH broke above the 200-day moving average in early November and this moving average now becomes support around 52. Second, the August trendline extends up to around 52 in early January and has been touched at least three times. Third, there is a small consolidation in late October and early November that argues for some support around 52 (gray oval). Failure to hold the early January gains and a move below the January low at 51.93 would be bearish for HHH. 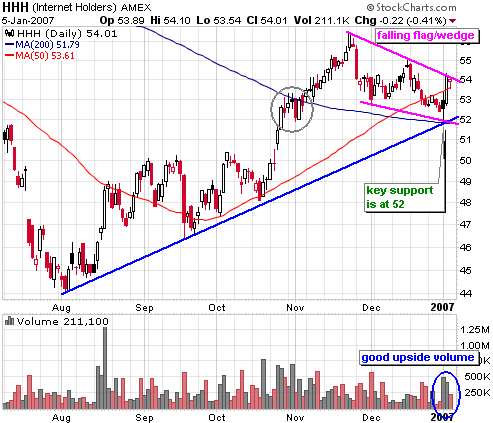