Today we want to look at a "pairs trade" theme we think has good fundamental and technical merit; it is a "long energy/short consumer discretionary shares" trade. Recently, we have begun to put this trade on in various ways; and one that we intend on adding to as it becomes more profitable. From a technical perspective, we use the S&P Energy and S&P Consumer Discretionary ratio (XLE/XLY) as our guide. As we look at the chart, we note that over the course of the past year, the ratio has been in a steady if not relentless decline. However, this decline has taken the ratio from overbought levels to oversold levels, and more importantly...into several major long-term support levels. We believe those support levels will hold; and obviously turn the ratio higher. Hence, one is to be long XLE and short XLY. We also have the trade on using long positions in Weatherford Int'l (WFT) and Peabody Energy (BTU); whilst being short Ryland Homes (RYL) and CarMax (KMX). As time moves forward and the trade becomes more engrained, we intend on fine-tuning the trade via swapping out these stocks for those that have greater potential; we want the most out the trade, for it is one that the "hedge and mutual funds" have taken the other side of. The rush to the exit will be quick; it will be fierce...and we will add to the trade as it occurs. 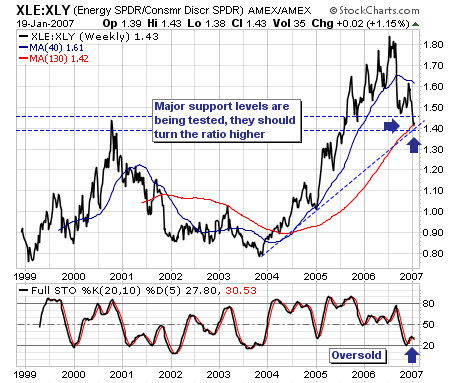