Thursday's 4.5% drop in Chinese stocks caused nervous selling in other Asian markets. By the time the U.S. market opened, however, Europe had already started to recover and initial U.S. losses were modest. By day's end, the Dow had closed at a new record high. A strong Friday open in Asian markets set the stage for a strong day in global stock markets. Chart 1 is an hourly bar chart of the last ten days. It shows the Pacific Ex-Japan iShares (EPP) gapping down on Thursday (red arrow). The good news is that the EPP then gapped back up on Friday (green arrow). Thursday's isolated price bars (see circle) created an "island" bottom which is a short-term bullish pattern. [An ""island"" bottom occurs when a "down gap" is immediately followed by an "up gap"]. The U.S. market also got a big boost from large industrials like Caterpillar and Honeywell which led the Dow Industrials to a new record high. A big jump in Google pushed the Nasdaq up against its 2007 highs. Commodity markets like gold and oil that pulled back on Thursday (owing to concerns about higher Chinese interest rates) recovered strongly on Friday. Commodity-related stocks – like basic materials, energy, and precious metals – were among Friday's strongest groups. A weaker dollar is continuing to feed the commodity rally. 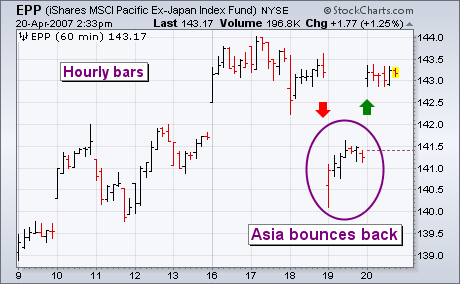