The positive stock market rally is undergoing significant "rotation" within various indices, which in our opinion is quite important from both an investment and trading perspective. First, when we invest or trade, we want to run with the "fastest horses" in order to outperform the markets or one's particular benchmark. Therefore, it behests us to use technical analysis on specific ratio charts to discern where to put our money in order to earn outsized profits. This is relative investing 101. Last week, we will note that the large caps handily outperformed the small caps. This is a trend that has been ongoing for the past year, but one that hasn't really gotten the attention of the hedge funds and hot money. Well, that is about to change, and the media will begin to pick up on this material change and it shall have repurcussions throughout the trading world. If we analyze the ratio chart between the S&P 500 Large Caps (SPY) and the Russell 2000 Small Caps (IWM), we find a "major low" was forged in April-2006, and since then the ratio has held above its low and formed what appears to be a "right shoulder" of a larger "head & shoulders bottoming pattern." This is of course hugely bullish, for it portends months and years of outperformance by the large caps such as Wal-Mart (WMT), Citigroup (C), 3M (MMM) and Pfizer (PFE). 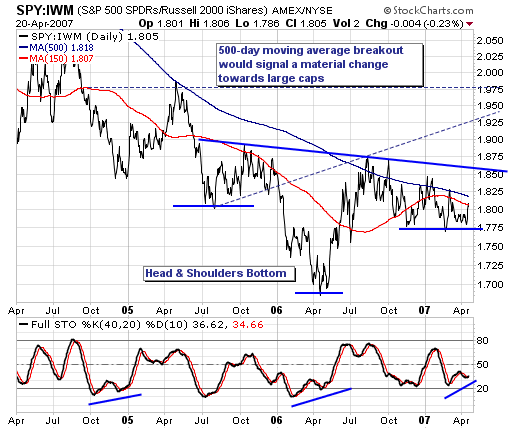 For this bullish pattern to be confirmed, a move above neckline resistance at 1.86 is required; however, we would become more confident a breakout is developing with a breakout above the longer-term 500-day moving average. The 40-day stochastic is showing strength from a higher low, which further increases the probability this bullish pattern will come to fruition. In other words, the ducks are lining up rather nicely.

And finally, we would also note that SPY isn't only poised to outperform IWM; it showing bullish technical patterns against European and Asian regional indices...and perhaps more importantly...the Emerging Markets. Hence, when we are long - we want to be long large caps; when we are short - we want to be short small caps and certain foreign regions or indices. It's just that simple right now.