The Dow Diamonds (DIA) moved to a new all time high this past week and the S&P 500 ETF (SPY) recorded a multi-year high. En route to these highs, both exceeded their late February highs and large-caps are showing relative strength. In addition, both gapped higher on Monday and held these gaps throughout the week.

On the other side of the market, the Russell 2000 iShares (IWM) is having trouble with resistance from the late February high and small-caps are showing relative weakness. The ETF also pulled back rather sharply on Thursday and actually filled Monday's gap. IWM bounced back on Friday, but remains at resistance and has yet to breakout. The price relative (IWM:SPY) further confirms that IWM is not as strong as SPY. The indicator has been overlaid the IWM chart and it formed a lower high in April. 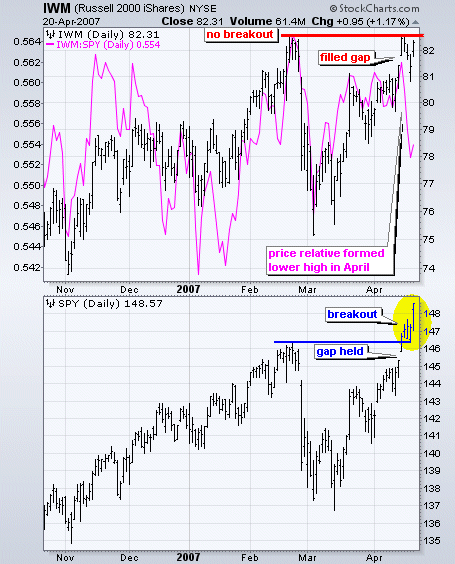 IWM is close to a breakout and a move above the February high would affirm the breakouts in SPY and DIA. Failure to breakout would show continued weakness and this would cast a shadow on the current rally. At the very least, relative weakness in IWM means we should favor large-caps over small-caps in the coming weeks and months.