The Nasdaq rally continued into its fourth week with a gap up on Tuesday and move into the late February gap zone. This late February gap started a sharp decline to the March lows and the recovery back above 2460 is quite impressive. Even though volume is not so impressive, the current swing is clearly up and we should at least respect this up swing until it is proven otherwise.

Just what would it take to reverse the current upswing? I am watching three items: Tuesday's gap, the late March lows and RSI. The Nasdaq gapped higher on Tuesday morning, closed strong on Tuesday and continued higher the next two days. This follow through is bullish and the gap is bullish as long as it holds. The index established support around 2400 with three indecisive candlesticks (blue oval). A move below Tuesday's gap and below the late March low would reverse the current upswing. Until these are broken, the bulls have a clear edge and we should expect higher prices. 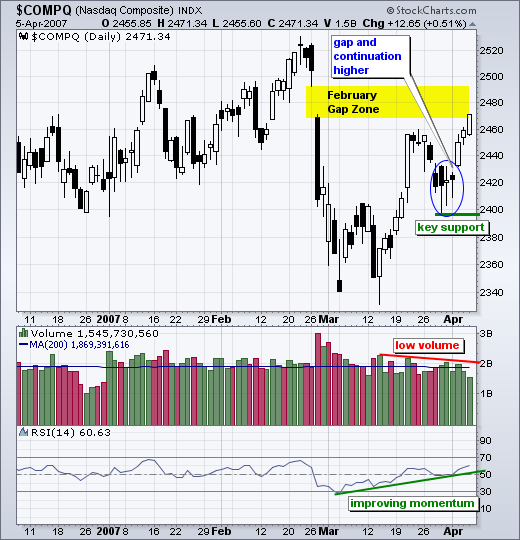 RSI is trending higher and above 50. RSI turned oversold in early March and moved above 50 over the last few weeks. I drew a trendline extending up from the March low and RSI is also trending higher. Momentum continues to improve and this is also bullish. A break below this trendline and a move below 45 in RSI would reverse the uptrend in momentum. The bulls also have the momentum edge and we should not bet on lower prices until a bearish signal.