Last week's stock market correction was rather "brutal" to be sure; however, we believe that the balance of evidence suggests at this time it is nothing more than a correction and more likely a consolidation to higher highs. If this is so, then we want to be long those stocks that shall "lead" the market higher. At this juncture, our models and analysis argues that using current weakness in the semiconductor sector to accumulate shares will provide outsized gains in the months ahead.

Looking at the daily chart of the Semiconductor Index ($SOX), we find a rather longer-term, large and clear bullish pennant consolidation has formed. Of course the ultimate resolution should obviously be higher; and if we use the percentage measurement of the Oct-2002 to Jan-2004 rally added to the July-2006 low – then we arrive at rough reading of 1000 or nearly a 100% increase from current levels. We have a very hard time believing this given our skeptical nature, but this is simply a hard and fast technical measurement. In any case, moving average support has held, and a breakout above pennant resistance will likely lead to a "melt-up" of some degree given the large short position outstanding in the semiconductor sector and its relative "unattractiveness" over the past 4-years in which it has underperformed the S&P 500.

Every dog has its day they say; perhaps now it's the Semiconductors turn to bark. 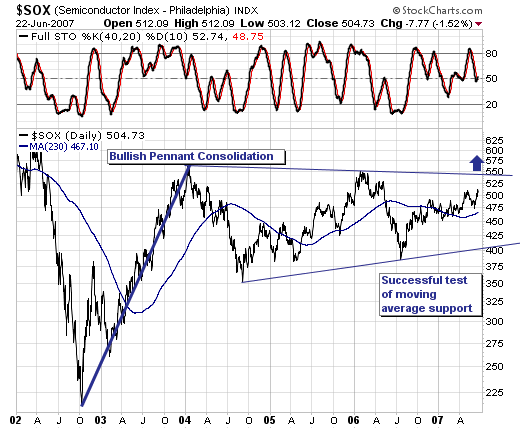