Things got a little bumpy last week as the Dow had a big "down" day on Thursday. Friday's recovery was reassuring, but was any lasting damage done? One of the best ways to examine the overall "health" of the Dow is to look at the total number of Dow stocks that are above or below their 50-day moving average.

StockCharts.com tracks that information closely via the $DOWA50 and $DOWA50R market indexes. $DOWA50 contains the actual number of stocks that are above their 50-day moving average. It is updated once a day after each market close. Because there are 30 Dow stocks, the value of $DOWA50 ranges from zero to 30. $DOWA50R is a percentage-based version of the same information - i.e., its value ranges from 0% to 100%. Use the "R" version when you want to compare this information to similar indexes for other markets (e.g., $SPXA50R).

Below is a great chart for you to use to examine the "internal health" of the Dow. 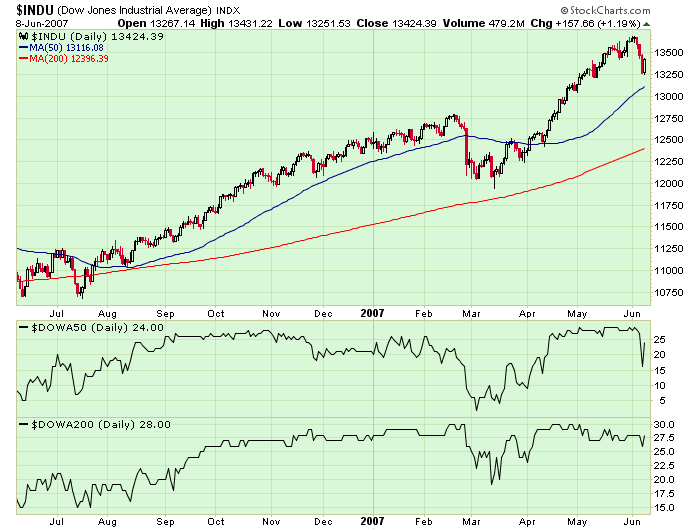 The most interesting thing this chart shows is the difference in behavior of the A50 line back in late February versus its behavior during the past week. Back in February, the Dow suffered a similar big decline in value, but in that case, the A50 line dropped significantly and continued to move lower. This past week, the Dow fell and then immediately recovered - so did the A50 line.

Remember that indexes like the Dow can move significantly for a number of different reasons - the A50 and A200 lines can help you determine the importance of those movements.