Last week was a treacherous week indeed, with stock prices falling universally. That said, one of the "weakest indices" was related to the US small cap arena, and specifically to the Russell 2000 Index ($RUT). In the past, RUT led the market higher, but that changed last year as a bottom was forged against the S&P 500; however, we now see sharp absolute weakness has caused RUT to breakdown below its 85-week exponential moving average. This moving average during the bull market from 2002 has provided an excellent "buying point" – especially given when the 14-week stochastic has fallen below 50. Unfortunately, that isn't the case at present, as Friday's weakness caused prices to break through this important moving average, which to us suggests a "bear market" in small caps is now confirmed, with further downside price action likely in the months ahead.

As a result, a reasonable "first target" is 670, which is another -10% lower from current levels. But in the fullness of time, we would expect the decline to find major support at the 50%-62% retracement of the entire bull market, which on a worst case basis would be -30% from current levels. Moreover, if the decline looks anything like the April-to-October 2002 decline, then we could very well obtain our "worst case scenario" by the end of this year. 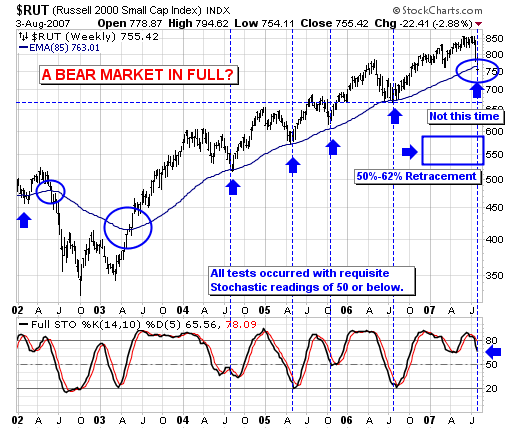