It's been a very long time, but we can now unequivocably say that we have an accommodating Fed. The lowering of interest rates was the next piece of our bullish jigsaw that fit perfectly. It's all coming together. The bond market knew it was coming. You just have to follow the technicals. Take a look at the weekly chart of the 10 year treasury yields over the past decade and a half. 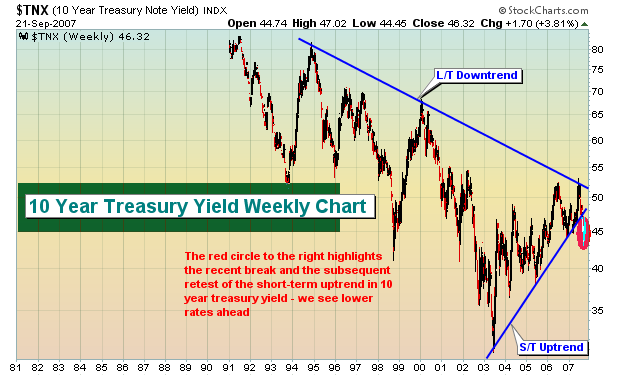 There is a long-term downtrend in rates that remains intact. The short-term uptrend that began in 2003 came to an end just before the recent Fed announcement. How long will we trend lower? That's a good question and a tough one. We expect the Fed will lower at least 1-2 more times and then re-evaluate our economic outlook. That would get the fed funds rate back down to the 4.00-4.25 area. From a technical perspective, we believe the yield on the 10 year treasury will ultimately drop to the 3.80-4.00% level. The economy should begin to grow more steadily late in the first half of 2008 and that may require the Fed to consider tightening again sometime in the second half of 2008 or early 2009.

Equities flourish in a growing economy with falling interest rates and little inflation. That is our forecast for the next 12 months and the primary reason we remain extremely optimistic and bullish. We have stated that the recent weakness was a buying opportunity as we expect equities to post very solid gains over the next 1-2 years. Focus on the large multinational growth companies found on the NASDAQ 100 for the balance of 2007, then be ready for a broad-based advance in 2008. Expect semiconductors to lead the rally into year end.