Buy-on-Rumor and Sell-on-News is a classic Wall Street axiom. In the internet heyday, Yahoo! would surge into its earnings announcement and then correct with a pullback near the actual announcement. The iShares 20+ Year Bond ETF (TLT) surged with the lead up to the Fed meeting on Tuesday and peaked a few days before the announcement. The rumor was the Fed cut and traders bought into this rumor in the second half of August. Traders took profits after the rate cut (news) was priced into the bond market. 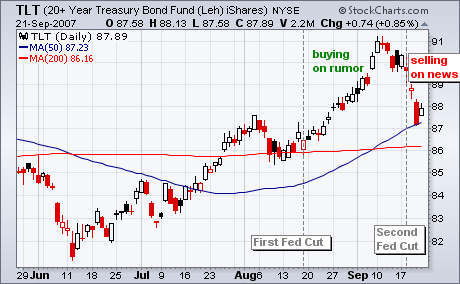 Despite the rather sharp pullback, the overall trend remain up and TLT finished the week in a support zone. The support zone stems from broken support, the 200-day moving average and the 50-day moving average. In addition, there is also support from the early August consolidation. A harami formed over the last two days with a long black candlestick and a smaller white candlestick (inside day). This shows sudden indecision and also indicates support. The overall trend remains up for TLT and I would expect the ETF to hold this support zone before continuing higher. 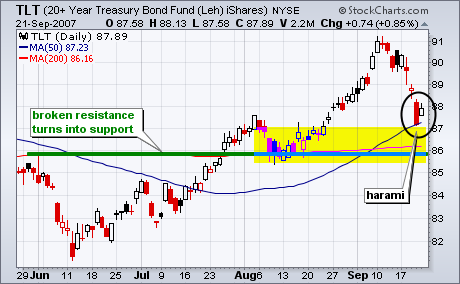