Over the past 18-months, the technology sector has outperformed the S&P 500 by a rather handy amount; however, we believe this trend towards technology out-performance is very close to ending. This has major implications in terms of "rotation" to be undertaken by mutual and hedge funds as they are currently very very overweight technology; hence a period of "de-leveraging" themselves may create an opportunity to be short the sector as the "doorway narrows" as everyone attempts to get out at the very same time.

Technically speaking, we use the ratio between the S&P 500 "Spyders" and the NASDAQ 100 "Q's" (SPY:QQQQ). As the chart illustrates, a larger trading range has formed over the past 5-years, with prices now hard upon support at the 2.85 level - which also happens to be right at Fibonacci 38.2% retracement level. This important and critical support level in our opinion shall "hold" and provide for a rally back towards both the short-term 60-day moving average as well as longer-term 250-day moving average... if not higher. Quite simply, prices are oversold when one looks at the 28-day RSI level of 30.91, which is attempting to form a positive divergence with prices.

The most recent experience with an oversold RSI positive divergence occurred in early-2000 - which of course was "the top" of the technology bubble, and right before the onset of a recession. While we don't necessarily believe an exact "redux" is likely - the risk-reward dynamic does indicate that the risk is towards higher ratio prices rather than a continuation towards lower prices. Hence, we 'smell' an opportunity to be short a number of technology names in the days and weeks ahead. 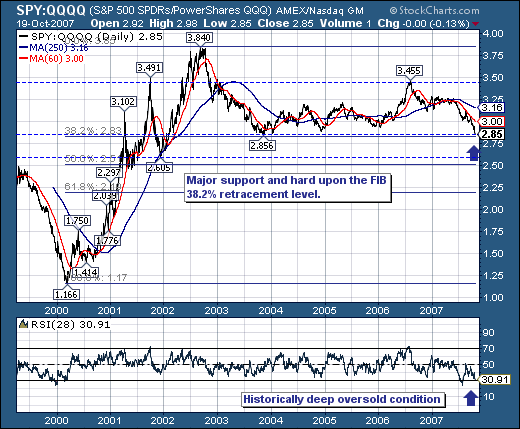