Earlier today I showed the Bank Index on the verge of hitting a new low for the year. By day's end, it had fallen to the lowest level in two years (Chart 1). This puts the BKX on track to challenge its 2005 low. In case you're wondering what that means, the BKX has fallen more than 20% from its early 2007 peak. That qualifies as an official bear market in bank stocks. That 5% daily drop helped make financials the day's weakest group. Consumer discretionary stocks came in second worst. Other large losers were small caps and transports. Those are the same market groups that have been lagging behind the rest of the market since mid-year. Although all sectors lost ground, groups that held up a bit better than the rest of market were healthcare, energy, industrials, utilities, and consumer staples. Bonds also had a strong day. 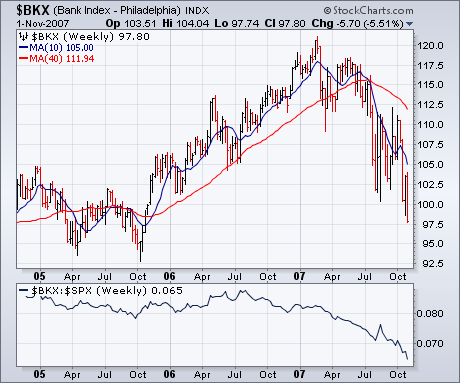