The bull market in commodity has extended beyond what many had believed it would in such a short period of time; be it crude oil prices or gold prices or even wheat prices - the bull market has surprised in its violence. The question before all traders and investors alike is whether the "risk-reward" of holding on to or adding to such positions is tenable. We don't believe it is in any of the aforementioned cases, but we'll only discus the gold market today, for it clearly has a "larger-than-life" following given it bottomed in earnest in 2001.

Quite simply, the rising gold market, and especially given its sharply rise over the past 6-years - has tended to increase the sponsorship of the metal from the engrained "gold bug base" to that of more main stream traders and investors. This is the manner in which bull markets evolve - they increase bull sentiment to the point where the contrarian point-of-view should be considered. We'll posit that point is "now", and while gold prices may very well have residual short-term upside remaining - it pales in comparison to an intermediate-term decline that could carry prices sharply lower from its current perch around $800/oz to somewhere near $600-$650. This wouldn't destroy or harm the bull market in any way whatsoever; however, it would bring sentiment back to more neutral levels upon which the bull market mete out the late longs and therefore can resume its upward trajectory to much higher levels.

Technically speaking, we find the distance above the 20-month moving average is at overbought levels and into trendline resistance that suggests the attendant "risk" is quite high; while potential "reward" is quite low. We need not understand any more than this from a technical perspective. Those who trade aggressively can "pick their places" in which to become short - for the backstop risk of the recent highs serves to limit losses. However, those preferring to "buy" at this juncture - we would simply say "wait", for there is little in the way of support until much lower levels at $675. For our money, we believe in "reversion to the mean", and ultimately in the next several years we are likely to see the 50-month moving average tested as it always it. The burning question is what level that test materializes? We'll further note this moving average is rising on average at $80/oz per year.

Therefore, while we like gold over the longer-term - we're looking for a sharp correction that will shake many late longs to the core. And once this happens - the gold market will be poised to rise farther and further than anyone now believes possible. 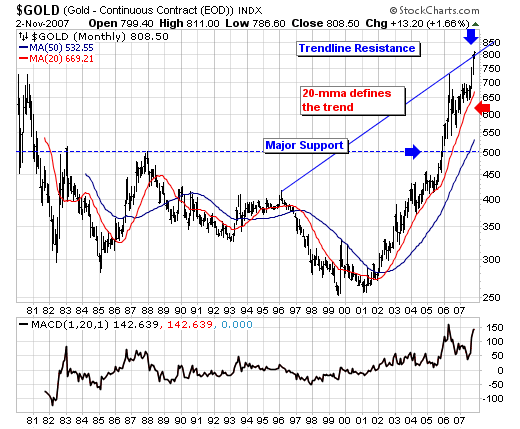