Last month I had the pleasure of sitting in on several local Technical Analaysis User Groups and seeing how they used many different tools to do group stock analysis. It was a very educational experience for me and I strongly recommend that everyone reading this newsletter join your local technical analysis user group. (If there isn't one in your area, why not start one?) Doing technical analysis with other people is probably the best way to improve your investing success - period.

But as I was sitting in the back of one of the classes, I watched them fall into one of the more insidious "traps" in technical analysis these days. See if you can spot it as I tell the tale:

The group was looking at an ETF for one of the more interesting market sectors these days. The person running the meeting pulled up a chart of the ETF on the screen for everyone to see (I was happy it was a StockCharts.com chart!). Someone in the group commented that the chart had a possible "double top" pattern and they were right - it certainly looked like a double-top. Someone else chimed in that the volume bars appeared to confirm that double-top hypothesis (I thought to myself "Yea! They are using volume to confirm chart patterns!") The group leader then suggested that they add some indicators to the chart to see what they showed - so they added a MACD and a Chaiken Money Flow plot to the chart. The MACD looked weak, but the CMF looked bullish. This caused the group to pause and check out a couple of other CMF plots with different parameters. Hmmmmm. Most of the CMF's were bullish. Eventually, the group decided to ignore the CMF data and move on.

Anyone spot the problem yet?

First off, the problem was NOT that the group ignored conflicting information from the CMF plot - it is very common that some indicators will be bullish while other ones are bearish. You need to think about which indicators you trust more and why. In this case, the group discussed it and decided that they trusted the MACD signals and the double-top chart pattern more than the CMF and that was a good decision.

The problem comes from the nature of ETFs. ETF stands for "Exchange Traded Funds" and they are all the rage right now. These are financial vehicles that are designed to track some index very closely and can be traded just like a stock. They are very useful to investors and the number of ETFs has increased dramatically in the past couple of years.

Have you spotted the trap yet?

Before I reveal the problem, let's look at two charts. Here is a chart of $SPX and one of SPY. See if you can spot the key difference: 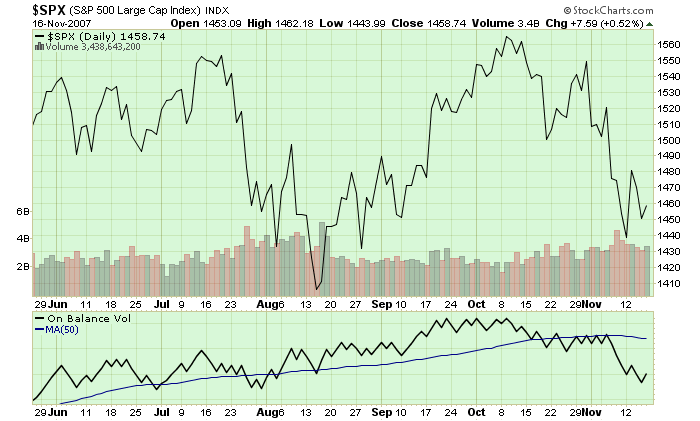 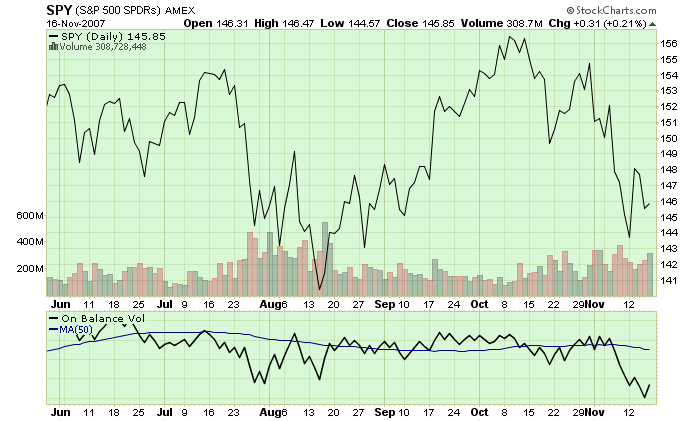 Look at the On Balance Volume indicator line. Notice the difference in the direction of those lines? I've added a moving average line to each plot to help you see that the OBV for $SPX is going up while the OBV for SPY is going sideways/down.

Have you spotted the trap yet?

The price plots for $SPX and SPY look extremely similar - just as they should. When $SPX goes up, SPY goes up and vice-versa. But now look at the volume bars. They don't look identical do they? First off, the volume scales are very different - $SPX ranges from 2 Billion to 6 Billion while SPY's volume ranges from 200 Million to 600 Million. But the bigger problem is that the "shape" of the volume bars aren't exactly the same. They are similar - but there are subtle differences in the position and magnitudes of the taller volume bars. Those differences are what caused the OBV plots to be different. But why would the volume plots for $SPX and SPY be different? Could this be the trap? Will Chip ever get to the point!?

ETFs are different from stocks because of this fact: While the price of an ETF closely tracks the underlying index's value, the volume of an ETF only reflects the popularity of the ETF itself - NOT THE SUPPLY OR DEMAND FOR THE THING THE ETF TRACKS.

Consider the following hypothetical example: Let's say that for some reason an amazingly rich Jillionaire decides that they wants to invest in the market - so they buy 1 Billion shares of SPY in a single day. What would SPY's chart look like?

Despite all of this new demand for SPY, SPY's price chart would continue to mimic the value of the S&P 500 index. It would go up and down in the exact same way as before, just like $SPX does. Of course SPY's volume would have a HUGE spike in it, but that volume spike would have no impact on the price of SPY.

Now consider what would have happened if our hypothetical Jillionaire had invested in a real stock instead of an ETF. In addition to a huge spike on the volume chart, there would also be a huge jump in the price of the stock since the price of a stock is directly related to the demand for that stock's shares.

The key point here is that many kinds of technical analysis make an assumption that is not always true for ETFs. Any form of T/A that relies on studying both price and volume - including chart pattern analysis and price/volume indicators like the CMF - assumes that volume and price are directly related. Since there is no direct relationship between price and volume for an ETF, those analysis techniques should be used very carefully when looking at ETFs.

(Note: The volume for popular ETFs like SPY actually do a pretty good job of mimicking the demand for the underlying index, but that is due to indirect factors. As shown in the charts above, sensitive indicators can be thrown off by those differences. In the case of less popular ETFs, the differences are even greater.)

As I sat in the back of the class observing the give and take around their study of the ETF, I thought about speaking up. Unfortunately the class was almost over and I was late to my next appointment. Fortunately for you, I made a note to myself to write about it in the next newsletter.