Three consecutive economic reports have shown that inflation, after lying dormant for several years, has been rekindled. The Fed, surely armed with the economic data we've seen, decided to lower the fed funds and discount rates by another quarter point each. Slowing growth and a pick up in inflation is not what equity indices want or need. Is higher inflation here to stay or is it just temporary? Based on the Fed's action last week, the Fed likely believes this blip is temporary. They've said as much in previous meetings, acknowledging that commodity prices could continue to put upward pressure on inflation. However, they've also noted that they believe a slowing economy would curb demand for oil and other commodities.

We're in the camp that expects inflation to moderate despite the recent upward pressure. Yields on the ten year treasury bond, while increasing lately, are acting in a normal technical fashion. We discussed a few weeks ago the likelihood that the yield would drop to the 3.80-4.00% support area. That's exactly what happened. The recent jump back up on the yield is a routine retest of the breakdown - very normal technical action. Take a look at the chart on the ten year treasury bond yield below. 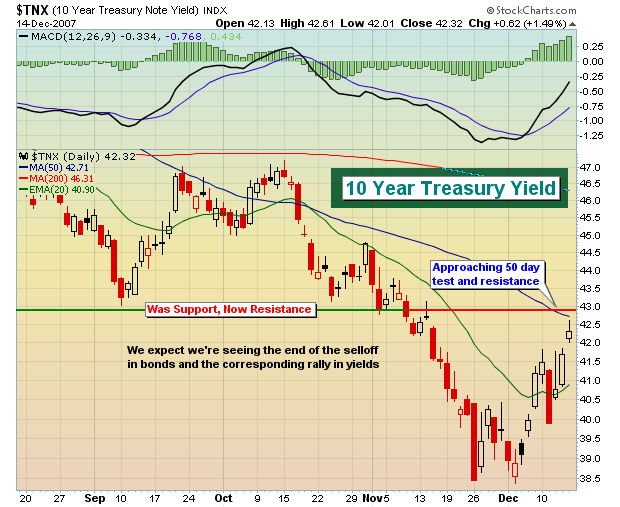