The Transport iShares (IYT) is an ETF designed to match the performance of the Dow Jones Transportation Average. The key industry groups include airlines, railroads, truckers and air freight, all of which are quite sensitive to the overall economy.

After surging in January, the ETF met stiff resistance in February and this week's decline looks like the start of another leg lower. Resistance stems from the 200-day moving average and the reaction highs from late August to mid December. The ETF surged to this zone, stalled and then backed off with a vengeance the last three days. 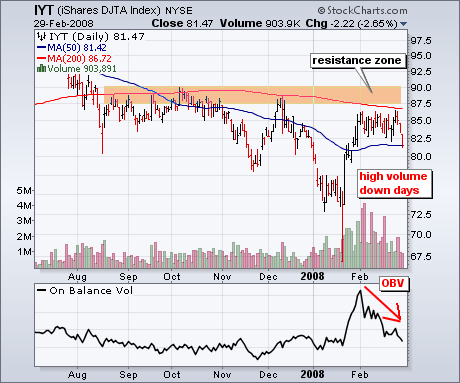 In addition to a failure at resistance, a key volume indicator shows signs of distribution and increased selling pressure. On Balance Volume (OBV) peaked on 1-Feb and declined the last four weeks. Even while the ETF traded flat, OBV was already moving lower. The long red volume bars show high-volume selling that preceded this breakout.