Last week I showed the Japanese Yen testing major chart resistance its 2000/2004 peaks. Today's 2% gain against the dollar put the yen over 100 for the first time in thirteen years (1995). While that's good for the yen, it's not necessarily good for global stocks which have been falling as the yen has been rising since last summer. Another low-yielding currency had a strong day today. The Swiss Franc gain of 1.5% made it the world's second strongest currency and pushed it to a new record high against the dollar. With the dollar and U.S. rates falling sharply today (along with stocks), gold and bonds had another strong day. 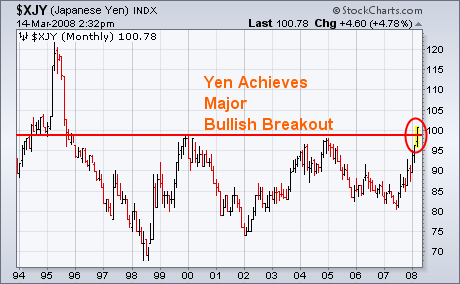