Despite some volatile price action the last few months, the Dow Industrials ETF (DIA) remains below a major support break and has yet to win the battle at resistance. DIA formed a rather large head-and-shoulders pattern in 2007 and broke support with a sharp decline in January. This support zone then turned into resistance and the ETF failed to break back above this zone in February.

DIA is making another challenge to resistance with a surge over the last three weeks. The prior surges fizzled around 127.5 and this is the first level to watch. A close above the February highs (127.5) would be positive for DIA. The bottom window shows MACD moving towards its signal line with an upturn over the last few weeks. A signal line crossover would be positive and show improving upside momentum. 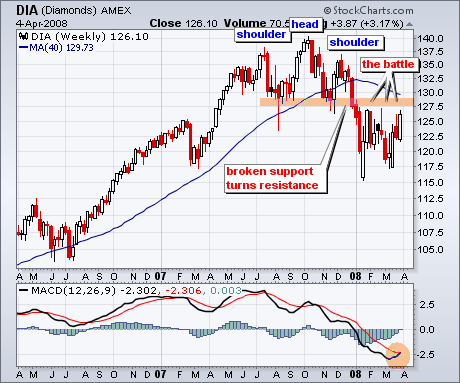