Last week may very well have been an important turning point in the US stock market, with the Dow Industrials and the Russell 2000 Small Caps as forming bullish "key reversal" patterns to the upside. This would suggest an increased probability of further strength on the order of several weeks or perhaps even months; however, we would caution that the probability of such a rally isn't as high as it would be normally given the weak advance/decline figures as well as the up/down volume figures - hence we believe it will be nothing more than a countertrend rally apt to fail. We'd like to have seen stronger advance/decline figures to provide some clarity to these bullish formations, but they simply weren't sufficient for our liking.

Be that as it may, we want to bring collective attention to the Housing Index ($HGX), which did manage to form a bullish "key reversal" accompanied by high volume. This would further suggest a rally of some magnitude is forthcoming; but once again we'll not put as high a probability of it developing as we would have if the broader market had printed stronger advance/decline figures. In any case, we wouldn't be surprised to see mean reversion higher materialize towards the declining 50-week exponential moving average at 145. 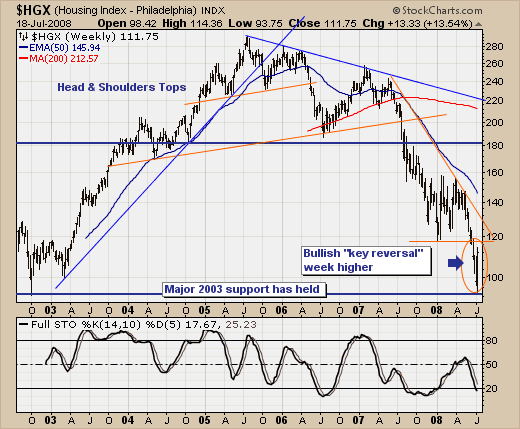 Therefore, we would use any declines in either Ryland Homes (RYL) or Toll Bros. (TOL) to put on a long position. We chose those two given they have performed relatively better than the Housing Index, which clearly broke its January lows. RYL and TOL did not; and if we are going to be long, then we want to be long that which is showing relative strength. As for risk...one can risk a break of the recent lows.